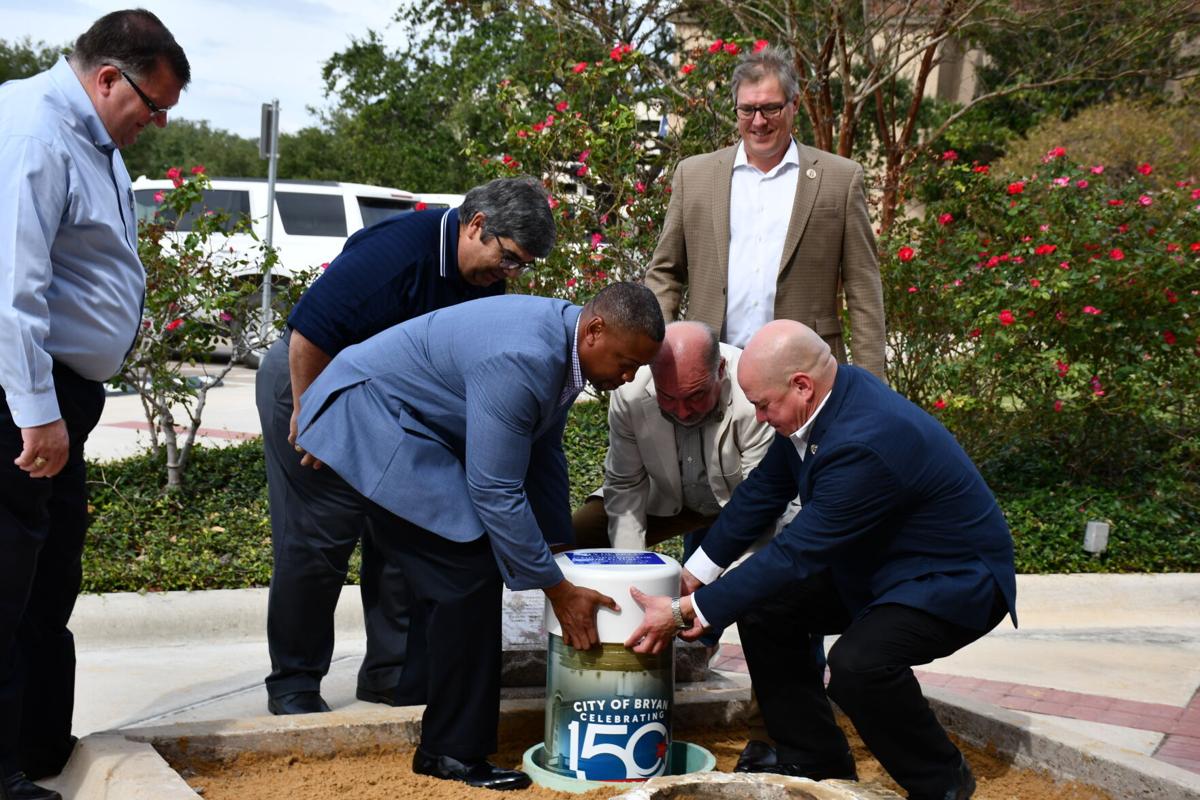 Bryan City Council members Prentiss Madison, Bobby Gutierrez and Reuben Marin place the Bryan 150th time capsule into the ground next to the one buried in 1996 for the city's 125th anniversary. The one buried in 1996 will be opened in 25 years, and the 150th anniversary time capsule, which contains more than 60 items, will be reopened in 50 years. 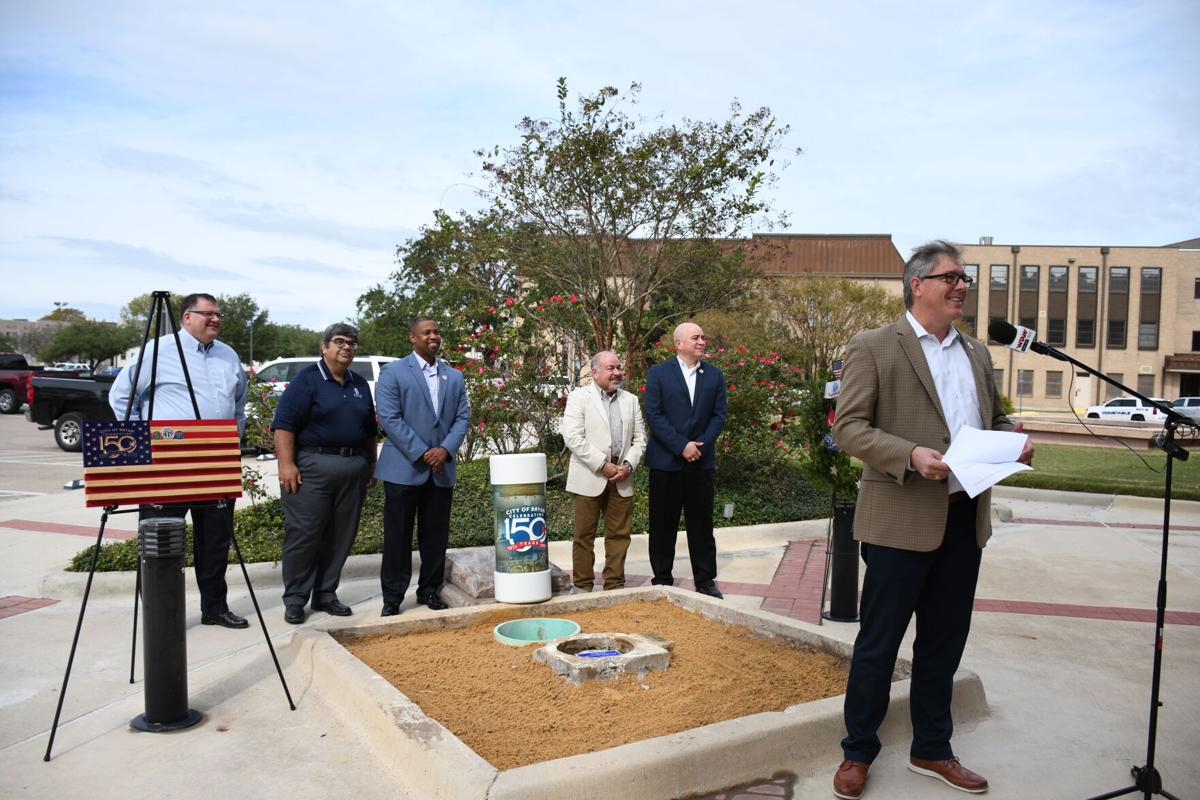 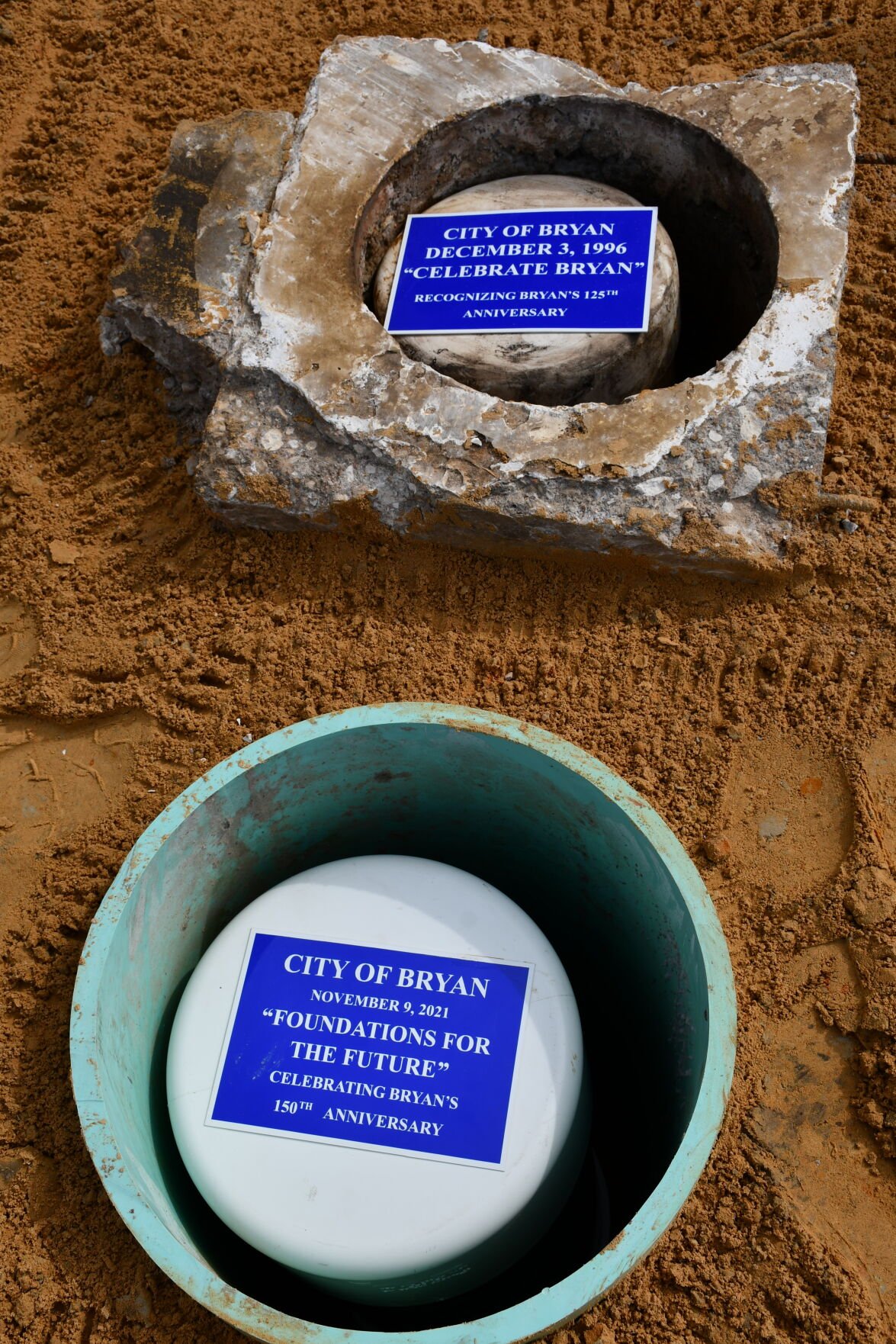 A PopSocket, a face mask, plans for the Midtown and Travis B. Bryan Midtown Park and commemorative challenge coins are among the more than 60 items buried near the parking lot at Bryan City Hall to celebrate the 150th anniversary of the City of Bryan.

The “Foundations for the Future” time capsule that Bryan City Council members and Mayor Andrew Nelson buried Tuesday afternoon during their workshop sits next to the 125th anniversary “Celebrate Bryan” time capsule placed in the ground in 1996.

Mary Lynne Stratta, Bryan city secretary and native Bryanite, was part of the development of the 125th anniversary time capsule and the 150th and said the best part is the public’s participation, saying that is one thing that has remained consistent over the last 25 years.

She said citizens provided items to be included in the time capsule and many more told their stories and shared photographs and other items to celebrate the 150th anniversary through the city’s special commemorative website.

“It’s just been a great feeling to watch these people share their stories and their histories here in Bryan and bring in their precious artifacts and loan them to us and sit down and let us record them and videotape them,” Stratta said. “That hasn’t changed. Bryanites are still very proud to be Bryanites. That’s been exciting to see.”

Tuesday’s event kicked off the 150th anniversary celebrations that will include a free concert Friday at the Palace Theater featuring the Bryan school district’s Mariachi Bands, Kane Alvarado and Midnight Express and a community Thanksgiving meal Saturday.

Saturday’s meal at the Brazos County Expo is sold out with about 800 guests and hundreds more on the waiting list. Only those who have received a confirmation email from the City of Bryan staff will be allowed admission to the event.

She said council members and mayors who have died over the years would be proud of the city.

“They’d be proud. I know I am. Very proud of Bryan and where we’ve come,” Stratta said. “I’ve always been proud of Bryan, but wow have we come a long way in the 25 years since we buried that one.”

At 9 a.m. Nov. 29 – the actual 150th anniversary of the incorporation of Bryan – the city will have a drone photo of city staff and any community members who want to join.

Putting everything together for the 150th has been a lot of work, Stratta said, but a lot of fun also.

“The main thing, I think, is just watching the community come together and come in and share and just wanting to be a part of it,” she said. “When you have citizens that want to be a part of something like this, that tells you you’re doing something right, and I credit the citizens with that. We’ve got great folks here in Bryan.”

Councilmember Reuben Marin called it an honor to be part of the celebration and to be a member of the City Council that buried the 150th anniversary time capsule to be opened in 50 years.

“We’re headed in the right direction right now, and we want to continue that growth,” he said. “And in 50 years when we open that time capsule, hopefully we’ll see that. We’re excited.”

Councilmember Prentiss Madison said the current council has built upon the groundwork laid by previous councils and carried the torch into the future.

“We hope that the city continues to head in the right direction, and in 50 years, I hope we can open the time capsule, and it’ll be like, ‘Wow, they envisioned this,’” he said.

Stratta, who has served as city secretary for 31 years, said Bryan is forward-looking now and she sees the time capsule as the city burying its dreams for the future, saying those dreams will be reality for the people of Bryan in 50 years.

“It’s basically we’ve put our vision in there,” she said. “… We’re not there yet, so it’s almost like we buried our vision for the future, so in 50 years they’ll get to see how we did. To me, that’s very exciting.”

When comparing the contents of the two time capsules, she said, the 150th has more plans and documents, while the 125th had more mementos and souvenir-type items, such as a floppy disc and library card #125 after the library moved to its automated system in 1996.

The time capsule buried Tuesday includes a print out of the city’s 150th anniversary website, Stratta said, noting they worried the people who open the time capsule in 50 years might not know what a flash drive is or have a way to read it in a way, similar to how she expects people to react to seeing the floppy disc when the 125th anniversary time capsule is opened.

Stratta said the dedicated space for time capsules has enough room for nine cannisters, and she hopes the city continues the tradition and buries another one in 25 years. She hopes to attend the ceremony in 2046 when the 125th anniversary time capsule is opened.

For more information about Bryan’s 150th anniversary and celebrations and to experience people’s stories and artifacts, go to 150.bryantx.gov.

The following will be closed in the Bryan-College Station area in recognition of the Thanksgiving holiday:

The challenge of finding what soothes the pain

In the journal JAMA Network Open, research on the long-term effects of contracting COVID-19 shows that at least 50% of COVID-19 survivors expe…

Bryan City Council members Prentiss Madison, Bobby Gutierrez and Reuben Marin place the Bryan 150th time capsule into the ground next to the one buried in 1996 for the city's 125th anniversary. The one buried in 1996 will be opened in 25 years, and the 150th anniversary time capsule, which contains more than 60 items, will be reopened in 50 years.