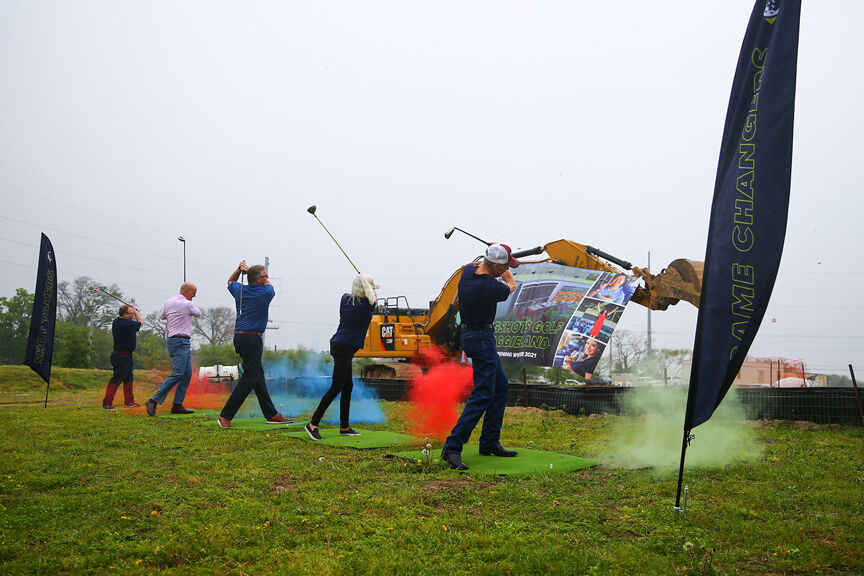 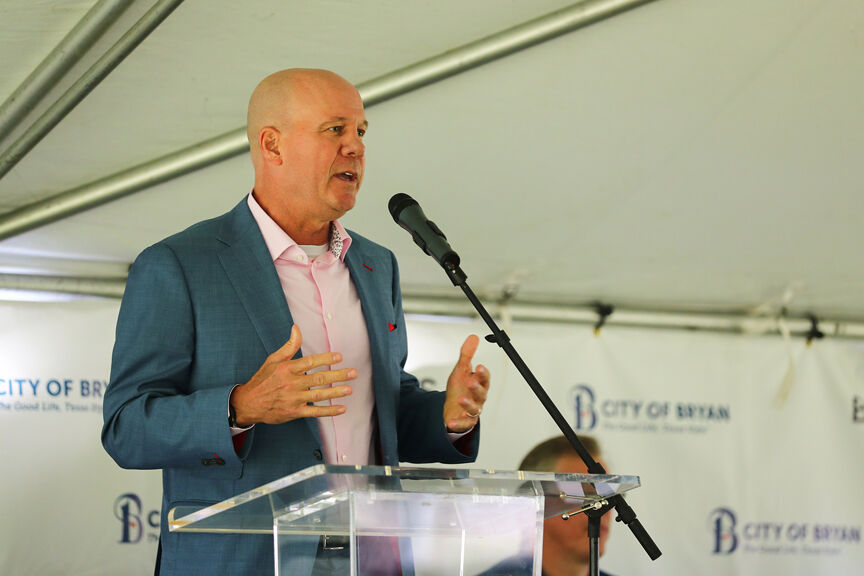 ClubCorp CEO David Pillsbury speaks during an event at the site of the future BigShots Golf Aggieland at Travis Bryan Midtown Park on Wednesday, April 7, 2021. 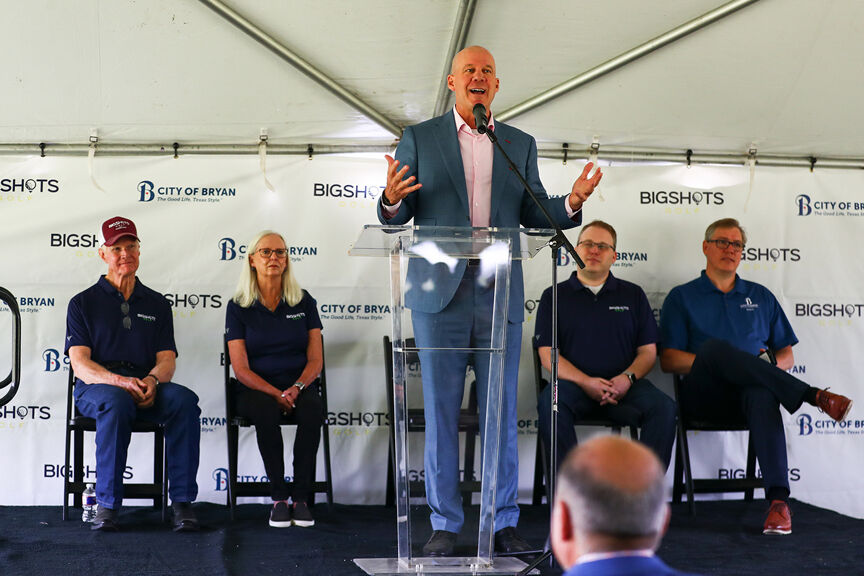 Bryan city leaders joined together on Wednesday to celebrate progress made on the upcoming BigShots Golf Aggieland facility, which is expected to be open in December.

The two-story, 40,000-square-foot dining and entertainment venue was supposed to open in the Travis Bryan Midtown Park on West Villa Maria Road this spring but was delayed by the COVID-19 pandemic. ClubCorp CEO David Pillsbury said there was a time at the start of the pandemic that ClubCorp, which is BigShots’ parent company, wasn’t sure it was going to survive. Toward the end of last year, he said the company started being able to rebuild and get back on track with projects like BigShots Aggieland.

Despite the delay, local BigShots Golf Aggieland Partner Jim Butler said that the time was not wasted. He and his wife, Allyson, who is also a BigShots partner, have been working on creating and testing a menu and developing HR policies for when employees are hired.

“We’ve made progress,” Jim Butler said. “It’s not visible progress like we’re seeing now with the construction, but I’d say in some ways we’ve made the best of a delay in construction and delay due to COVID.”

The Butlers are Bryan-College Station community members who first put the BigShots project into motion. When the project was announced in February 2020, Jim Butler said that he learned to play golf on the former municipal golf course that is now the Travis Bryan Midtown Park, and he said he is excited to bring in a business that allows others to enjoy a similar experience at the same site.

Yesterday, Jim Butler told attendees that he hopes BigShots Aggieland will be a place that helps raise money for local charities and is a favorite destination for visitors.

Wednesday’s festivities gave the dozens of attendees a chance to sample food and drinks that will be offered at the new facility, including a PB & Jam Burger. During the celebration, leaders including Mayor Andrew Nelson and the Butlers simultaneously hit golf balls that exploded into different colors.

According to a January BigShots Golf press release, the Bryan location will have 60 game bays where novice players, families and children can play interactive games such as Knockout and Pinball, while avid golfers can play full rounds on virtual golf courses all over the world. The new location will be the fourth nationwide.

Pillsbury said that the Bryan location will be the first company-owned BigShots location, as opposed to being a franchise location.

“You can feel the warmth of the people of Bryan-College Station,” Pillsbury said as he commented on Wednesday’s event. “This is just a wonderful, welcoming place. We just can’t think of a better place to be for BigShots Golf. We are just so proud to be part of the community.”

Villa Maria Partnership LLC is made up of two other LLCs, one managed by the Butlers and the other by ClubCorp.

The loan from the city will help pay for some of the infrastructure work, Pillsbury said. He added that if it were not for the city’s loan, the BigShots in Bryan likely would have been delayed until a later date.

The facility will cost a bit over $16 million to construct, Pillsbury said. Construction began in January. Pillsbury said that so far infrastructure work is being done and the project is currently “slightly ahead of schedule.”

Jim Butler said that the employee search will begin late this summer and that events will likely be scheduled starting in the fourth quarter of the year.

All Bryan City Council members were in attendance on Wednesday. Councilman Reuben Marin said he enjoyed the celebratory event. He added that BigShots will complement the 125,000-square-foot indoor facility that is being built in the park and will be open in September 2022.

“Having an attraction like this here is going to be awesome,” Marin said of BigShots. “So we’re excited.”

The Bryan City Council approved the adoption of the Midtown Area Plan at its Tuesday night meeting, but there is still much to be done before …

ClubCorp CEO David Pillsbury speaks during an event at the site of the future BigShots Golf Aggieland at Travis Bryan Midtown Park on Wednesday, April 7, 2021.