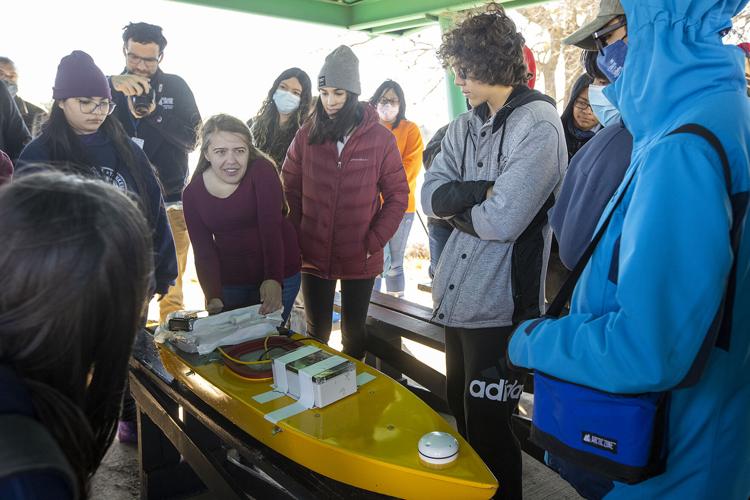 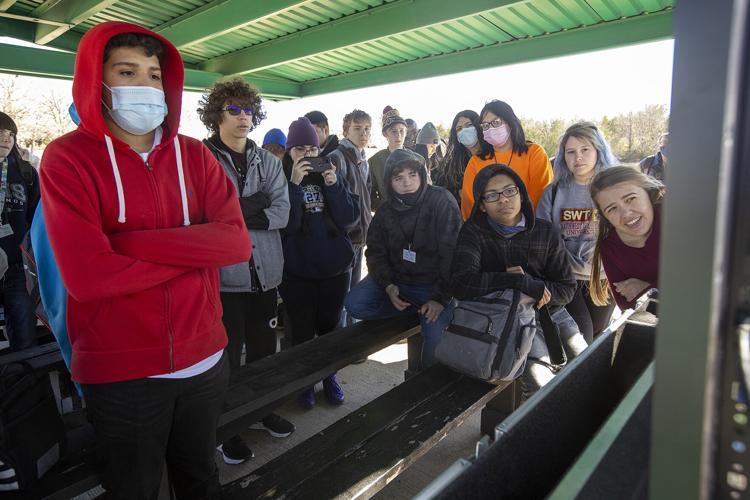 “The purpose of the program is to transfer great research and try to get it in the hands of communities for emergency response and resilience and recovery,” Robin Murphy, principal investigator and professor in the Texas A&M College of Engineering, said.

Friday’s meeting at TEEX’s Disaster City was the kickoff to the program that is one of 17 National Science Foundation’s Civic Innovation grant projects, she said. They will meet again in May when each school will present their findings to the emergency managers, and some students will be selected to take part in an internship.

Of 400 university consortiums that applied for Stage 1 of the grant, 52 were selected, Murphy said. Then, of those 52, just 17 were chosen from throughout the country to receive full funding. For the Texas A&M-led program, the full one-year grant is for $384,000.

Students from Bryan and Galveston Ball High School spent half the day Friday at Disaster City learning about the program and discussing data collection and analysis, using drones and robotics – unmanned aerial and marine systems. Then they went to the RELLIS campus for the second half of the day to learn how to fly drones so they can receive their FAA Part 107 drone piloting licenses.

The students participating from Houston could not travel to Bryan-College Station due to COVID restrictions put in place by the school district, Moats said.

“We’re looking at that informal learning,” she said. “The teachers know what they’re doing. We’re just giving them projects to choose from. We’re letting them integrate it into their classroom, or not.”

Each school will select one project to focus on and will collect and analyze real-life data for it, working throughout the project with emergency managers who need and can use the findings.

One Saturday each month, the students will go out to collect field data and then get feedback from the emergency managers.

Moats said the students become “force multipliers,” working on real-world problems and with real-world data that will directly impact communities in wildland urban areas, urban centers and in coastal communities.

“This is not the story problem of the train coming from New Orleans,” he said. “… Because it’s being overseen by the researchers and overseen by the emergency managers, the data they collect is what’s needed and will go directly into helping solve some of the really tough problems we have, and mitigating the effects.”

Justin Barrett, a computer science teacher at Rudder High School, said he is excited to continue in class the conversations that began Friday as the students brainstormed ideas and heard how they can help the Bryan Fire Department and Texas A&M Forest Service.

Then, the collaboration to find out who they need to reach out to, what they need to research and what they need to ask will teach them as much, or more, than a regular classroom assignment, he said. Beyond the skills the students will learn through data collection and analysis, he said, they will also gain critical thinking skills.

Naomi Pittman, a senior at Rudder High School, said she enjoyed learning about the drones and plans to study technology engineering at Texas A&M University-Galveston, where she could one day program drones and work with the software.

Bryan Collegiate High School freshman April Saucedo said she plans to become a lawyer, but is looking forward to participating in a program that will help prevent disasters.

“I feel excited for what we’re planning to do,” she said.

Pittman noted a boost would give to their resumes as they leave high school.

“I feel like this would look great on your resume, not only that you learned this in high school, but as a female you can get more opportunities for it,” Pittman said.

Barrett called it “resume ammo” and said he was excited to give Bryan students a “leg up” and experiences they can cite when asked in a job interview how they have used computer science in the real world.

“We need it too, and these kids, they’re just as smart, just as motivated,” she said. “It’s great to get it in front of them.”

The students who participate will earn College, Career and Military Readiness certifications in addition to any technical certifications, and the participating teachers and students will be paid for the extra time required.

In the future, Murphy said, she would like to see the program expanded into other Texas communities, such as Beaumont, comparing it to a franchise.

“Really, it’s about us and our communities and us using all the tools that are there,” she said, noting it also gives students a better understanding of local government.

Two people were hospitalized after a shooting early Sunday morning in Bryan, according to Bryan police.

The College Station ISD Education Foundation awarded more than $154,000 in scholarships to 115 graduating seniors at its annual scholarship aw…

Wellborn-Holleman intersection to close for six weeks for construction

A construction project will close the intersection of Wellborn Road and Holleman Drive for approximately six weeks beginning Sunday.

A former Texas A&M doctor was arrested Wednesday on two charges of sexual assault from separate incidents with two different victims in 2021.