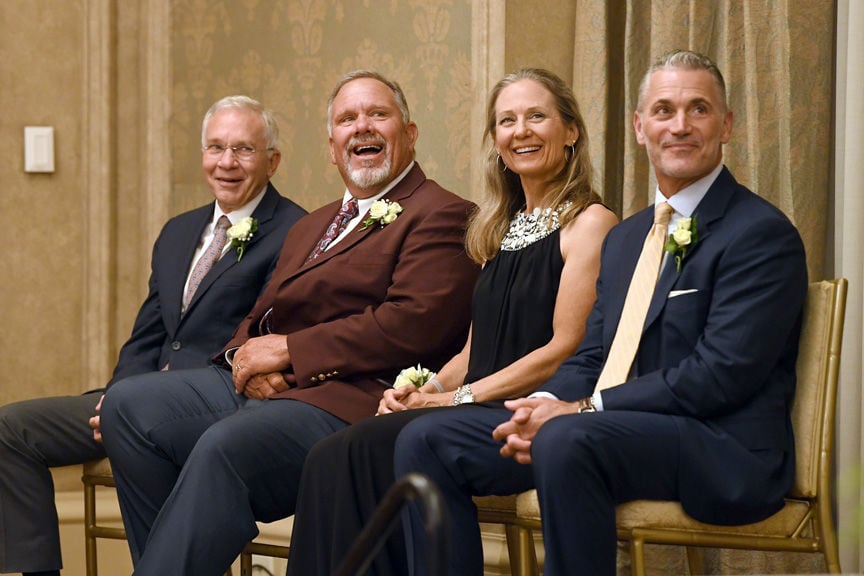 Honorees Dr. Guy Clifton, left, Charles Mancuso, Connie Smotek and Chris Hanslik sit near the stage as they are recognized during the Bryan ISD Hall of Honor induction ceremony at the Miramont Country Club on Saturday, August 17, 2019. You can read more here and view more photos here. 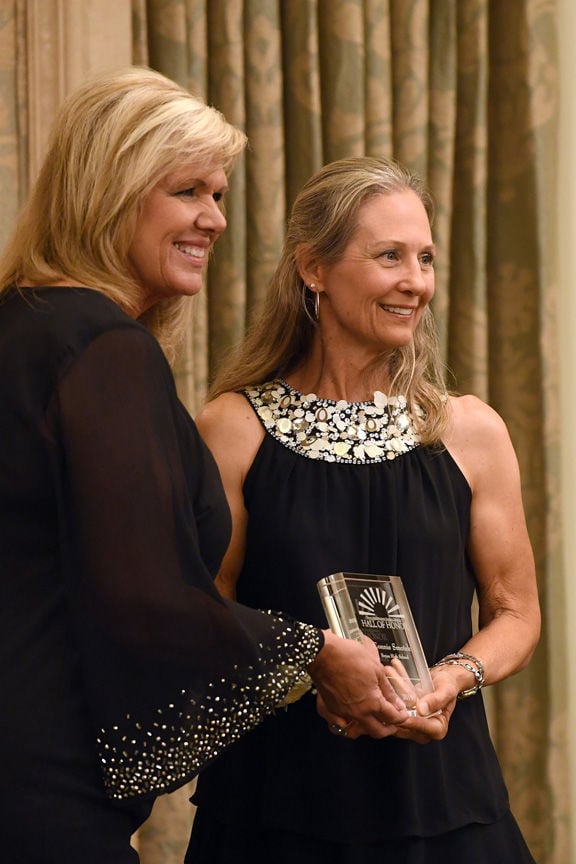 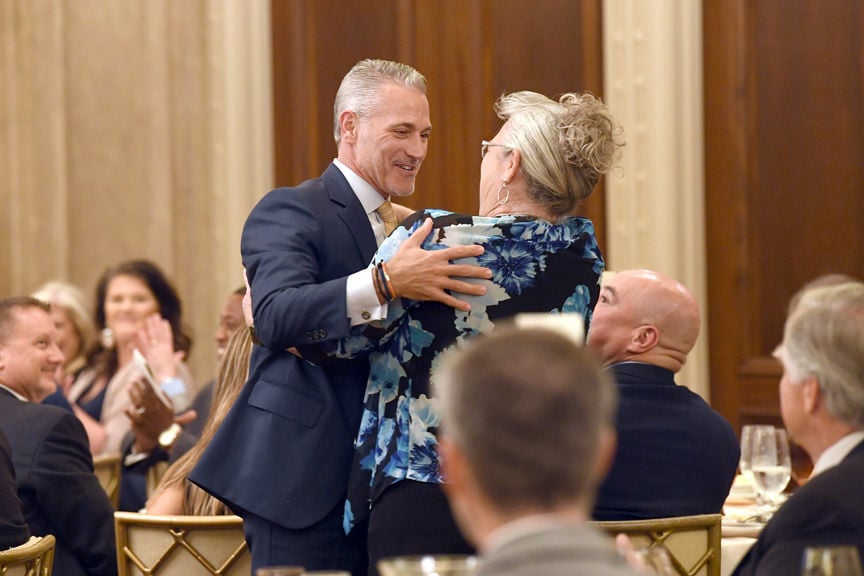 Bryan ISD Hall of Honor inductee Chris Hanslik is reunited with his high school science teacher Debbie Richards on Saturday during the ceremony at the Miramont Country Club.

The Bryan ISD Education Foundation inducted four new members into its Hall of Honor on Saturday and raised tens of thousands of dollars that will in turn benefit the district, its teachers and its students.

“This is definitely a reflection of our community for folks to come out and to support the foundation, which in turn supports the school district,” Bryan ISD Education Foundation Executive Director Harry Francis said. “This is what it’s all about.”

This year represents the 20th year for the education foundation, he noted, and also will mark the year they pass the $1 million mark in student scholarships handed out.

Each of the honorees noted their favorite classes and teachers.

“There’s so many teachers and coaches that put so much into me and my classmates that we’re forever grateful, and words don’t really do justice to express that,” Hanslik said. “They deserve the recognition. We should have a teachers’ hall of fame, because they’re the ones that really put the work in to help people turn out. All the dedication and time that they put into these kids is amazing.”

Hanslik, a Houston-based attorney, graduated from Bryan High School in 1988 and counts his biology teacher Debbie Richards, who attended Saturday’s event, as one of his favorite teachers.

To receive the recognition, he said, is humbling.

“Certainly think the other three were more deserving than me, but it’s always nice to be recognized,” he said. “I know there are many other graduates from the Bryan school district that are equally deserving, so to be among that, I take that with a lot of pride and a lot of honor in that. I always have been and always will be proud to be from Bryan, Texas, and I let people know that.”

The community, in addition to the school system, helped shape him into the person he became, he said.

Clifton, a neuroscientist in Houston, graduated from Stephen F. Austin High School in 1967 and said he is honored to be associated with the school district.

While in Bryan schools, Clifton counted art and junior and senior English literature classes as some of his favorites, he wrote in his biography. “The level of community support and leadership for this public school system is just really impressive,” he said about the event. “I’ve been to community events in Illinois and Virginia and other places, I’ve never seen this level of community support and, really, leadership. It was really impressive.”

Mancuso, a local business owner, graduated from Bryan High School in 1981 and played a large role in the cleanup process along the Texas coast following Hurricane Harvey.

Though he enjoyed school, he said, it is not until he became an adult that he really understood what his teachers did for him and learned how much respect he had for them.

Smotek, who works with the Texas A&M AgriLife Extension Service, is a 1982 graduate of Bryan High School who went on to compete in the 1992 and 2004 Olympic Games.

She called the recognition “a tremendous honor.”

“[It’s] humbling to be involved and nominated,” she said.

Before the night ended, the event raised $39,790 in the live and silent auctions.

The night also included the introduction of new community of learning award: the Taylor Essential Eight Award, presented to those who live the Essential Eight, introduced by Bryan Superintendent Christie Whitbeck.

“It’s very moving. My son was an amazing person. He endured a lot in his life, and yet he was optimistic, and that’s one of the eight, and he was never unkind to anyone,” Whitbeck said. “He epitomized these things, and I’m proud to have been his mom and I hope I had something to do with that. That’s all you can do is treat people right, do what’s right and I just hope our children in this district benefit from this whole initiative because it’s going to only deepen. I’m really honored.”

Thanking the teachers and administrators in the audience, Master of Ceremonies Mike Wright said, “You never know what little moment of kindness and sincerity that you spend with that child and the impact that you have with them, you’re right, they may be sitting up here as a neuroscientist, someone who’s making life better around them.”

Hanslik noted, “With a good education, the sky’s the limit.”

The spring can be a stressful time for third graders as they prepare for their first year of state standardized testing, but Crockett Elementa…

Honorees Dr. Guy Clifton, left, Charles Mancuso, Connie Smotek and Chris Hanslik sit near the stage as they are recognized during the Bryan ISD Hall of Honor induction ceremony at the Miramont Country Club on Saturday, August 17, 2019. You can read more here and view more photos here.

Bryan ISD Hall of Honor inductee Chris Hanslik is reunited with his high school science teacher Debbie Richards on Saturday during the ceremony at the Miramont Country Club.