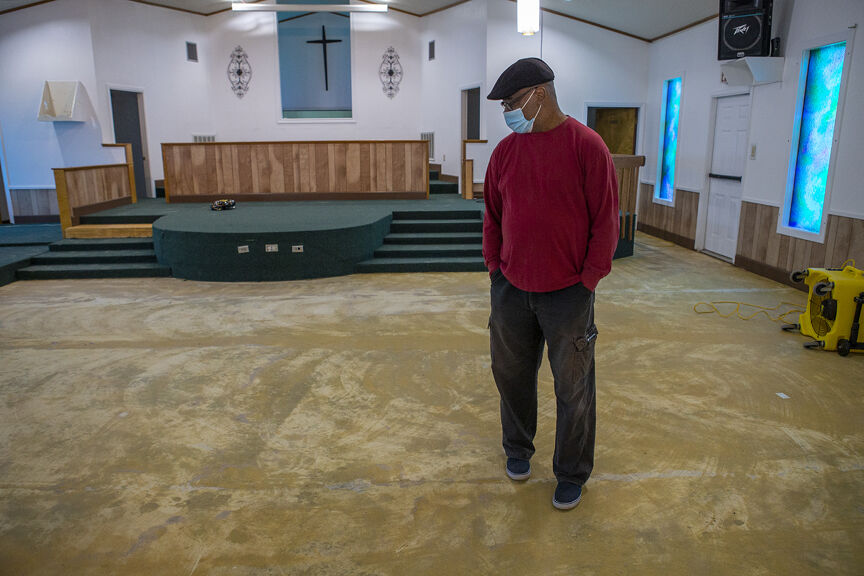 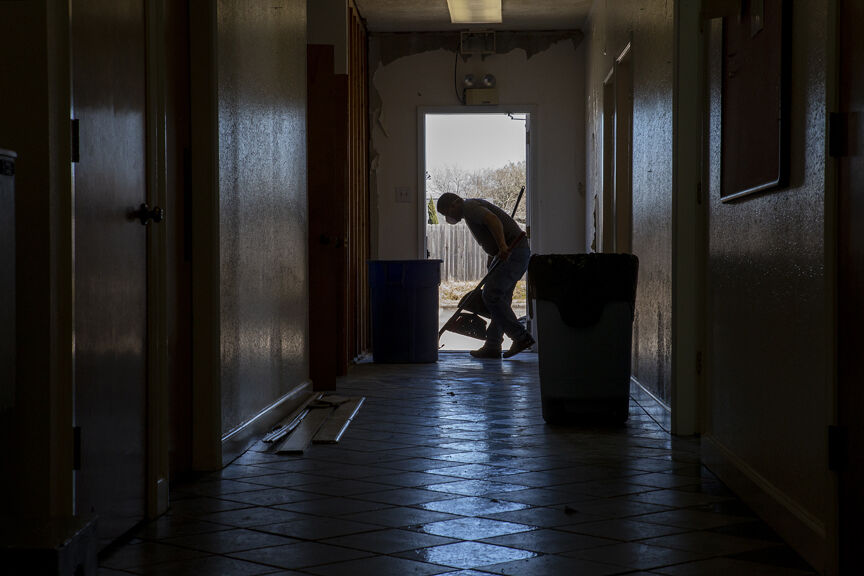 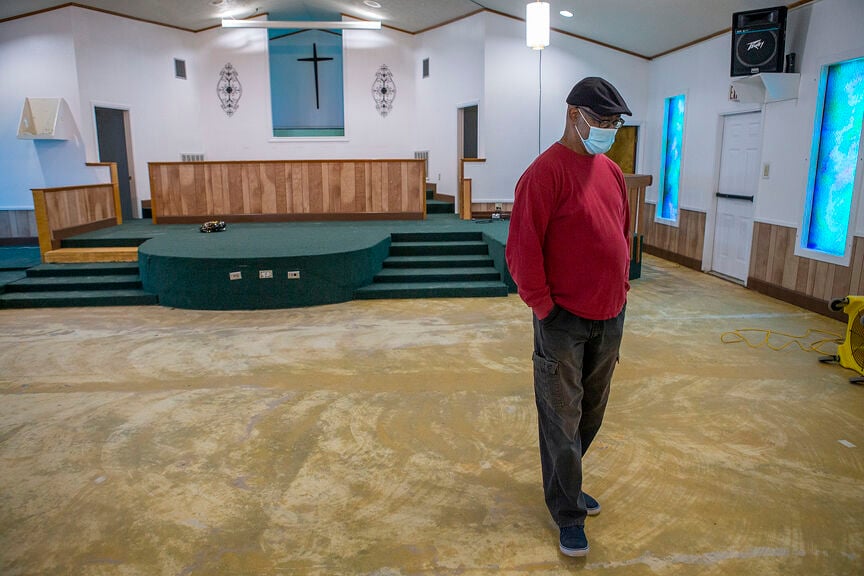 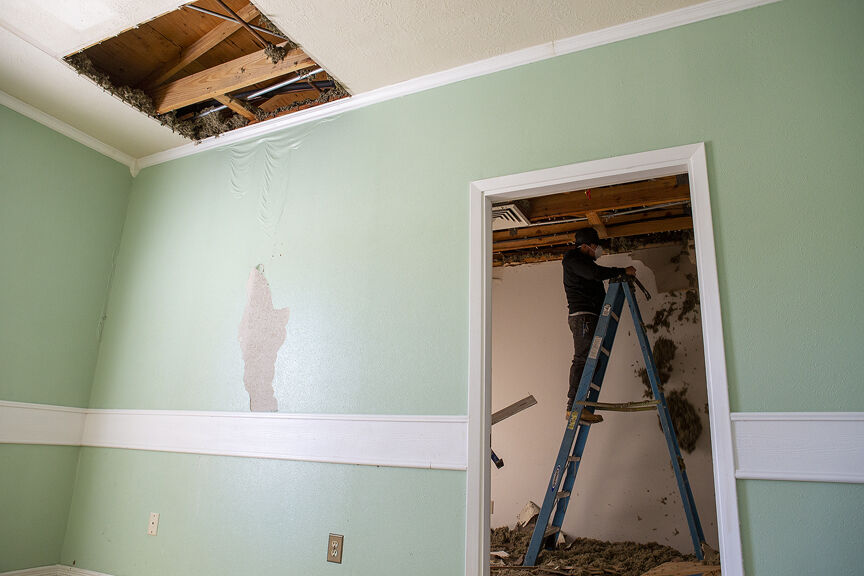 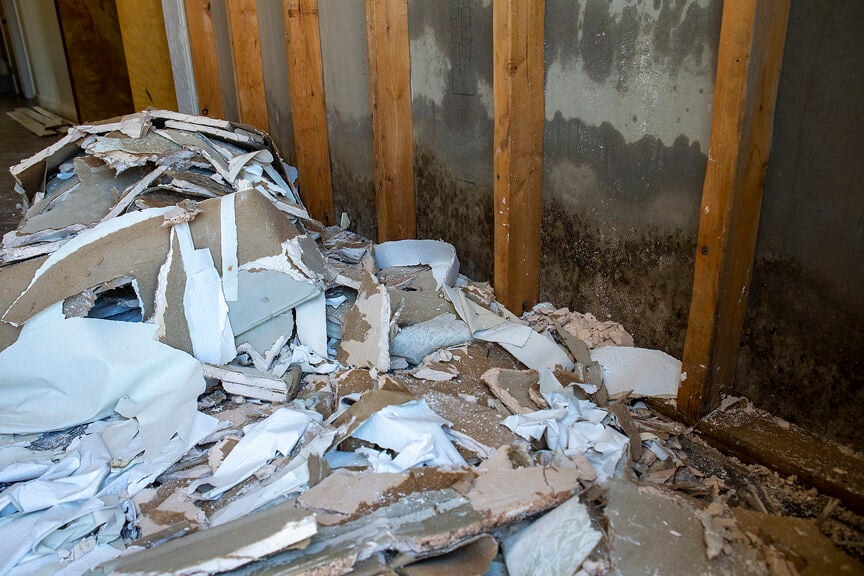 Mold growth is shown as a result of water damage at New Birth Baptist in Bryan on Tuesday, Feb. 23, 2021.

As the Rev. Sam Hill, pastor of North Bryan New Birth Baptist Church, showed The Eagle the extensive flooding damage his church building sustained during last week’s winter storm on Tuesday afternoon, Jim and Melissa Marucci parked their car in the New Birth parking lot and got out, a purple envelope in hand.

The Maruccis, who attend New Heights Church and live in Bryan, had heard of the damage at New Birth — several pipes burst in the ceiling Thursday due to frigid temperatures — and felt moved to bring by a financial donation.

“We’ve just been praying for the church and wanted to give something for them,” Melissa Marucci said. “The church is the bedrock of our society,” added Jim.

“Thank you for this and for your prayers,” Hill told the couple as they spoke.

New Birth and several local churches, businesses, homes and other facilities have been dealing with devastating damage wrought by last week’s winter weather and subsequent outages.

“When I got here, water was running out the front door and completely flooding the church,” Hill said of finding out about the burst pipes last week. He said the city eventually had to cut the water off, and almost the entire building sustained some damage. On Tuesday, staff members from Capital Construction Services worked to repair ceilings, walls and other damaged infrastructure.

New Birth, with approximately 80 members, has been meeting virtually for almost a year due to the COVID-19 pandemic, with church staff leading worship in an empty sanctuary as attendees participated from home.

Additionally, Hill said that because of inclement weather on Feb. 14, at the start of the winter storm, church staff got what turned out to be a “dress rehearsal” for this past Sunday at leading worship from their own homes instead of in the sanctuary.

Hill said players and coaches from the Rudder High School volleyball team helped pull up carpet in the sanctuary and move items in the building over the weekend, and said other local pastors and community members such as the Maruccis have lent various forms of support. He described the church’s members as resilient and prayerful even as they struggled with news of the extensive damage. Costs of needed repairs have not yet been calculated.

Faith UCC’s water heater burst in the church’s attic after the electricity had gone off, causing Gates’ office, the administration offices, an electrical room and the women’s bathroom to flood with an inch of water. With no local companies immediately available to help clean the water and damage,

the church wasn’t dry until Tuesday after Gates said Faith UCC’s property volunteer was able to use a dryer-type machine to clear out all of the water.

The extent of the damage is unknown at this time, Gates said. He added Faith UCC hopes to get an insurance adjuster out this week to provide more information.

Still, Gates said Faith UCC’s property volunteer was hopeful Tuesday the church could hold an in-person service this Sunday after being all online last Sunday. However, Gates said that might be “wishful thinking.” Faith UCC returned to holding in-person services last October with a mask mandate and social distancing guidelines in place as well as a virtual option.

Micah Turner, general manager at the Phillips Event Center on Briarcrest, said the facility sustained significant flooding damage after the fire suppression systems froze and then burst a week ago, which caused more than 4 inches of water in the building. The facility remains without power and water, Turner said, and added that an insurance adjuster surveyed the damage Tuesday.

“We’ll be putting together a short-term and long-term plan to reopen individual parts of the event center as we’re able to,” Turner said. He said his staff team has been working to help those who had weddings, civic meetings or other events planned at the center to find alternate sites or dates.

Texans whose properties were damaged by snow and ice during last week’s storm may apply for federal funds for repairs. People with insurance should first contact their insurance company and then FEMA, but those without insurance can go directly to DisasterAssistance.gov or call 1-800-621-3362 to start filling out an application. Small business disaster loans through the U.S. Small Business Administration are also available and information can be found at fema.gov/disaster/4586.

The cities of Bryan and College Station have both waived permit fees for residential or commercial repairs related to the winter storm until Feb. 28 and March 7, respectively. Learn more at blog.cstx.gov/2021/02/19 or at bryantx.gov/permit.

Nonprofits across U.S. create unique ways to house the homeless

Nonprofits across U.S. create unique ways to house the homeless

The most prevalent concern drivers may notice are more potholes in areas where water got into the roadway pavement.

Timeline of the historic winter storm in Bryan-College Station

From Feb. 11 when TxDOT began treating roads and bridges to Friday when the state’s grid operator announced a return to normal operations, her…

Mold growth is shown as a result of water damage at New Birth Baptist in Bryan on Tuesday, Feb. 23, 2021.