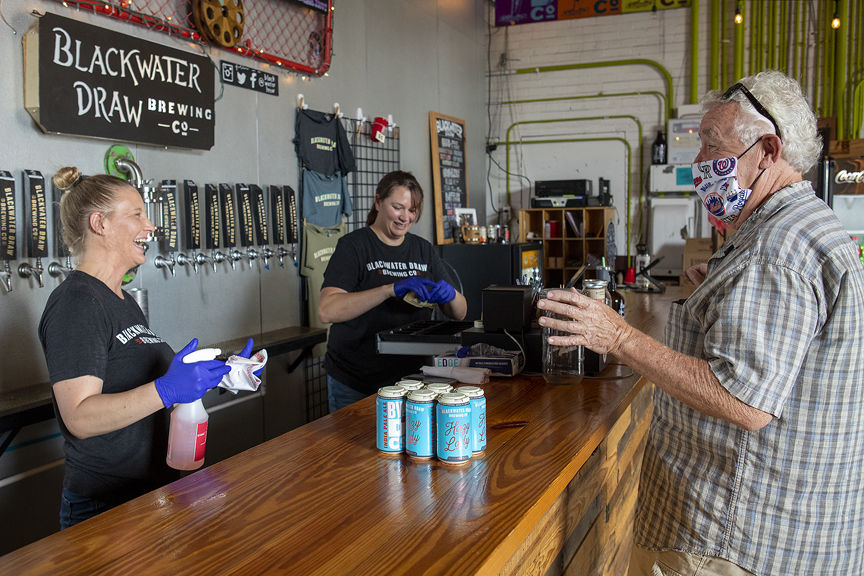 Employee Kendal Corrington, from left, co-owner Stephanie Steele and patron Pat Quinlan share a laugh during a transaction at Blackwater Draw Brewing Company on Main Street in Bryan on Friday, May 22, 2020. 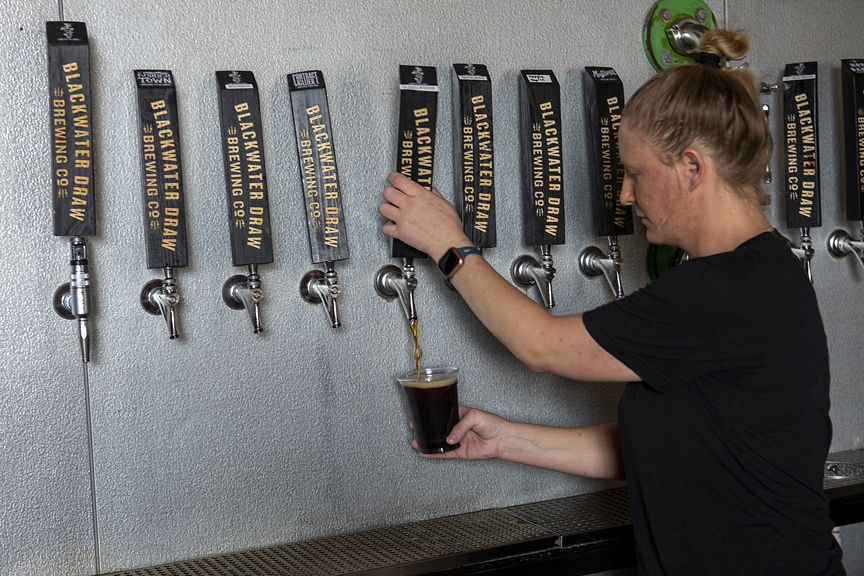 Employee Kendal Corrington pours a beer at Blackwater Draw Brewing Company on Main Street in Bryan on Friday, May 22, 2020. 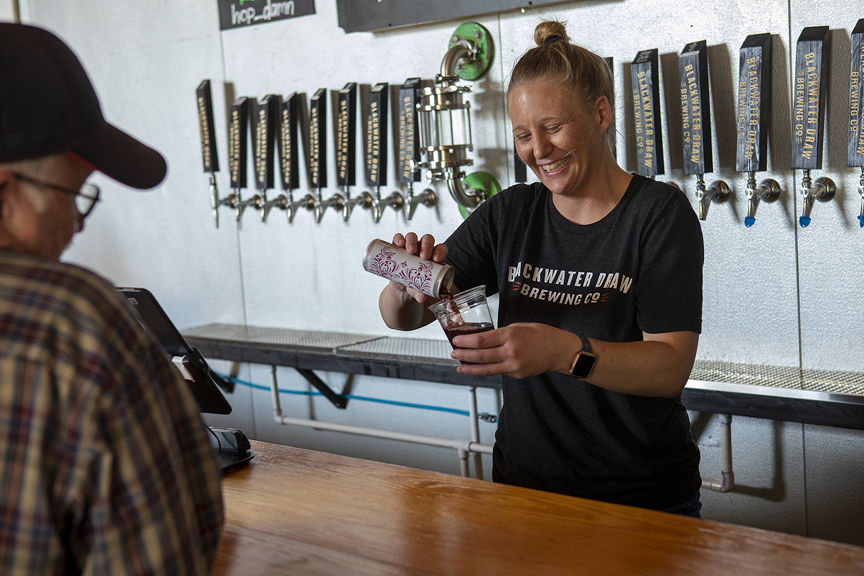 Employee Kendal Corrington pours a can of wine at Blackwater Draw Brewing Company on Main Street in Bryan on Friday, May 22, 2020.

As bars, bowling alleys and aquariums reopened across the state, Bryan-College Station business owners welcomed a small but steady flow of customers Friday.

Grand Station Entertainment in College Station opened its doors at noon Friday for the first time since March, when Gov. Greg Abbott issued an executive order as a result of the COVID-19 pandemic. According to Stephanie Lara, marketing and sales manager for Grand Station, a typical Memorial Day weekend would bring in droves of customers.

“Today it is a little slower, and we are more limited in what we can offer,” she said.

Meals are available at Grand Station, and 20 bowling lanes remain open. The center’s arcade, miniature golf course, laser tag arena and restaurant seating remain closed. Six bowlers are allowed per lane, Lara said, and bowling shoes are cleaned between each use. Customers also are required to clean their hands with sanitizer upon entering the building. Additionally, staff members wear face masks and are screened for fever and other symptoms before each shift.

“So we have heightened up sanitation procedures heavily in between each use,” she said. “Bowling balls, touch pads and booths are wiped clean, and we are covering touch pads with plastic, so if someone feels comfortable using it that way instead of touching the pad [directly], they know we switch out the plastic every time.”

The business is also operating under a shorter schedule with adjusted hours and limited discounts. As of 6:30 p.m. Friday, Lara said she estimated about 15 of the 20 open lanes had been used, with 25% of customers opting to wear masks.

“Today we have seen quite a few families,” she said. “This morning we were welcomed by our senior bowlers who typically bowl Friday mornings.”

Lara noted the business is considering hosting a time period when only senior citizens would be permitted to bowl.

Across town in the Northgate entertainment district, several bars welcomed customers. Duddley’s Draw general manager Thomas Ayars said his bar had, upon the first week of closing, attempted to maintain a flow of income by offering drinks to go, but that model was not financially sustainable. Additionally, the bar lost eight of its 14 employees, as many Texas A&M students working at Duddley’s lost their local housing. For the remaining staff, Duddley’s was able to keep payroll afloat with a small business loan.

“Duddley’s, until March 28 this year, has not closed once — not even on a holiday — in 43 years,” he said. “It was hard to lock the doors and know we would not come back again. ... I think we were all ready to go [back]. As soon as we got the OK, we knew we would open. We have actually been cleaning all week, wanting to open this week or next.”

Dennis Weaver, a daily customer of Duddley’s since 1992, said that he missed the bar and its crowd so much that he and several patrons formed a Zoom video chat group called “Dud’s Buds” who would have beer together virtually each Friday.

“It’s a good feeling to be back, because seeing people in person is better,” Weaver said.

“We are minimizing contact between us and customers,” Ayars said.

In Downtown Bryan, Blackwater Draw Brewing Co. opened its tap and public seating to a bustling crowd of customers Friday afternoon. Co-owner Chris Weingart said the brewery had lost a significant amount of business during the shutdown, both from lack of tap sales and from wholesale customers forced to cease operation. Offering beer for pickup through the Blackwater Draw website was crucial in keeping the business owners’ heads above water, he added. Several staff members were furloughed and applied for unemployment.

With 80% of Blackwater Draw’s income resulting from tap service and foot traffic, Weingart said the brewery likely will be extending its taproom hours.

“It makes a big difference to us even having a few people come through,” Weingart said. “I think people are happy to just get out of the house, sit at a table and have a drink with friends.”

The brewery team took measures to ensure a safer environment, offering plastic single-serve cups and limiting seating inside and on the patio. Staff members are not required to wear masks, but Weingart said he had spoken with employees about not clocking in to work with symptoms.

“It’s more of a thing where we’re very cognizant of the dangers that are out there,” he said. “It’s the situation the entire world is in, but we want to keep business going and offer a service people enjoy. We feel the mandates given out by the state are important, and we need to adhere to them, but we also want to stay viable as a business, and we need to open up now.”

Ten new cases of COVID-19 were reported in Brazos County on Friday, raising the county’s overall number of cases to 383.

Brazos County health officials reported three new cases of COVID-19 on Tuesday, bringing the number of overall cases to 444. Of those cases, 2…

Employee Kendal Corrington, from left, co-owner Stephanie Steele and patron Pat Quinlan share a laugh during a transaction at Blackwater Draw Brewing Company on Main Street in Bryan on Friday, May 22, 2020.

Employee Kendal Corrington pours a beer at Blackwater Draw Brewing Company on Main Street in Bryan on Friday, May 22, 2020.

Employee Kendal Corrington pours a can of wine at Blackwater Draw Brewing Company on Main Street in Bryan on Friday, May 22, 2020.