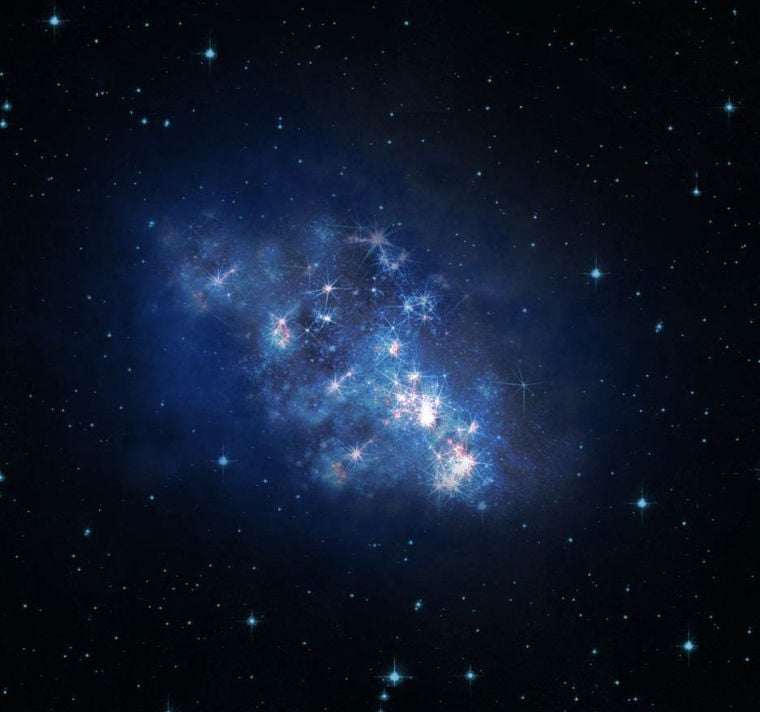 This artist's rendering depicts a new galaxy discovered by researchers from Texas A&M and the University of Texas. The galaxy was found in April using a telescope at the K.M. Keck Observatory in Hawaii. 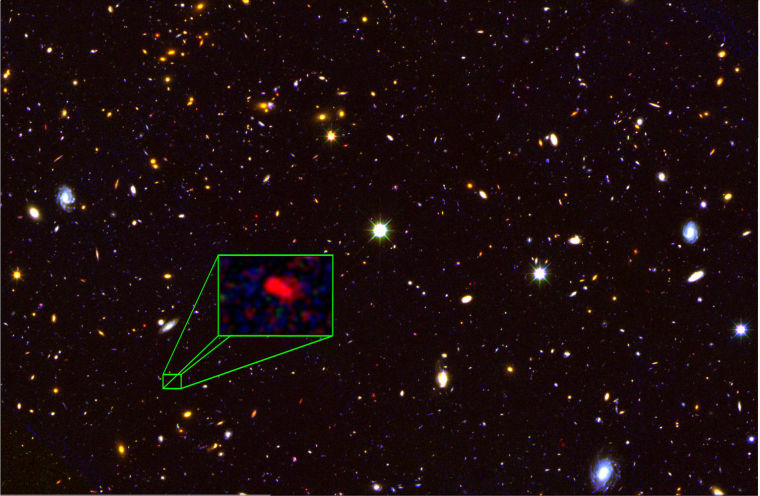 This image from a telescope shows a new galaxy that was discovered in April by researchers from Texas A&M and the University of Texas. The galaxy is the most-distant ever recorded and is estimated to be 30 billion light years away.

If you think the night sky in the Milky Way is wondrous, you should see the skyline out in galaxy z8_GND_5296.

"If you lived there, the sky would be aglow," said Casey Papovich, associate professor of physics and astronomy at Texas A&M.

That glow would be the formation of around 300 sun-like stars per year in this 13.8-billion-year-old galaxy.

Papovich is part of a record-breaking team that has measured the most distant galaxy in the known universe. An article published today in the Nature journal unveils the data and tests used to validate the discovery made by Steven Finkelstein, lead author; Vithal Tilvi, co-author; and UT grad student Mimi Song.

The trio spent two days in the W.M. Keck Observatory atop a dormant volcano in Hawaii. On April 16, Finkelstein noticed some readings that indicated a possible galaxy within the telescope's field of vision. He said that, after reducing the data on the spectrometer, the "redshift 7.51 galaxy" came into view.

"It's definitely something I've always dreamed of," said the UT assistant professor.

Tilvi, a postdoctoral research associate at Texas A&M, said he and the others were excited about the discovery, but conflicted about the rest of the study. Out of 43 galaxies, z8_GND_5296 was the only one that showed up on the spectrometer, which measures the distance and composition of a galactic system.

Why this galaxy? Why now?

To explain it, you have to go back to eighth-grade science.

Distance in space is measured in light years, the number of years it takes for light to travel from a galaxy or star to earth. This new galaxy is an estimated 30 billion light years away. That means the light from those newly forming stars and expanding gases travels approximately 5,580,000,000,000,000 miles to reach a telescopic mirror on "this tiny blue spot in the universe," said Tilvi.

Because of the distance traveled, the galaxy is only being seen at 5 percent of its actual age, which is about 700 million years old.

"You can look back in time," Tilvi said. "That only happens in astronomy."

But why look at the past? Why not see it the way it is now?

Because that is counter-intuitive to the team's two main goals.

The first goal is to find the first galaxy formed after the Big Bang. The second is to pinpoint the development of galaxies, much like our Milky Way, after the Big Bang. For that, the team needs a bigger telescope, which will be available in 2020 when the Giant Magellan Telescope is completed in Chile's Atacama Desert.

That's why only one galaxy showed up on the spectrometer.

Papovich said the red hue comes from the infrared light that is being picked up by a mirror that's about 30-feet wide. That mirror separates the light into the visible spectrum, like a rainbow. Those colors can be focused, while the others fade.

The red hue also indicates speed. Papovich said the galaxy is moving at 97 percent of the speed of light.

Weather and the earth's atmosphere are a hindrance to discoveries, Tilvi said. The glow created on the outer edge of the atmosphere limits the sensitivity of the infrared light. For clearer pictures of the universe, researchers have to reach beyond the atmosphere to the Hubble Space Telescope.

Tilvi said it took about two years to use the telescope to capture images of hundreds of thousands of galaxies. Those images were narrowed down to the 43 galaxies chosen for the Keck Observatory study.

The other galaxies weren't visible because the features used to locate them were absent, Tilvi said. One theory is that there is a fog in the galaxies that is blocking the light. As this fog becomes ionized hydrogen, a glow will start to emit; this is a key phase in the expansion of a galaxy. This also is the focus of the study of how galaxies are formed.

By comparison, the Milky Way has a couple of sun-like stars created each year. The 300 in the new galaxy are indicators of a creation somewhere around 700 million years after the Big Bang, said Papovich.

Asantha Cooray, an astronomy researcher at the University of California-Irvine, said the findings by the UT-A&M team are part of a growing number of discoveries that are debunking theoretical notions about the evolution of a galaxy.

"You would think we would understand the universe after all the observations and data we have recovered," Cooray said. "It's exciting to discover exactly what's going on in the early formation of the universe."

Hero or criminal? Who is Julian Assange and what does he stand for

Woman charged with driving while intoxicated for fourth time

A 40-year-old Brenham woman was in the Brazos County Jail on Wednesday after being accused of driving while intoxicated for the fourth time.

A College Station woman is facing a felony charge after being accused of pointing a gun at a woman and her grandchild.

A Bryan man was in the Brazos County Jail on Friday after being charged with driving while intoxicated for at least the fifth time, according …

A Bryan police officer has resigned after being charged with driving while intoxicated, officials said Thursday.

There are a number of ways Texas A&M fans could’ve celebrated the Aggies’ upset win over top-ranked Alabama on Oct. 9, such as buying drin…

A Texas A&M associate professor of large animal surgery was recently indicted on a cruelty to livestock charge.

A new form of entertainment is nearing completion in Bryan.

This artist's rendering depicts a new galaxy discovered by researchers from Texas A&M and the University of Texas. The galaxy was found in April using a telescope at the K.M. Keck Observatory in Hawaii.

This image from a telescope shows a new galaxy that was discovered in April by researchers from Texas A&M and the University of Texas. The galaxy is the most-distant ever recorded and is estimated to be 30 billion light years away.