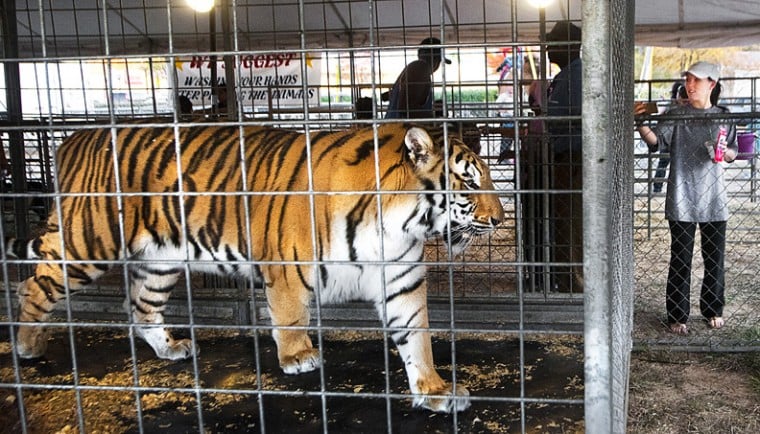 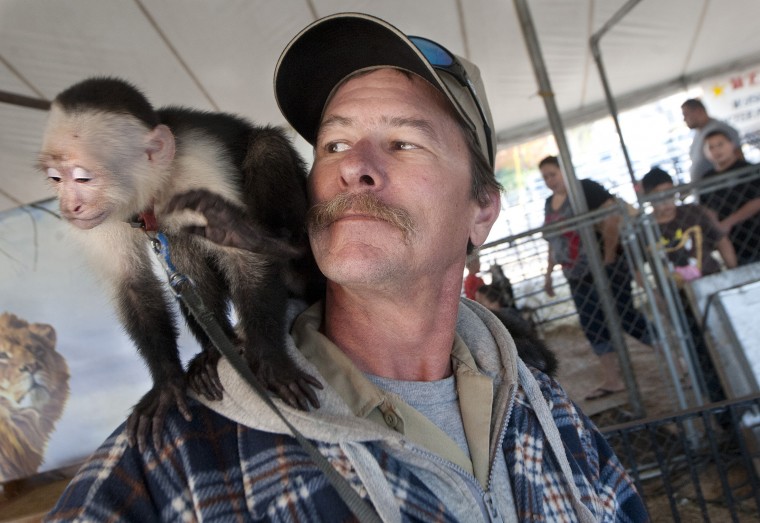 It's a zoo in Bryan this week.

Jungle Safari, a free exotic animal exhibit, set up in the 3700 block of Texas Avenue on Wednesday and will stay until Sunday at 5 p.m.

Mathilda, a four-year-old kangaroo, shoved her nose through a wire square, giving passersby a curious sniff. Empress the three-year-old Bengal tiger -- all 425 pounds of her -- slept soundly in her cage. A tiny but busy Zeus, a 9-week-old Bengal tiger cub, circled behind a fence, purring and nuzzling against the warm hands of caretakers who reached in to pet his fuzzy head.

The owner and manager of Jungle Safari, Robert Engesser, said he's glad to be in Bryan for the first time.

"This enables us to share these guys with the public," Engesser said, gesturing toward the monkeys, lemurs, goats, ponies, and the camel on display.

Engesser said the traveling zoo provides a chance for people in areas that don't have permanent exhibits to see, learn and interact with the animals.

Engesser has been showing his variety of animals across the United States for 31 years, he said. He and his crew of handlers and caretakers are on the road for nine and a half months out of the year. The other two and a half months are spent on his land in Chiefland, Fla.

Admission to the exhibit -- equipped with eight goats, one cow, two llamas, one camel, three ponies, one spotted mule, two monkeys, two lemurs, and two tigers -- is free. There is a cost, however, to ride the camel or ponies, feed the animals or take pictures with them. There is also a white tiger and black leopard on display for a $1 charge.

Engesser said the free admission is "doing it the old-fashioned way." He said the profits made through pictures, feeding and rides pays all of the employees and allows them to keep the exhibit on the move.

Dealing with large exotic animals safely, Engesser said, is a matter of their weight.

"You have to know what you are doing," he said. "Size dictates how they should be handled. We want to protect the public from the animal and the animal from the public. These are still wild animals."

The full-grown Bengal tiger was raised in captivity, Engesser said, and has grown up "socialized."

"Anytime an animal is on display and confined, there is not a stress factor," Engesser said. "Inevitably you will have the extreme view. There are a number of ways to be raised healthily in captivity."

Engesser said his grandparents and parents were operating the traveling zoo before him.

Growing up, he hated it, he said. So he decided to be a mechanic instead.

"I wanted to get away from it so bad," Engesser laughed. "Then I found out that's work, too. I figured I might as well come back to what I love if I was gonna have to work anyway."

In order to operate such a business, Jungle Safari must have an exhibitor license through the U.S. Department of Agriculture. Engesser also had to acquire a special event permit from the city of Bryan.

Dave Sacks, spokeswoman for the USDA, said the goal of licenses is to enforce the Animal Wellness Act.

"The act is a federal set of care standards that must be met for facilities with certain types of animals," Sacks said. "We put them on unannounced inspections to see how they are treating their animals."

Sacks said that anything not in compliance with general USDA guidelines is cited, and the operator is given a timeframe in which to correct the problem.

"It can be anything from a hole in the hippo's cage, to a giraffe with a broken leg," Sacks said. "It can really run the gamut."

Regulations set by the organization are not specific, Sacks said. For instance, cage size standards are not determined for each animal, but should be large enough for the animal to move about freely.

"The bottom line is ensuring the welfare of these animals," Sacks said. "The responsibility falls to them. These folks do what they need to do, and we do what we need to do to ensure the animals are healthy."

Sacks could not detail the nature of the penalties because the cases are outdated.

People for the Ethical Treatment of Animals has several citations to Jungle Safari listed on their website, but Sacks did not confirm that they are consistent with USDA records.

According to PETA, the March 8, 1994 infraction was for failure to maintain enclosures and failure to store bedding to prevent contamination.

Engesser said he thinks Jungle Safari has a "decent record" in all its 31 years.

He said there was an infraction in the past for improper food care for the animals, but the organization was in the process of building a new food housing system at the time.

"[The USDA] wants to oversee the animals' health and welfare, Engesser said. "I think we've done a good job of that."

When the animals aren't on the road, he said, they have open spaces to roam back home in Florida.

He said he has a close relationship with two vets he consults with often to ensure the health of the animals.

A pair of sisters, 11-year-old Caitlyn and 8-year-old Ashlyn Seal, lit up as they stopped to gaze at each animal.

"It's pretty cool," Caitlyn said. "When we went to feed the goats we put the money in [the machine] and they all came right to it!"

Ashlyn said her favorite part was riding the 2,000 pound camel.

Their mom, Julie Seal, said she wanted to bring her daughters after hearing about the exhibit on the radio. She was especially excited about them getting to ride the camel.

"I remember riding one at a circus when I was little, so I wanted them to do it," Julie said. "I do feel bad that the animals are kind of in cages but they're so cute. It's hard not to want to look at them."

Engesser said there will be a public feeding Saturday at 7:30 p.m., where anyone is welcome to watch the exotic animals be fed. There will also be a lecture about the animals, he said.

Watch Now: Biden wants to raise taxes on the wealthy

Watch Now: How much will space travel cost?

Watch Now: How much will space travel cost?

The Jungle Safari traveling animal exhibit stopped in Bryan on Friday and while remain in town until Sunday. The zoo is free, although rides a…