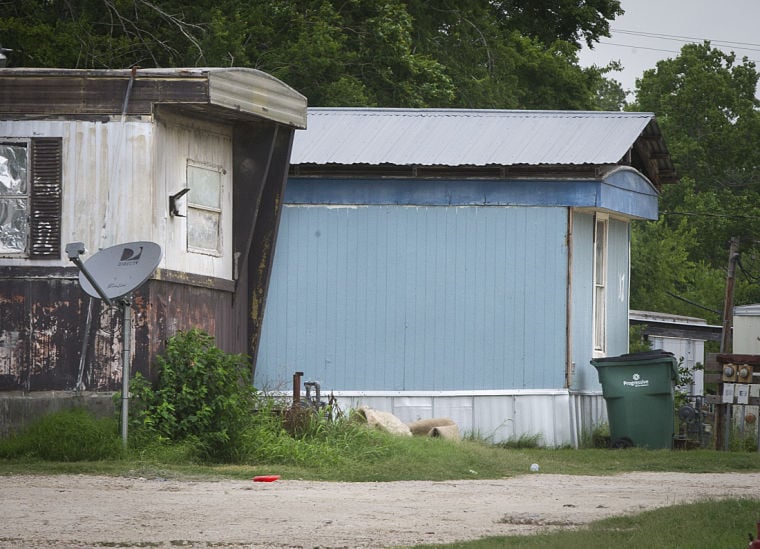 Madisonville police have arrested several suspects in the alleged rape of a 16-year-old girl at a mobile home (blue) in Madisonville. 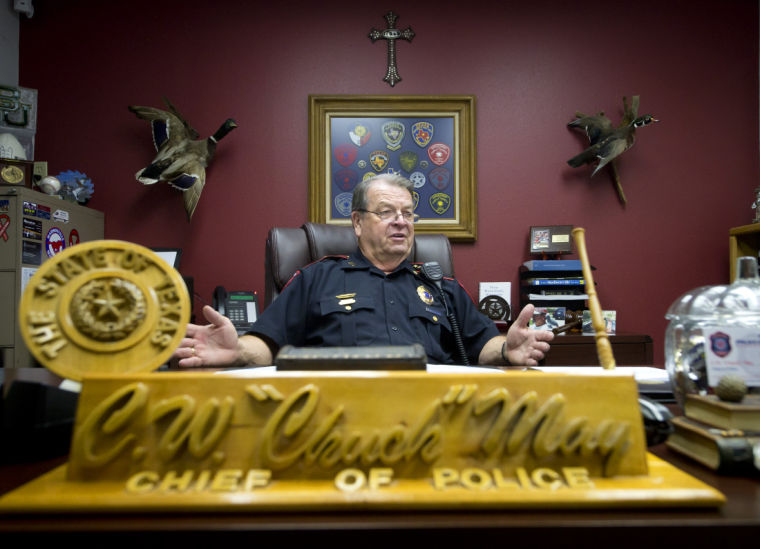 Madisonville Police Chief C.W. "Chuck" May speaks in his office Wednesday about the arrest of individuals in an alleged case of gang rape in the town.

MADISONVILLE -- About 30 single-wide trailers are clustered on a block of East Lance Street just around the corner from the town's only feed store. Sitting cross-legged and sipping on coffee, one of the five white-haired men in the Madisonville Feed Center offered up a cup of joe, but not a word about the spotlight 11 residents have thrust upon this city of 4,428.

According to Madisonville police, a 16-year-old girl in early March was introduced to methamphetamine and transported to a trailer home on East Lance Street, where she was sexually assaulted for several hours by as many as 10 confirmed males and one female.

Ten of the 11 Madisonville residents, ranging in age between 19 and 35, are in custody for charges of trafficking and sexual assault, with bail set at $100,000 each.

Madisonville Police Chief C.W. "Chuck" May said the department is "well-tuned" to sexual assault incidents. In his year-and-a-half as chief, the department has solved six such cases.

"This case was so voluminous and so detailed that we had to verify every bit of information that we got to ensure that the witness was credible," May said. "It's very time consuming, but I'd rather invest the time and have it done right than have a quick case and miss a lot of evidence and a lot of key things."

May chose not to release facts surrounding the evidence in the case, but said the victim was able to describe the interior of the trailer where she was raped.

Urged by the police department to turn themselves in, Sondress Lotts, 35, and Earl James Tyler, 33 came forward Saturday. Dedrick Whaley, 20, also turned himself in.

Hannable Craig, 24, is still wanted on the felony charges.

The case has garnered state and some national attention, attracting media from Houston and the Associated Press to May's office.

Several residents outside the blocks surrounding the trailer park were unaware of the incident five days after the news broke. Others, who live just feet away from where the sex crime occurred, shared what they knew about that night in early March, but asked not to be named.

Even more trailer park residents, playing outside with children, sitting in folding chairs and hanging laundry, chose to avoid the topic, and eye contact.

Social media sites and town gossip said the teen was promiscuous and may have been using drugs.

Family and friends of the suspects created a Facebook page, "Justice for Innocent Suspects in Madisonville, TX," claiming the victim told the suspects she was 18 and that her mother had dropped her off to meet the group on the night of the incident. The page had received almost 500 "likes" from fans before being pulled down.

One adult woman posted on the page a photo of a girl she believed was the victim showing off a tattoo near her hip.

A relative of one suspect said the incident has been magnified because of race.

The page was no longer active Wednesday. May said the police department was not responsible for removing it, adding he would like to thank whoever had.

"Social media is a nightmare," May said. "If they're 16 years old and they had sex with an adult, the law is violated. It don't make a darn what she was, if she was a drug addict, if she consented or anything else. They violated the law by having sex with a juvenile. No matter what kind of sex it was."

May said the teen has been receiving counseling from Scotty's House, which provides services to abused children. She told authorities that she believed her assailants were going to kill her when she was assaulted with a deadly weapon. Police did not release details regarding the weapon.

Several requests to obtain arrest reports from the Madison County District Attorney's Office and the office of the Justice of the Peace were not returned Wednesday or Thursday. The Eagle filed an open records request for the probable cause statements in the case, but May said he couldn't release them because it remains under investigation.

May said the incident is a result of the "drug culture" in the small town. He said recent drug busts have involved mostly synthetic marijuana and methamphetamine.

A "fair share" of calls, he said, including disturbance calls to the department, occur in the trailer park on East Lance Street.

"We keep them stirred over there because we know what they are doing," May said.

A retired Houston police officer, Secret Service agent and officer with the Madisonville school district, May said he advises high school students to continue with their education and move outside the city.

"I tell every one of them, finish high school, get the hell out of Madisonville ... Come back to visit family and friends, but find yourself a job somewhere else because we have no other jobs besides mom-and-pop operations, fast food and Wal-Mart, the school district and Buc-ee's," he said. "If they come back here and don't have a job, they end up in the [drug] culture, so why come back? It's a good place to come visit, there's just not a lot of opportunity for career advancement here."

According to District Attorney Brian Risinger, the case is likely to go before a grand jury in July.

Watch Now: Phone apps that help you during natural disasters

Watch Now: Phone apps that help you during natural disasters

John Hinckley to be released from oversight

John Hinckley to be released from oversight

Suspect in Madisonville sexual assault, trafficking turns himself in

One of five people wanted in connection with what police say was the gang rape of a Madisonville teen has turned himself in.

Two more suspects in Madisonville rape turn themselves in

Nearly a dozen charged with sexual assault, trafficking in Madisonville

Madisonville police have arrested several suspects in the alleged rape of a 16-year-old girl at a mobile home (blue) in Madisonville.

Madisonville Police Chief C.W. "Chuck" May speaks in his office Wednesday about the arrest of individuals in an alleged case of gang rape in the town.