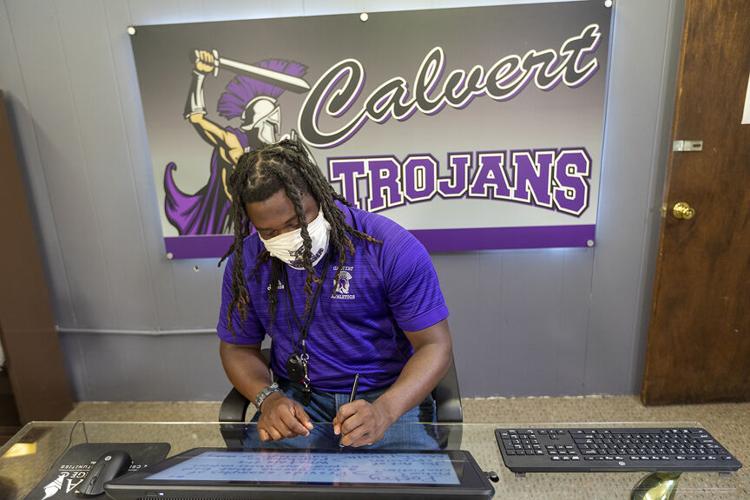 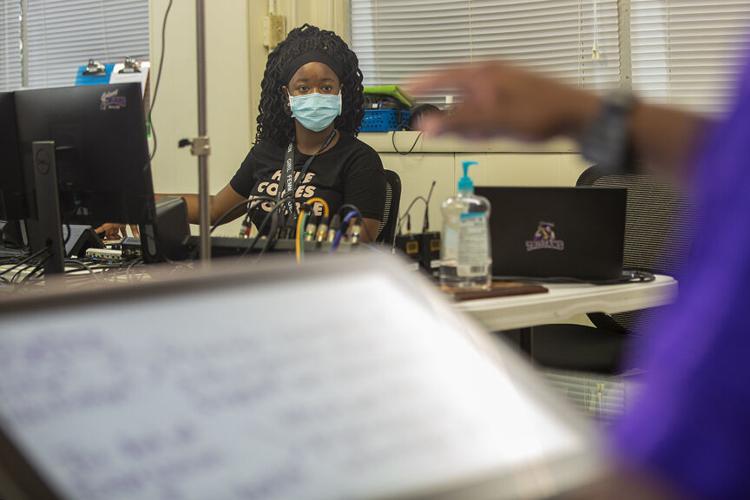 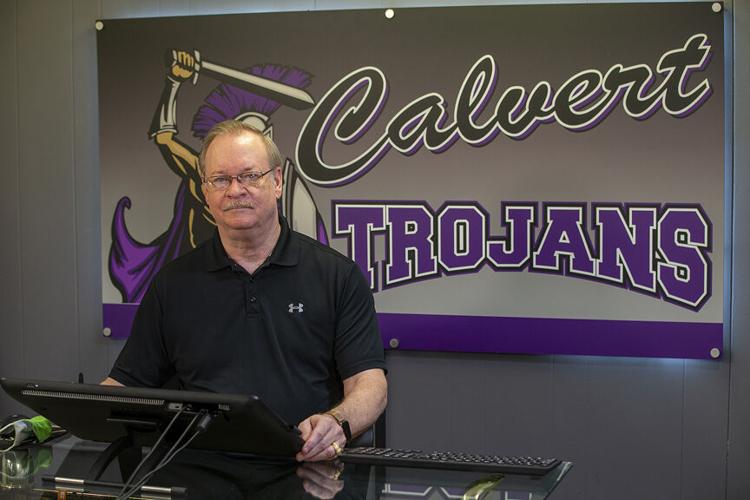 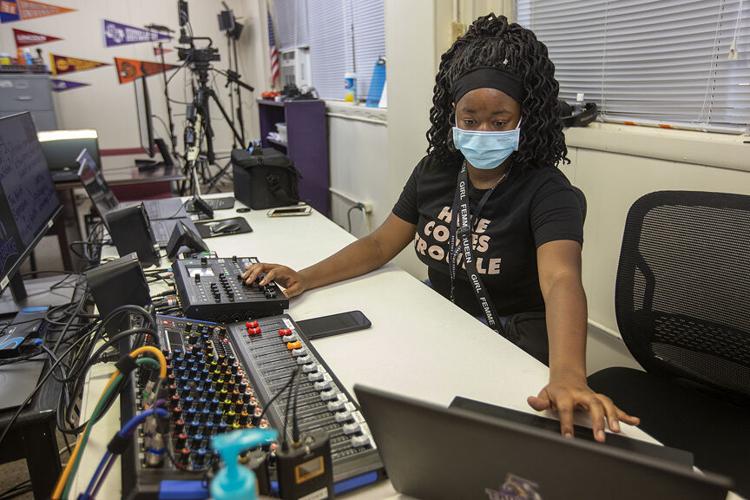 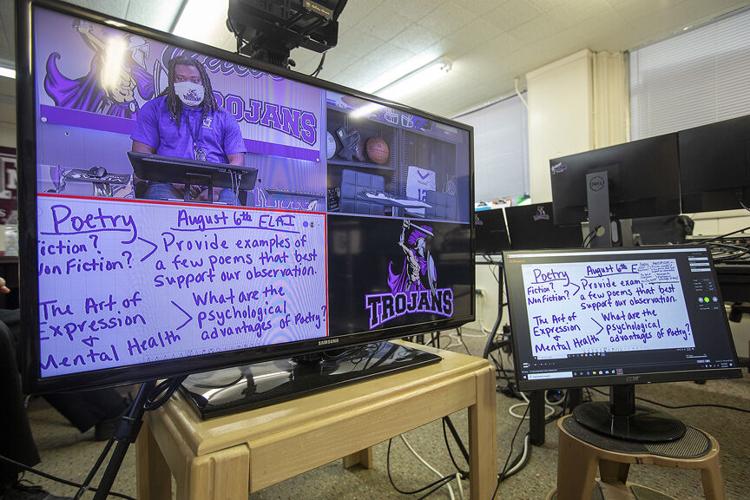 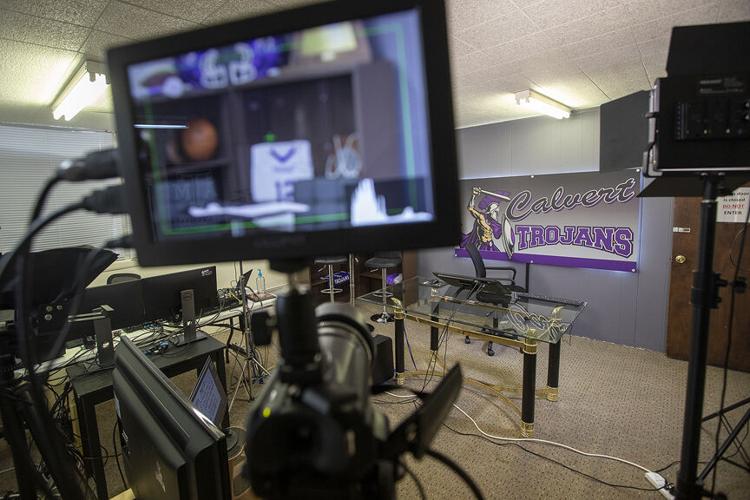 Online learning was not an option for Calvert ISD when the COVID-19 pandemic caused the district to go remote in the spring.

Instead, paper packets replaced in-person lessons for the school’s 140 students.

Fiber cable runs through the heart of town along Texas 6, but 85% of Calvert students don’t have the necessary technology and internet access, according to Technology Director Dan Arnold. Attempts to increase internet access have been unsuccessful, he said, since internet providers deem the area unprofitable.

“It’s not fair,” Arnold said. “We have a school here and the school is not going anywhere. It’s been here since 1870. The people in this town should be just as entitled to high-speed internet as all the other little towns along the way.”

With assistance from a regional education service center, the school has fiber from Bryan running to its campus, improving the district’s previous problems of sometimes losing connection for days.

But for students, the problem remains an issue at home. Arnold said the few who have internet access usually work with DSL — the slowest of high-speed internet options.

With a new school year just around the corner, Calvert administrators are working to change what remote learning will look like this year. With the help of grant funds, each student will receive a laptop, and 50 hotspot devices will be distributed. Classrooms will be equipped with web cameras so in-person instruction can be broadcast to students at home.

Most elementary and middle school students have indicated that they want to attend in-person courses this year, while about half of Calvert high schoolers are opting for remote learning. Arnold said the new technology should be able to meet everyone’s needs.

While the equipment likely won’t be available at the start of the year, leaving teachers to put assignments on paper for those learning at home, Arnold is confident the devices will be in student hands before the end of the first six weeks.

As the school transitions to using digital platforms for remote learners, teachers will be able to use the equipment in the school’s TV studio — which was initially designed for broadcast courses — to create instructional videos for students.

Hearne ISD administrators also are tackling lack of connectivity in specific areas. Hearne Junior High School Principal Lucinda McDaniel said that in the spring, the 850-student district partnered with the city and Brazos WiFi company to set up free Wi-Fi in three areas of town known for having many students without internet access. The school’s parking lots also offer Wi-Fi.

The school purchased 100 hotspot devices last school year, and in the fall will add 350 more. Hundreds of Google Chromebooks — laptops with some limited capabilities — were purchased in the spring. More were added this summer as the district plans to equip each student with a device when the new school year kicks off, with those in second grade and under using iPads while others use Chromebooks.

The equipment is critical, as the district plans to begin the year online for the first four weeks before gradually transitioning back to in-person courses.

McDaniel said the school is poised for online and in-person learning, even if quick pivots are necessary during the year.

“We’ve made so much progress with our district and our students are so amazing,” she said. “We don’t want them to fall backwards in their learning. We don’t want a gap widening. We want to keep on top of it.”

Even so, Hearne ISD parent Elaina Luksovsky opted to home school her children this year, largely because of scheduling conflicts with her job, but also due to the family’s unreliable internet. It was manageable in the spring, but as the state released stricter guidelines for attendance even for remote learners, Luksovsky said she worried about truancy.

Luksovsky and her husband have three children, including a daughter in fifth grade and a son in first. She started teaching them this summer to make sure they stayed on track throughout the year.

To get around their internet troubles, Luksovsky downloaded PDF versions of lessons for her kids so that she could print them out on days they cannot get online. She said she looks up to teachers from Hearne, whose resourcefulness in the spring helped her feel like she could teach her kids during this hectic season of her family’s life.

The school is moving toward ensuring that each student has a Chromebook or iPad, and other aspects of the school’s tech gear and teaching strategies are also getting a facelift. Classrooms will see the addition of interactive televisions, and teachers are being asked to make more video content available.

In the spring, Groholski said most of the district’s 510 students were able to do school work online, with a handful choosing paper packets, sometimes out of preference.

Some students last school year had challenges with obtaining reliable internet in certain parts of the district’s boundaries — it’s the “nature of being in a rural area,” he said. But their needs were met with paper in the spring, and those opting for remote learning this year don’t seem like they will have an issue, he said. The district is handling problems individually as they arise, he added, and officials are confident in the ability to facilitate an effective curriculum for all.

Bandwidth availability may be a hurdle for the Bremond area, Groholski said, but officials have been assured that there will be improvements, including a new Verizon tower in the area. Verizon has not given many details to the district, he said, other than saying that the tower should be available around Bremond in the near future.

Similar to other Robertson County districts, Mumford ISD is close to offering a Chromebook to each of its roughly 640 students, according to Superintendent Allen Reese. Twenty-two of the district’s students who have opted for at-home learning have limited or no internet available in their home. To fill the gap, Reese said the school is waiting to receive 50 hotspot devices.

“It’s a struggle out here,” he said in a recent interview. “I talked to a mama this morning, and they have internet at the house, but it is through satellite, and depending on which way the wind is blowing, they lose connection considerably.”

As schools reopen, Arnold, the Calvert school district’s technology director, said he’s excited for opportunities open to students now that they will have more equipment at their fingertips.

Bremond’s Groholski stressed the importance of district officials learning how to use the new technology efficiently so that it can be an effective tool.

“One of our legitimate concerns,” he said, “is making sure that we’re able to make the learning process as seamless and as meaningful as we possibly can for our students, that they’re getting a quality education and that we’re leaving no stone unturned to make that happen.”

Arnold said he has hope a COVID-19 vaccine could bring relief.

“I just hope in six months from now,” he said, “this is gonna be a bad memory.”

Pandemic highlights broadband internet gap for many in rural counties

The COVID-19 pandemic has thrown into stark relief the rural-urban digital divide, especially as schools prepare to reopen with a mixture of in-person and online education.

Without traditional wireless or fiber connections, residents are left with satellite as one of their only options.

Broadband internet service is notoriously spotty in Marlin and the rest of Falls County, a rural area in Central Texas of about 17,297 people. To help students get connected for virtual learning, Marlin ISD used TEA funding to make internet accessible.