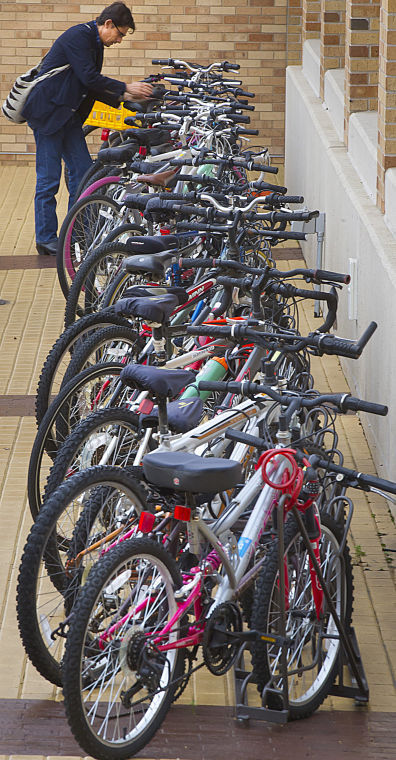 A long row of bicycles stands near the Memorial Student Center on the Texas A&M campus Friday, Jan. 10, 2014. The university may soon adopt new rules regarding bikes on campus. 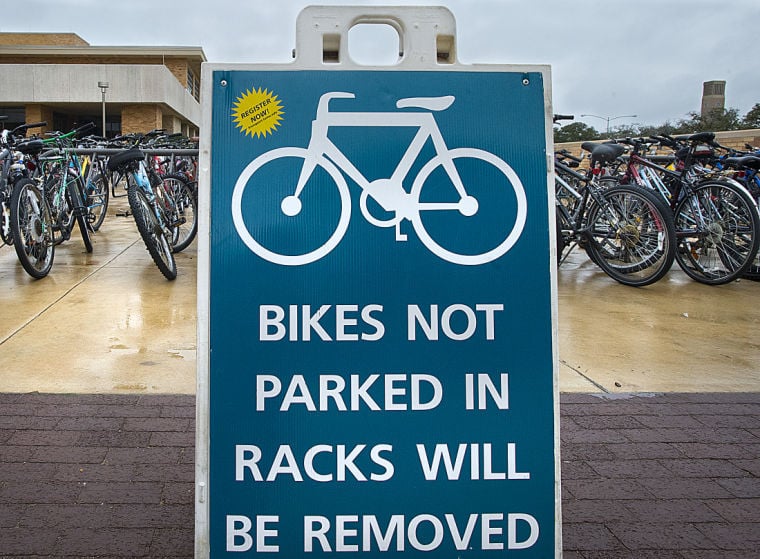 Officials at Texas A&M may soon adopt new rules regarding bikes on campus.

Texas A&M University is planning for an influx of cyclists on campus. The exploding growth at Northgate and the planned West Campus housing project will increase the amount of bike traffic, and university administrators are looking for outside help to handle it.

The university has issued a 29-page request for proposal for a contractor to create a bicycle district plan, which will essentially be a planning guide for everything bike-related at A&M. The scope of the work laid out in the RFP, for which bids are due in February, includes surveying students, faculty and staff, examining existing traffic on campus, surveying bike parking, drafting a list of improvement projects and, perhaps most importantly, prioritizing those projects.

Texas A&M already has the largest student body in the state and the fourth largest in the nation. The main campus encompasses 5,500 acres, almost all of which is accessible to vehicular traffic and some of which already has bike lanes.

Texas A&M officials expect the bike influx to hit in 2015, when the 4,000-plus-bed west campus housing project comes online and a lot of the new housing and retail around Northgate is built. Top A&M administrators plan to require freshmen to live on campus in the upcoming years and all of those factors combine for an unprecedented amount of bicycle traffic.

Aggie administrators are already seeing a growing number of cyclists.

"We have this ultimate goal of doing everything that matches up with our plans to have a bike-friendly campus, a framework of things that need to be done, but we've also seen more bikes on campus this year," said Peter Lange, executive director for transportation services. "We've had areas where we've added racks and have had plenty of bike parking and then all of a sudden in the fall, bam, it exploded and there's no room. We think that's new cyclists and we think it's because of some of the new development in the area that's within cycling distance. Northgate is an ideal cycling distance."

The Texas A&M transportation department created a designated alternative transportation administration position about three years ago. The department oversees the creation of new bike racks, registration, bike repair stations and bike leasing, sharing and borrowing. The district plan will supplement those efforts, and Lange said a consultant could help bring a national perspective.

One of the goals A&M administrators have is to make a plan for uniform bike lane lengths and signage.

The precise causes of the bike growth are hard to pin down, and that's something A&M officials hope the consultant helps with.

"I think there's a bit of a chicken or the egg thing in there," Lange said. "If you have a decent infrastructure and safe riding with nice bike lanes and good markings, drivers are aware of it, there's good racks or storage facilities, then you start to build some momentum and people look at it as a viable alternative."

Debbie Hoffmann, associate director of transportation services, said the contract should be awarded in February and that the assessment could be completed in time for changes before the fall 2014 semester. She said the recommendations should include immediate changes to implement as well as long-term planning.

"Summer is our best opportunity because the population on campus diminishes then," she said. "It's an opportunity to install bike corrals if that's the answer or some other kind of bike storage."

Hoffmann said the university also plans connectivity between its bike infrastructure and the cities of Bryan and College Station.

The district plan was well received by Aggie cyclists who said the on-campus infrastructure is already good.

"It's pretty bike-friendly already," said A&M sophomore Grant Koontz, a member of Texas A&M Cycling. "It's obvious that they've made an effort to try to make it bike-friendly with the lanes and the work stations."

Senior lecturer Jean Marie Linhart, a member of Brazos Valley Cyclists, commutes on her bike about four times a week. She said she was excited that A&M was being proactive with its bike infrastructure planning.

She hopes future construction will help protect the vehicles from hot, cold or rainy weather.

"For example, if they were going to put bike racks in garages to protect bikes from the elements, that would make a difference or simply put some kind of shade cover over them," Linhart said.

Linhart wasn't worried about the influx of cyclists A&M is prepping for.

"As a cyclist, I think it's always good when we get more cyclists in because that actually tends to make the culture more accepting about cycling. From a parking perspective, I hope they have some plans, because when I go to activities at the Memorial Student Center, I always have a hard time parking my bike."

Koontz, who commutes to A&M and work by cycling, said there was already a little bit of bike crowding on campus, but that he, too, was excited about more bikes on campus.

"It sounds good to me -- the more the merrier in my opinion," Koontz said. "From what I've seen, it's pretty good already and if they can make it better, then that's great."

Several school districts around the Brazos Valley have canceled classes for Monday because of the weather.

She is charged with driving while intoxicated, third or more, which could be prosecuted as a third-degree felony.

A Bryan man accused of assaulting a woman multiple times and a College Station man who was arrested in September after allegedly breaking into a home and assaulting another person were among 19 people indicted.

Blue Cross Blue Shield of Texas customers can once again receive in-network rates at St. Joseph hospitals after three weeks of being unable to…

He is charged with aggravated assault with a deadly weapon — family violence, a first-degree felony.

All providers that received the vaccine were directed on Tuesday by the Texas Department of State Health Services commissioner Dr. John Hellerstedt to “immediately vaccinate” all eligible Texans.

A winter storm blew through the Brazos Valley on Sunday, bringing several inches of snow to much of the region.

Sunday brought the Brazos Valley its first snow day since 2017, and enough icy precipitation to put it in the top five all-time snow events for the area.

A long row of bicycles stands near the Memorial Student Center on the Texas A&M campus Friday, Jan. 10, 2014. The university may soon adopt new rules regarding bikes on campus.

Officials at Texas A&M may soon adopt new rules regarding bikes on campus.