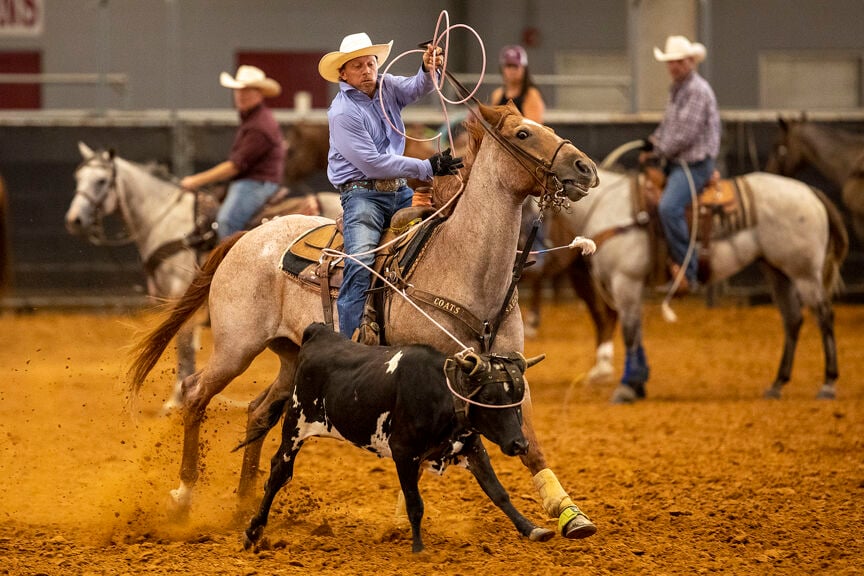 Seth Callahan competes with Krese Harris (not pictured) in over 40 team roping at the All-Aggie Rodeo in the Brazos County Expo in Bryan on Saturday, Sept. 12, 2020. 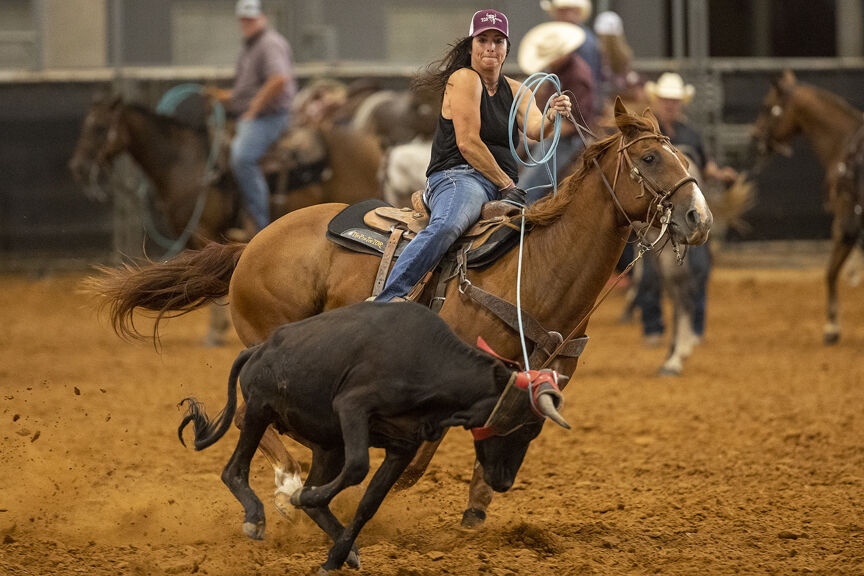 Mary Frey competes with Cody Frey, not pictured, in over 40 team roping at the All-Aggie Rodeo in the Brazos County Expo in Bryan on Saturday, Sept. 12, 2020.

The number of participants may have been smaller than 2019, but the 101st All-Aggie Rodeo was in full swing Saturday, drawing more than 125 current students and Texas A&M alumni as competitors.

Texas A&M food science professor Al Wagner, who is coach of the university team and organizes the All-Aggie Rodeo, said while the roster was smaller this year, the number of participants was still a healthy turnout for the event.

He noted that he had been wary of hosting the 101st rodeo due to the COVID-19 pandemic, but he was pleased with how the Brazos Expo has handled events in light of Centers for Disease Control recommended restrictions. On Saturday, contestants and their family members dotted the Expo bleachers in Bryan, shuffling between cheering on their peers and getting on their own horses to rope and race.

For an entry fee, current and former students and their immediate family members can participate in events such as calf roping, barrel racing, goat tying and steer wrestling. Proceeds are used toward prize money for rodeo winners, and partially toward scholarships for Texas A&M rodeo team members. Wagner said Aggies with varying levels of skill and from all across the state traveled to be at the Expo for the event.

Ravyn Brown, a Blinn College alumna and Bryan native, traveled from Corpus Christi with her Aggie graduate husband, Shane, to compete on their horses Chief and Hotwire. The Browns have each competing in rodeo since they were children, and they’ve been participating in the All-Aggie Rodeo at least since 2005, when they married. As of early Saturday afternoon, Brown had already placed high against more than 35 opponents in barrel racing.

“You get to meet back up with old college friends and catch up,” Brown said. “It is competitive. You have college rope girls doing it, and then those of us who are older are trying to compete with the younger ones.”

The Browns typically participate in numerous professional rodeo events together throughout the year. But due to the pandemic, the All-Aggie Rodeo has been just one of a few special instances to saddle up. Brown said she was happy to have a reason to be together with her parents and friends.

“We have not seen them in awhile, so it’s been nice,” she said.

Seth Callihan, Texas A&M class of ’03, came to Bryan from Willis with his family, and by midday he had already placed second in team roping, up against several dozen teams. While Callihan, too, competes professionally, the All-Aggie event is special.

“It’s more laid back,” he said. “And it’s a lot more fun when you come to Aggieland. We love every chance we have to come back here.”

Callihan was a member of the university’s rodeo team while a student in the early 2000s and was coached by Wagner. This weekend reminded him of some of those lessons he first learned so many years ago as a young rider.

“Coaching me in rodeo, Dr. Wagner taught me things just about life,” Callihan said. “You keep going and rodeo every chance you get. And if you’re with family and friends, whether you [perform] good or bad, you’ll live to rodeo another day.”

Payton is accused of stopping the Hummer on the child’s ankle, and reversing the vehicle and driving away when police attempted to approach her.

The report says that the 53,150 degree- or certificate-seeking undergraduates, not including people only taking distance classes, make up 45.8% of the city’s population.

Before Charles Lindbergh made the first solo transatlantic flight, before Pluto was discovered and before College Station was established as a city, A&M Consolidated School was educating students.

According to an article from Texas A&M Today, 6,236 A&M students were invited to participate via email after the program was announced near the start of the fall semester. The second round of random testing is underway now, the article states.

In advance of the second grading period of the school year, parents in Bryan and College Station have had the opportunity to switch whether students learn on campus or at home.

“There’s nothing that’s happened so far that we didn’t expect. We expected an uptick,” he said. “Our goal is to make sure that they are safer here than they would be at home in Dallas, Houston or any place else.”

Authorities have released the names of three people killed in an collision Friday afternoon in Grimes County.

Owners expressed above all a desire that A&M players and staff remain safe during the season and that they as operators also can limit the spread of the coronavirus, while they hope the season brings more people into local shops, restaurants and hotels.

Seth Callahan competes with Krese Harris (not pictured) in over 40 team roping at the All-Aggie Rodeo in the Brazos County Expo in Bryan on Saturday, Sept. 12, 2020.

Mary Frey competes with Cody Frey, not pictured, in over 40 team roping at the All-Aggie Rodeo in the Brazos County Expo in Bryan on Saturday, Sept. 12, 2020.