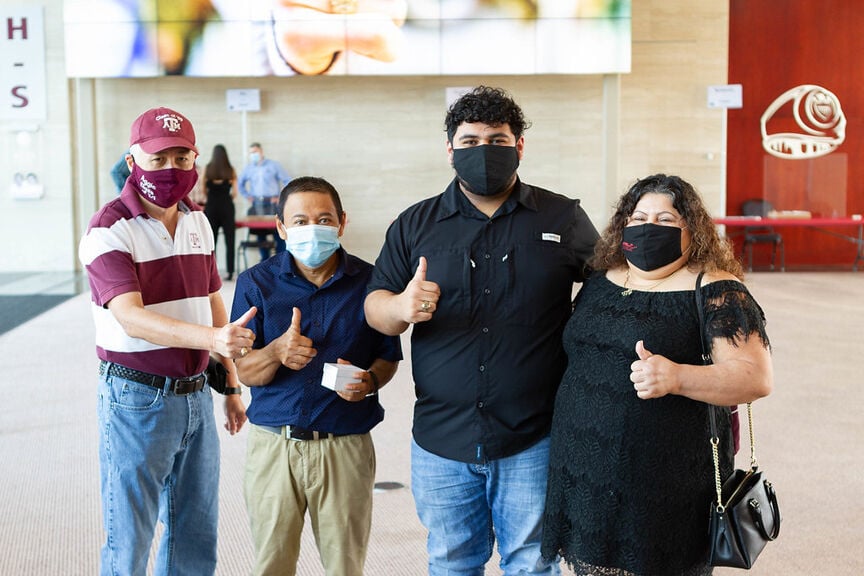 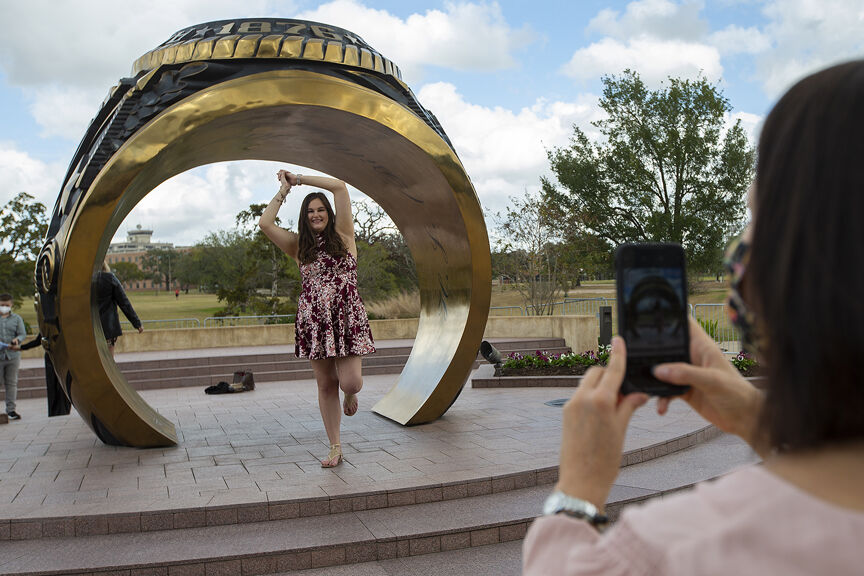 Laura Goggan takes a photo of her stepdaughter, Sarah, during Aggie Ring Day on the Texas A&M campus in College Station on Friday, Nov. 20, 2020. 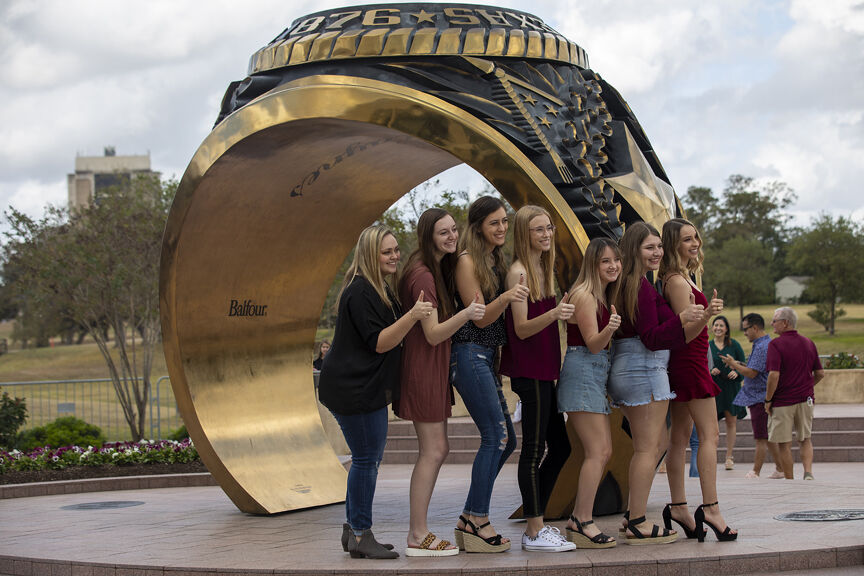 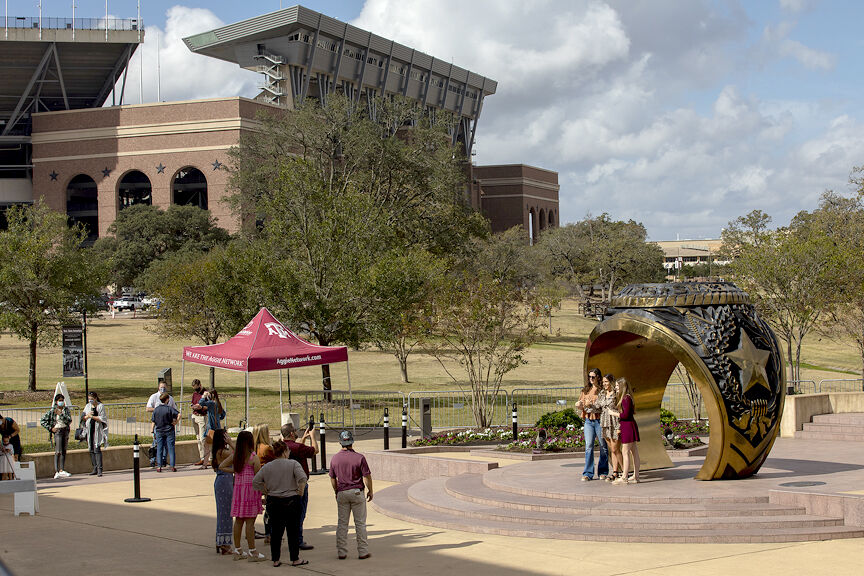 On Friday, Wong served as a Ring Day volunteer and presented C.A.M.P. participant Jeffrey Sandoval with his Aggie Ring. Sandoval is the second student from the organization to earn a ring from A&M.

The two met when Sandoval first got involved with C.A.M.P. while he was in third grade.

Being a part of the program was intimidating at first, Sandoval said, since it introduced him to professionals he never would have met otherwise, but going to the regular meetings offered by the group helped him to become more comfortable.

“It’s a beautiful experience, because I came from places where not many people graduate from high school,” he said. “Coming here and receiving my ring is a great milestone for me, and C.A.M.P. has been there for me and helped me achieve that.”

The COVID-19 pandemic has changed the way The Association of Former Students runs Ring Day. One of the safety precautions this week included a limit of two guests in the building per student receiving their ring.

Sandoval’s two guests were his mother and father, Maria and Jose Sandoval. Maria said that Sandoval is an inspiration to his two younger siblings. She added that Sandoval has always been focused on his studies and has dreamt of attending A&M since he was in third grade.

“For us, it’s wonderful to see him accomplishing his goals,” she said in Spanish, as Sandoval translated.

Watching Sandoval grow up and earn his ring is moving, Wong explained.

C.A.M.P. co-founder Sam Williams, class of ’68, also joined in on the celebration via a video call.

Sandoval was one of more than 2,600 students to earn a ring this November. Most students picked up their ring in person. About 600 opted to receive it by mail, which is twice as many as normal, according to Kathryn Greenwade, The Association’s vice president for communications and human resources.

This year’s November ceremony, which was spread across Tuesday, Thursday and half of Friday to allow for smaller crowd sizes, was the closest to a pre-pandemic Ring Day the school has hosted in about a year. April recipients received rings by mail, and in September anyone who wanted to pick it up in person could not bring any guests. Greenwade said that the last typical Ring Day was in November 2019.

Ring Day included a mask-wearing policy, and the number of people in the Alumni Center was strictly monitored. A new batch of several recipients and guests entered every 30 minutes. Throughout the ceremony, announcements were made reminding people of safety precautions that can help avoid the spread of the virus.

After the September ceremony, Greenwade said officials noticed that even if students brought guests into the Clayton W. Williams, Jr. Alumni Center, there could still be room for social distancing. She said when they announced that people could bring two loved ones inside, the local COVID-19 case counts had been better than what they currently are, since there have recently been case spikes throughout the county. Even so, she said she thinks the event ran smoothly and was done in the safest possible manner.

In September, the hundreds of volunteers who normally assist in distributing rings were not permitted to do so. This month, about 140 of them were allowed to participate again. Greenwade said volunteers are always a group of former students or faculty and staff.

Husband and wife Robert and Dee White made a trip from Boerne to help distribute rings. Robert, class of ‘81 and a board member for The Association, presented a ring to Sydney Roe, who lives next door to the Whites. At a past ceremony, Robert also presented Sydney’s sister with her ring.

Robert said it is great to see the excitement on people’s faces as they receive their ring with their loved ones surrounding them.

“We want to encourage them to wear that ring every day,” Robert said. “It is the most recognizable ring that is out there. Anywhere in the world you go, if someone sees that ring, they know that you come from a special place and you’re a special person because of that.”

After she received her ring, Madelyn Guerra took photos outside of the Alumni Center with her parents, grandparents and two of her roommates who she has known since the first grade. Guerra said she was worried that the pandemic would mean that she couldn’t have a traditional celebration, but she said the school made the best out of the situation.

“I worked really, really hard to get to 90 hours so to be here is amazing,” she said. “Sometimes I doubted myself, so it’s a special moment.”

Tuesday was the last day of classes for Aggie students. Final exams, which are all online, start Dec. 1 and run through Dec. 9. While exams are not in person, many students are opting to take their tests in College Station rather than their hometowns.

Laura Goggan takes a photo of her stepdaughter, Sarah, during Aggie Ring Day on the Texas A&M campus in College Station on Friday, Nov. 20, 2020.