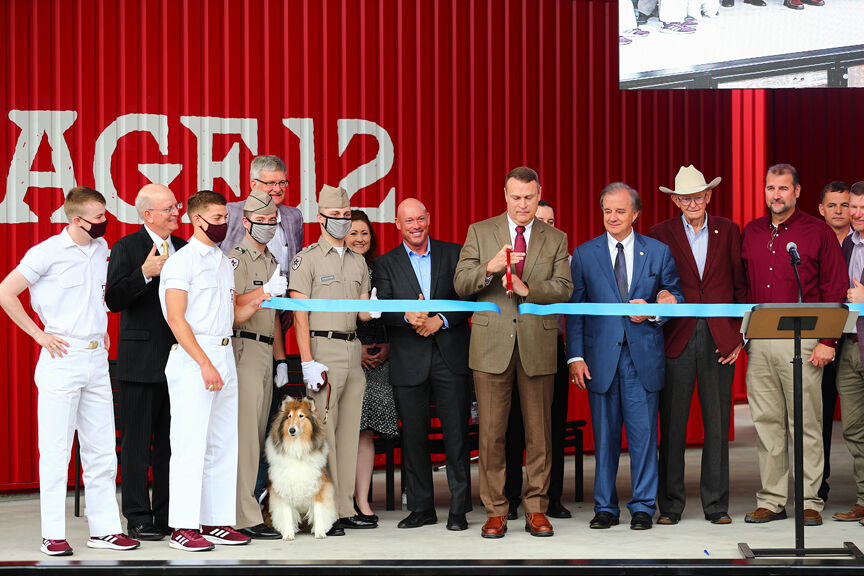 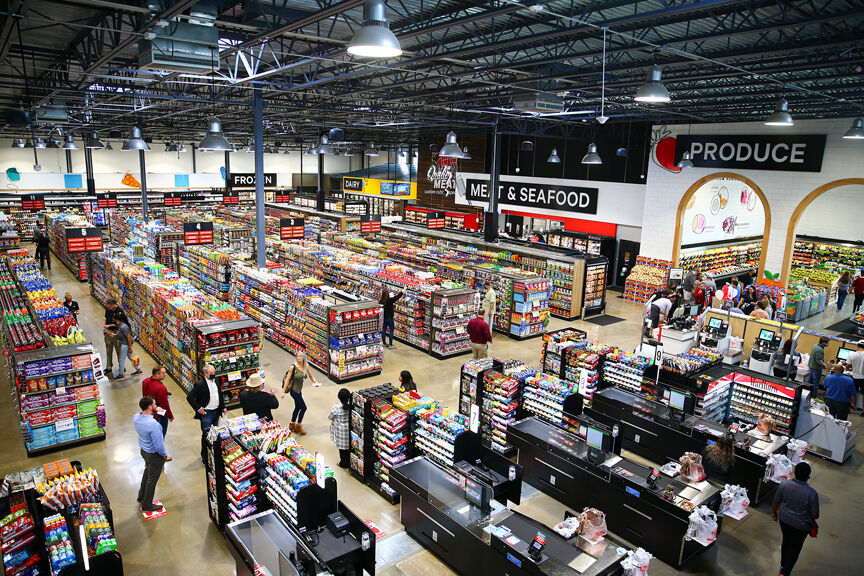 The Brookshire Brothers grand opening event on Tuesday, April 27, 2021, featured appearances from the Texas A&M University Yell Leaders, Parsons Mounted Cavalry, Reveille, the Aggie Band and the Singing Cadets. The store, located on George Bush Drive West by Park West Apartments, is across the road from Texas A&M's West Campus and will cater to students, faculty and staff.

The grand opening had a distinct Texas A&M vibe, with participants such as the Yell Leaders, the Aggie Band, the Texas A&M Singing Cadets, and  — in her last week before retirement — Reveille IX. The 40,000-square-foot store opened for business one week ago and has a second-floor balcony, space available for private events, a lounge, a full-service pharmacy and a fuel station with electric vehicle charging.

Texas A&M University System Chancellor John Sharp said the store addresses what was a gap in available food and pharmacy options on the west side of the A&M flagship campus.  He said after the ceremony that several stores bid on the chance to build in West Campus.

“When we first looked at this land, the first you find out is everything from the railroad tracks on is a food desert. We would constantly hear faculty and students talk about how much trouble it could be to get something to eat or go to the pharmacy without having to drive all over town,” Sharp said.

“Brookshire Brothers went way beyond what we imagined. This is something that all the tailgaters are going to use, and thousands of people in these apartments won’t have to go all over to get their groceries.”

The store is located at 455 George Bush Drive West in College Station, across the street from E.B. Cushing Stadium, the home of Texas A&M’s track and field teams.

John Alston, president and CEO of Brookshire Brothers, was among those who said the store was built with Texas A&M students, faculty and other stakeholders in mind.

“To sum it up, speaking to you as a former student — class of 2000 — gig ’em. This is your store,” Alston told the hundreds in attendance who crowded into the store’s outdoor event venue and cheered his closing words.

“I think this is awesome — it’s a great amenity to the community,” Harvell said. “There’s a great market for this right here at this exact location because a lot of the kids don’t have transportation. I think it’s going to be a successful venue.”

Harvell said she lives near the facility and especially appreciates the store’s deli. She also noted that the city will collect taxes from the store’s sales, and she said the facility could also prove to be a draw to those visiting from outside Brazos County.

Nichols also spoke of the store’s convenient location and anticipated it would have a positive effect on the community.

“It’s always good to have something like this that creates some commercial node to balance the housing out here,” Nichols said. “I’m certainly supportive of what the university has been trying to do on this side of the campus.”

During the ceremony, Alston recognized Lisa Burton, director of the master’s of science marketing program at A&M’s Mays Business School, for a partnership between the store and the program in which A&M marketing students worked with Brookshire Brothers to conduct market research that helped the store hone in on product offerings.

“Our students conducted secondary research, but they also crafted and executed a lot of surveys from a variety of sources — students, faculty, staff and community members — to find out what it is that the people want,” Burton said. “We all know that this area is going to have different preferences than Navasota or Caldwell. The students completed a lot of in-depth investigative work and came up with great recommendations for categories and products that Brookshire Brothers should have on hand for their clients here.”

Ty Longmire-Monford, a soon-to-graduate student in the master’s-level program, said he and a team of classmates worked with Brookshire Brothers throughout the fall semester.

The facility also includes a bar that serves coffee, beer on tap and wine by the glass.

Psaki on gasoline shortage: 'The end is in sight'

Psaki on gasoline shortage: 'The end is in sight'

She was charged with three first-degree felony counts of manufacture or delivery of a controlled substance, tampering with evidence, unlawful carrying of a weapon, possession of marijuana and possession of drug paraphernalia.

According to College Station police, she hit a pillar at the entrance of a restaurant on University Drive on Wednesday.

Organizers of the event said around 75 racers had signed up to compete in 12 classes as of Tuesday, with more possible by Friday.

The solar farm and accompanying 59-megawatt battery storage system, which Enel Green Power expects to have operational by the end of this year, is being constructed south of Iola in the northern part of the county.

Police: 13-year-old arrested in Caldwell after bringing gun to school

The Brookshire Brothers grand opening event on Tuesday, April 27, 2021, featured appearances from the Texas A&M University Yell Leaders, Parsons Mounted Cavalry, Reveille, the Aggie Band and the Singing Cadets. The store, located on George Bush Drive West by Park West Apartments, is across the road from Texas A&M's West Campus and will cater to students, faculty and staff.