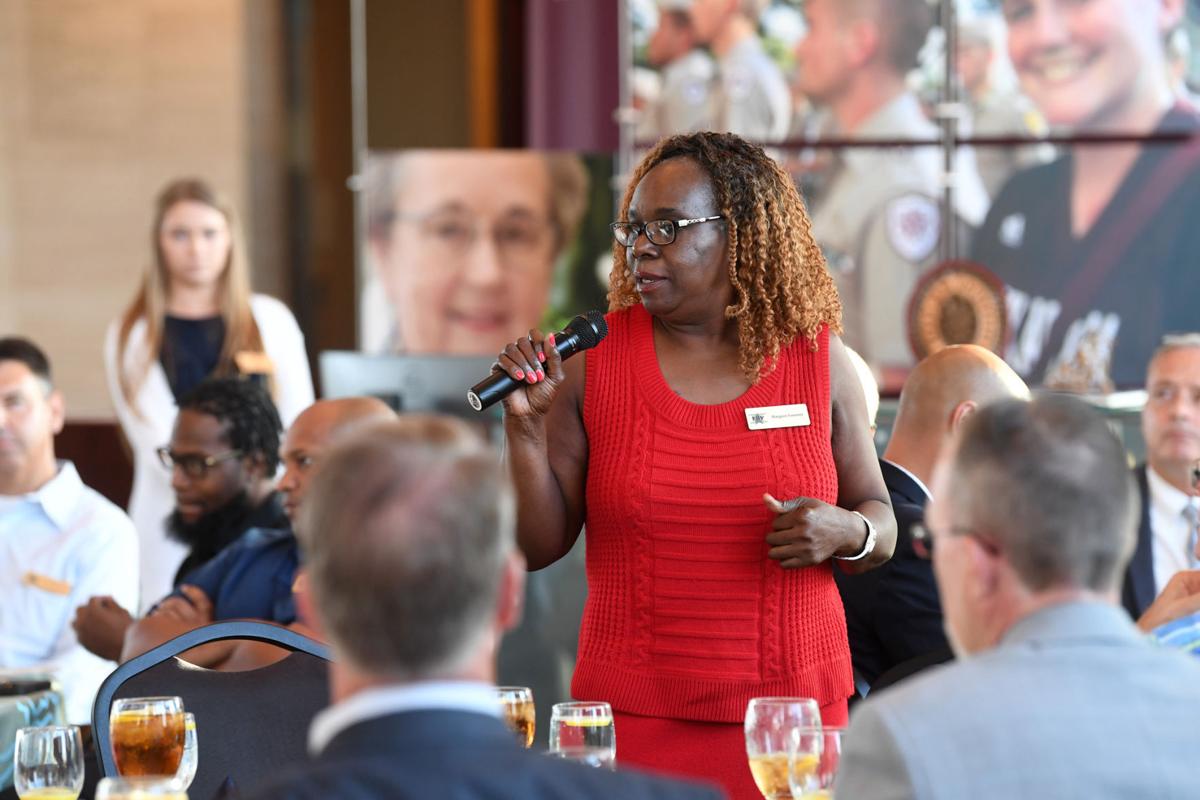 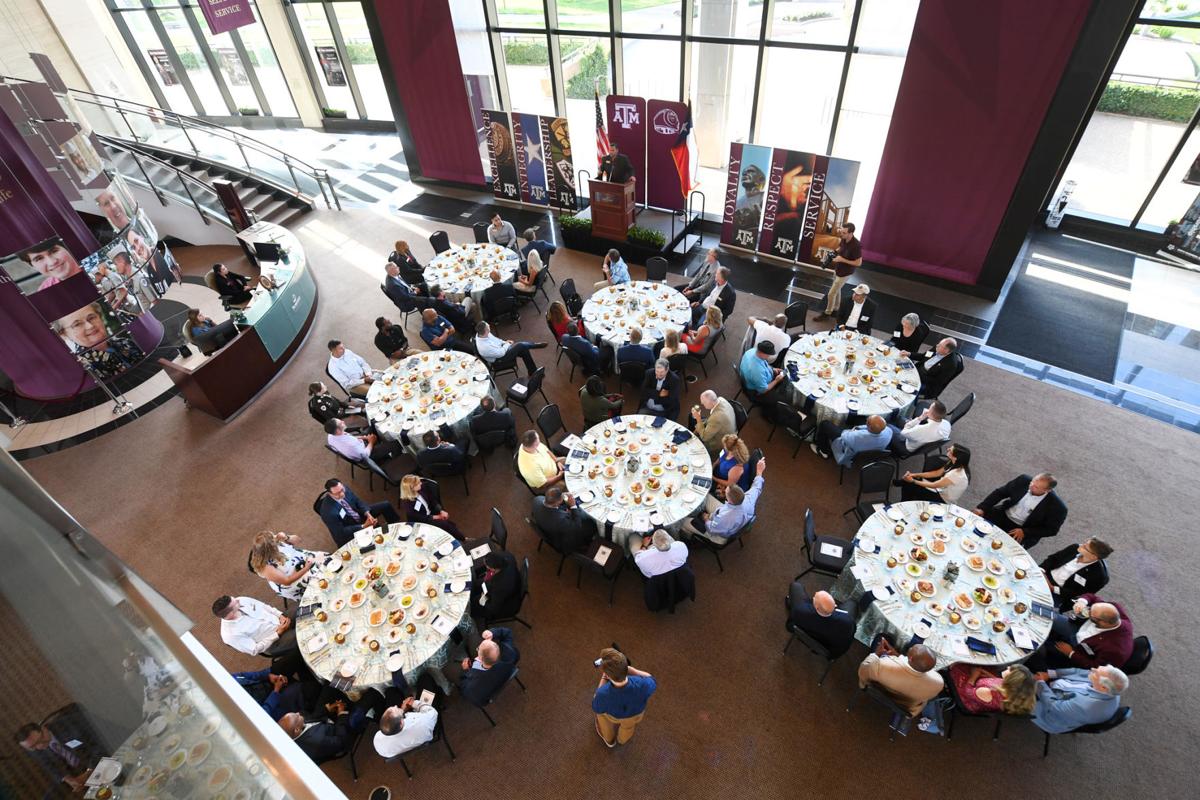 Participants in the Entrepreneurship Bootcamp for Veterans attend an opening ceremony for the program at the Clayton W. Williams Jr. Alumni Center on Saturday with mentors, representatives from Texas A&M and Reynolds and Reynolds, and faculty and staff that will be teaching sessions this week. 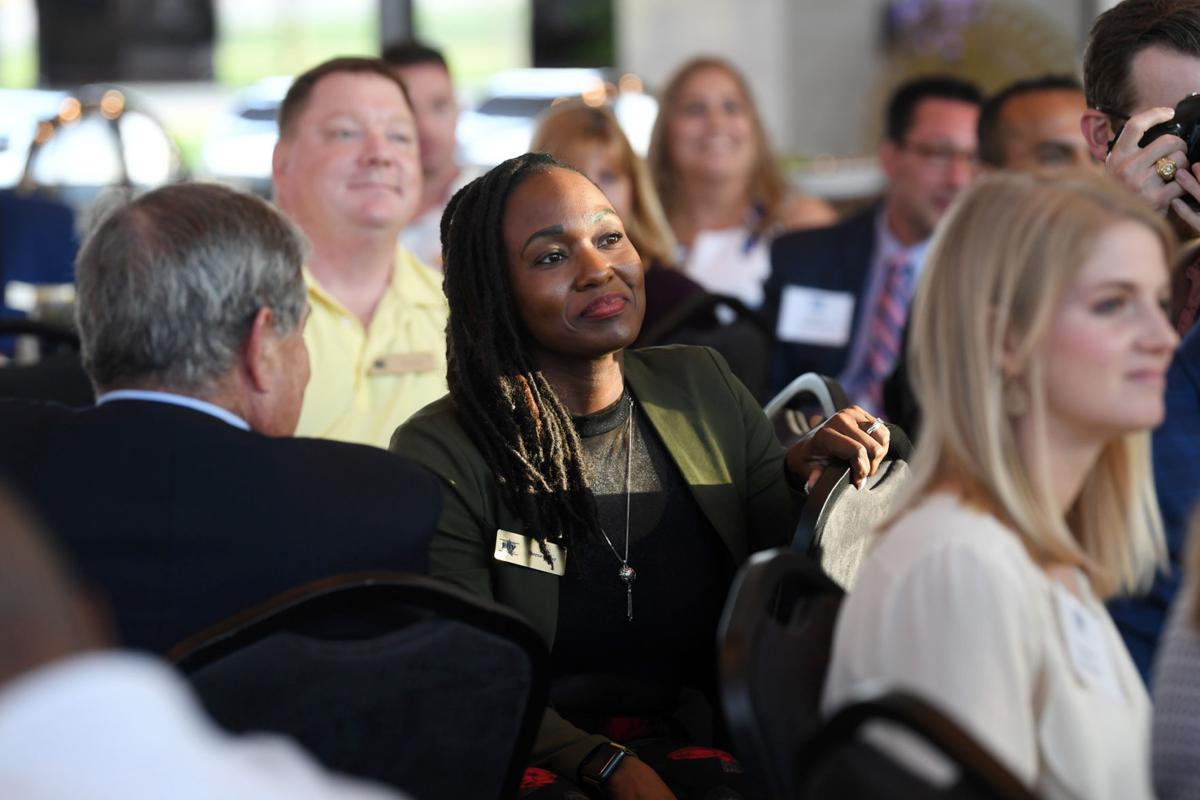 Sheena Parker listens as fellow participants in the Entrepreneurship Bootcamp for Veterans deliver one-minute pitches for their businesses during the program's opening ceremony Saturday evening at the Clayton W. Williams Jr. Alumni Center.

The eight-day Entrepreneurship Bootcamp for Veterans at Texas A&M lets those with military experience learn what it takes to start their own businesses, and how they can build upon the skills they gained in the service.

“This is my opportunity to actually pursue the American dream,” Texas Army National Guard veteran Steve Coon said. “Now that I served my country, I still want to give back to my community, but I also want to do something for me to help validate everything that I have learned, everything that I have been taught. All the knowledge and information I have accumulated through 20-plus years of service in the military, I am now going to turn around and try to apply.”

Blake Petty, director of the McFerrin Center for Entrepreneurship, called the bootcamp one of the most unique programs at the center because it is not geared toward current or former students. The program at A&M is one of 10 at universities throughout the country. It is sponsored by Reynolds and Reynolds and other donors, and is free to the veterans who attend.

The event kicked off Saturday and will end with a closing dinner July 27. The veterans spend each day in panel discussions and mentoring sessions, covering all aspects of business. At the end, the 25 participants will present their business plans. “They joke this is an MBA in a week,” Petty said.

Arthur Jackson, a veteran and one of the volunteer mentors in the program, said it can be fun to see the different ideas and help them develop it into a business.

“A lot of them just need some help and guidance in making the transition from being in the military to now being a business owner,” Jackson said.

Coon applied for the program because it would give him the opportunity to talk with and learn from experts who can help him establish his business. “I don’t know what I don’t know,” he said.

Though he had been waiting to move forward with his business, he said, he plans to go all-in when he returns to Bastrop with what he has gained during the program.

Petty said what surprises him each year is the confidence the veterans gain through the program, calling it inspiring to see the transformation.

“These are folks that have done things that I can’t imagine,” he said. “They have led others into places and doing things beyond fathom, and I consider them the most courageous people on the face of this planet. Yet, when they’re launching their businesses, the self-doubt, the inexperience, the fact that they may not know what their mission is as an entrepreneur, leads a lot of them to start questioning themselves. … They leave here empowered with a confidence that, ‘Yes, I can do this. I can do it successfully.’ And we’re going to give them the tools to help them do it correctly.”

Margaret Fournier, a retired U.S. Army Nurse Corps veteran from San Antonio, said some of the best things she gained from the program after only a few days are the connections she has made, including people who can help her with the technical, manufacturing, financial and legal aspects of her business. She said she was reluctant to apply and attend at first because there would be so many people. But since arriving, “We started up and we haven’t shut up. Even when we go home at 9:30, we sit outside and we talk again.”

It is that networking that Petty is happy to offer the veterans. Not only do the 25 participants meet each other, but they also work with mentors throughout the week.

Stacy Overby, who has served as a mentor for seven years with his wife and attended the bootcamp in 2016, said he enjoys helping the veterans develop their plans. Though he ultimately did not turn his hobby of woodworking into a full-time business, he said people do not have to own a business to be a mentor.

The program extends throughout the country, Overby said, as the veterans who attend these programs start their own businesses.

For more information on the program, go to http://ebv.vets.syr.edu/apply. Those interested in mentoring can contact Petty at blakepetty@tamu.edu.

Participants in the Entrepreneurship Bootcamp for Veterans attend a dinner and opening ceremony for the program at the Clayton W. Williams Jr.…

Participants in the Entrepreneurship Bootcamp for Veterans attend an opening ceremony for the program at the Clayton W. Williams Jr. Alumni Center on Saturday with mentors, representatives from Texas A&M and Reynolds and Reynolds, and faculty and staff that will be teaching sessions this week.

Sheena Parker listens as fellow participants in the Entrepreneurship Bootcamp for Veterans deliver one-minute pitches for their businesses during the program's opening ceremony Saturday evening at the Clayton W. Williams Jr. Alumni Center.