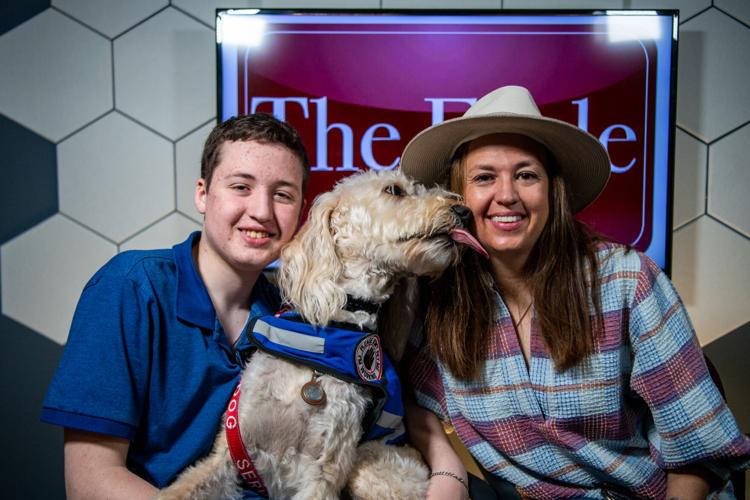 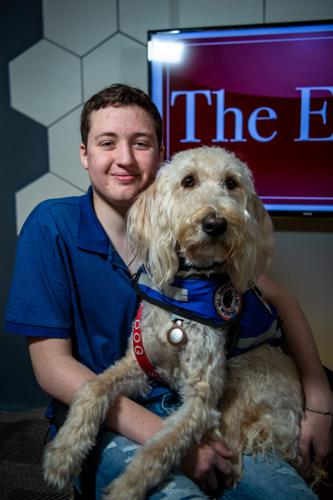 Kyler Lewis (left) is named the 2022 Pediatric Hero of the American Stroke Association. Kyler's service dog, Sammy, has been with the family since May 2021. "Sammy can tell when something is not right with Kyler, " said Raylene Lewis, Kyler's mom. While Sammy is officially a seizure alert dog, he also assists with Kyler's PTSD.

In honor of Stroke Awareness Month, the American Stroke Association selected Kyler Lewis of College Station as the Stroke Hero for 2022 after the teenager used social media as a platform to document his recovery from a stroke at age 15 in 2020.

Stroke Heroes are nominated by the public and are awarded to anyone younger than 18 who has survived a stroke and used that experience to educate, inspire and bring awareness to strokes, according to Kassandra Hunt, the senior director of Community Impact through the American Heart Association.

“Kyler has used this experience and become a huge champion for stroke awareness,” she said. “He shares in his videos what the signs of strokes are and that is why he was selected. We rely heavily on community members and volunteers like him and his family to be able to be the voice to the community about stroke awareness, signs and symptoms.”

One afternoon in April 2020, Kyler and his mother, Raylene, were driving down State Highway 6 in College Station and Kyler couldn’t remember why he was in the car or how he got there. The night before he had a headache and said he was in the worst pain of his life.

“I couldn’t stop crying, I was yelling; it was awful and terrible. … I woke up the next day and I was still in pain the next morning and we got in the car,” he said. “As we were going down the road, I forgot who I was and I don’t remember anything after that. The next thing I know I am in the hospital with a tube coming out of my head — a shunt — and it was draining spinal fluid.”

Raylene had taken him to a pediatrician’s office nearby and was told he had a migraine; she decided there was something more severe going on and drove an hour and a half to the nearest hospital. Upon arrival, after a drug test ruled out any substance use, Raylene urged doctors to look deeper and give him a CT scan.

“Within less than five minutes of the scan, they came back and started working on Kyler and I was told my son had a mass in his brain and he was bleeding in his brain and needs emergency surgery,” Raylene recalled.

The CT scan revealed Kyler had “an acute spontaneous intracranial hemorrhage from a brain arteriovenous malformation (AVM) that he unknowingly had when he was born,” according to an article by the American Stroke Association. “A brain AVM is a condition that is not inherited. AVMs are a random occurrence due to a gene malfunction in utero where a mass of arteries connect directly to veins. Kyler received life-saving external ventricular drain (EVD) surgery to control the fluid build-up in his brain.”

After Kyler went home eight days after his stroke, he said he knew his life would be changed forever and had to let his family take care of him.

“I told my mom I was putting my life in her hands,” he said. “I don’t know what I would do without her.”

Kyler and his mother said they thought only adults had strokes. Since Kyler’s diagnosis, they have been sharing their story to spread awareness about pediatric strokes and AVMs. The AVM in Kyler’s brain is still present and Raylene has been trying to find a cure for him.

“A brain AVM is like a ticking timebomb because it could rupture again at any moment, and there are three ways to treat them. Until [the AVM in his brain] is gone, it can rupture again and cause another stroke,” she said. “I went from being someone who sells houses and focuses on that 24/7, to spending all my waking hours learning about brains and the AVM and trying to come up with a solution.”

During the COVID-19 quarantine period in 2020, Raylene said she interviewed 16 neurosurgeons across the United States and Germany for feedback about ways to treat Kyler. Currently Kyler’s AVM is being treated through radiation at the University of California, San Francisco, and it will take three to eight years to see if the radiation has shrunken his AVM enough for it to be removed, Raylene said.

“It is really hard as a parent because it is like a ‘choose your own adventure book,’ but you are playing with somebody’s life,” she said. “I started a ‘Cure for Kyler’ and got involved in the community and continued my research and the organization TAAF (The Aneurysm and AVM Foundation) reached out to me and said they could help navigate his diagnosis.”

Medical bills have reached into the millions, Raylene said, but organizations such as Miracle Flights, Family House or the Ronald McDonald House have helped take care of some of their expenses while Kyler travels for his radiation and chemotherapy. He also was diagnosed with epilepsy, and in May 2021 he paired up with his service dog, Sammy, who has become his best friend and helps with his seizures, PTSD and potential swelling in his brain.

Kyler said he looks at life differently after experiencing the stroke. He strives to help young people and adults who have experienced this and wants to reassure them they are not alone.

“I have talked to lots of kids; I message them and ask how they are doing. I want to reassure them that they are OK and that I can be right beside them if they need me,” he said. “I talk to adults too because they are also scared.”

Through social media platforms Kyler created, people can share their stories so they feel less alone in their diagnosis, he said. On his YouTube channel, he makes videos explaining how different procedures and treatments are done before and after a stroke for those who may not know what to expect. In the future, he hopes to become a nurse to help others in need.

Raylene said being involved in the community has helped her not lose hope, and as a 1999 Texas A&M graduate she said she hopes to reach out to the Aggie Network for feedback on how to bring awareness to pediatric strokes and brain AVMs.

“When you have this diagnosis, you have no guarantee of anything. We cannot live our life on something we have no control over,” she said. “So instead we focus on things we do have control over, which is educating people.”

In his free time, Kyler enjoys going on outdoor adventures with his friends and takes Sammy with him everywhere he goes. He strives to live his life to the fullest as he hopes to find a cure, he said.

“I felt so gullible [before the stroke] because I was just going on with my life and not paying attention to anything, and now I realize I could have done so much more,” Kyler said. “It’s hard when I see people not take care of their bodies, because now I wish that I was in their position and they are just throwing stuff away. I think that is what upsets me, because I talk to kids who can’t talk, who can’t walk, and kids that live off a machine and it is really hard. I would hope people know their health is important and they need to take care of themselves.”

To find out more or donate, visit “AVM Alliance: A Cure for Kyler & Friends” on Facebook or caringbridge.org/visit/kylerlewis.

A&M Regents approve $1.5B worth of proposed projects, lays out timeline for Bright Area development and construction of new indoor track stadium

Texas A&M’s Board of Regents gave initial approval to add $1.5 billion worth of proposed projects to the university system’s Fiscal Year 2…

A 17-year-old died by suicide hours after being scammed. The FBI says he was targeted in 'sextortion' scheme.

Law enforcement calls the scam "sextortion," and investigators have seen an explosion in complaints from victims leading the FBI to ramp up a campaign to warn parents from coast to coast.

One person detained, one person injured in Bryan shooting Friday

One person was injured in a shooting in the 2700 block of Poplar Circle on Friday morning, Bryan police said.

Allen Academy's 136th graduating class marks the end of one chapter, beginning of the next

Members of Allen Academy’s 136th graduating class received their diplomas Saturday afternoon with an audience of family, friends and educators.

Three Brazos Valley high school seniors, who share a love of agriculture, received scholarships from Capital Farm Credit through the second an…

Kathryn Childers became one of the first five women to serve as a Secret Service agent in 1970; however, growing up, being a first responder w…

College Station police said they are investigating a shooting at Northgate that occurred early Friday.

With thousands of dollars on the line, six Texas companies had to impress a panel of judges with a 20-minute pitch and question-and-answer ses…

US military aircraft flies in 32 tons of baby formula

Starbucks joins McDonald’s and others in Russian exodus

Starbucks joins McDonald’s and others in Russian exodus

How bite marks from dinosaurs revealed something very interesting

How bite marks from dinosaurs revealed something very interesting

Kyler Lewis (left) is named the 2022 Pediatric Hero of the American Stroke Association. Kyler's service dog, Sammy, has been with the family since May 2021. "Sammy can tell when something is not right with Kyler, " said Raylene Lewis, Kyler's mom. While Sammy is officially a seizure alert dog, he also assists with Kyler's PTSD.