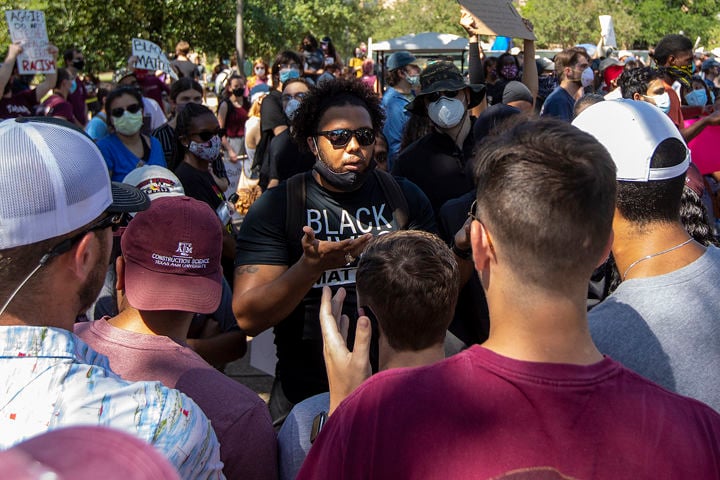 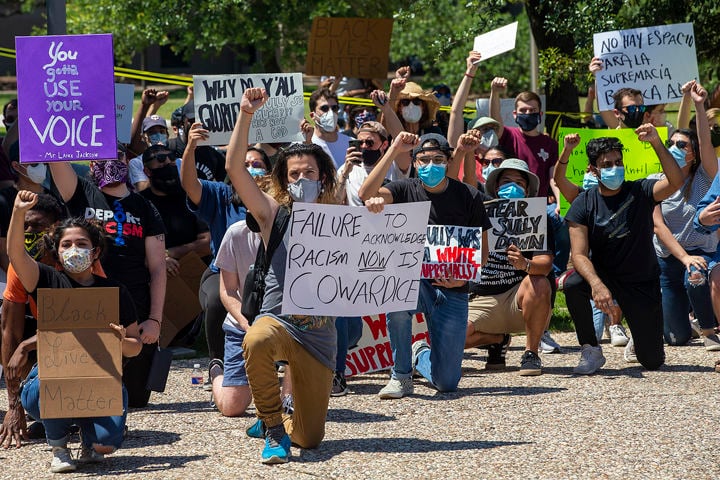 Protesters in favor of the relocation of the Sul Ross statue kneel while counter-protesters play the national anthem during a protest/counter-protest regarding the statue at the Texas A&M Academic Plaza in College Station on Saturday, June 13, 2020. 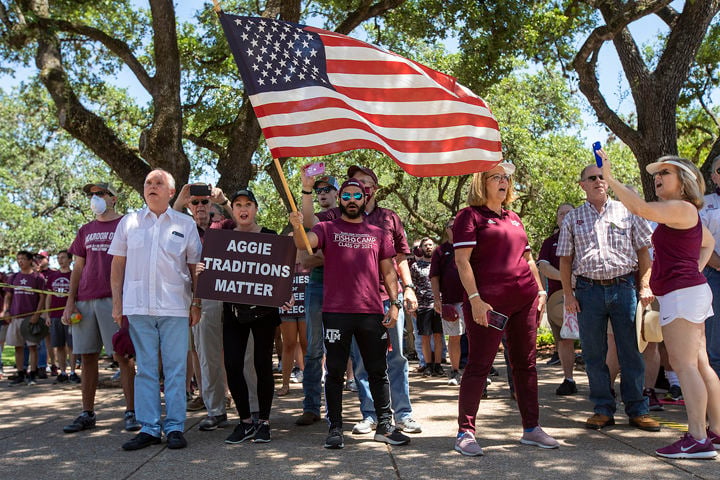 Counter-protesters in favor of leaving the Sul Ross statue at its current location sing during a protest/counter-protest regarding the statue at the Texas A&M Academic Plaza in College Station on Saturday, June 13, 2020. 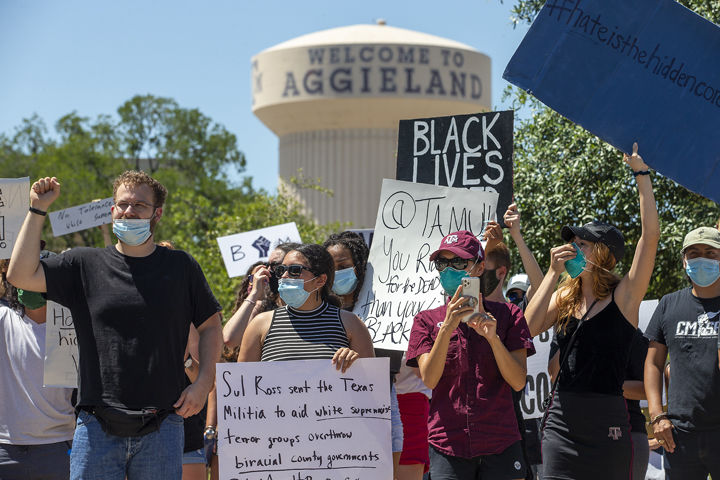 Protesters in favor of relocating the Sul Ross statue demonstrate during a protest/counter-protest regarding the statue at the Texas A&M Academic Plaza in College Station on Saturday, June 13, 2020.

Ross was a Confederate general who later served as governor of Texas before becoming A&M’s president, where he served from 1891 until his death in 1898. He is credited with saving the struggling university in its early years, boosting enrollment and securing additional funding to improve infrastructure. The statue was dedicated in 1918 in front of the Academic Building. A&M students have traditionally placed pennies on the base of the statue for good luck before taking exams. Last week, petitions began circulating arguing for and against the removal of the statue, the oldest on A&M’s campus.

A group of at least 100 who support keeping the statue on campus had gathered shortly before 1:30 p.m., while a group of about 200 in favor of removing it assembled on the Simpson Drill Field at 2 p.m. before marching over to the monument. The statue, which was covered with a tarp and fenced off after officials discovered Wednesday morning that it had been vandalized with graffiti, was protected by several barriers. Although no uniformed officers were visible in the immediate area, Texas A&M staff members stood ready to intervene if necessary. While police had taped off areas of the sidewalk for protesters to stand at a distance from their opponents, those barriers were ultimately disregarded.

Keith Hazlewood, Class of ’74, a resident of Lake Conroe and former Texas A&M Corps of Cadets recruiter, led the charge for those in favor of keeping the statue in its current place. He listed what he considered Ross’ many contributions to the school and its students of all races. He argued that calling a Confederate soldier like Ross a traitor was no better than calling President George Washington a traitor.

“If it wasn’t for Sul Ross, there would’ve been a lot of black people who wouldn’t have an education,” Hazlewood called to his peers.

“When I was going to school here, the inscription on statue depicted the soldier, statesman and knightly gentleman we wanted to emulate at our university,” Rob Brown said.

“The truth about [Ross] and what he did doesn’t support [the protesters’] argument,” Nancy Brown said. “I don’t think they really understand the truth.”

On the other side, a crowd of mostly young people carried signs pertaining to their opposition to racism.

“I feel like traditions are only as good as long as they serve the purpose they were originally meant for, and considering that the values of A&M have changed drastically since its initial creation, the things we uphold need to reflect our new values, which are focused on equality over tradition,” said Faith Hardin, a 27-year-old graduate student.

Hardin said the vandalism of the statue last week will not help the cause.

“I don’t know if we should replace the [Sul Ross] statue with anything, because erasing the past is not good. But I don’t think it needs a place of honor. I think putting it in the museum would be the most likely option.”

Sonia Hernandez, an A&M associate professor of history, serves as coordinator for the school’s Latino and Mexican American Studies program. She spoke to the crowd, sharing that she and her colleagues had drafted a letter for local media calling for the statue’s removal.

“As faculty, we have a responsibility and a right to come and support our students.,” she said. “It’s about time we not follow these traditions with a hateful and hurtful past.”

Protesters called for the school to establish race and ethnicity courses required for all students, increase funding for the Office of Diversity and relocate the statue to the Cushing Memorial Library.

Though exchanges between the two groups occasionally got heated, there was no violence. One person was arrested on a misdemeanor criminal trespassing charge.

By the end of the afternoon, while shouts did continue, many people had crossed barriers to speak with protesters on the opposite side. Small groups broke off of the main protests to hold debates and discussions and some could be seen shaking hands.

Hope to see a better America where everyone is equal

Texas A&M University President Michael K. Young announced the creation of a task force on race relations and a commission on statues on We…

Time to recognize Sul Ross as an honorable man

WATCH NOW: Protests for and against Sul Ross statue at Texas A&M

Protesters in favor of the relocation of the Sul Ross statue kneel while counter-protesters play the national anthem during a protest/counter-protest regarding the statue at the Texas A&M Academic Plaza in College Station on Saturday, June 13, 2020.

Counter-protesters in favor of leaving the Sul Ross statue at its current location sing during a protest/counter-protest regarding the statue at the Texas A&M Academic Plaza in College Station on Saturday, June 13, 2020.

Protesters in favor of relocating the Sul Ross statue demonstrate during a protest/counter-protest regarding the statue at the Texas A&M Academic Plaza in College Station on Saturday, June 13, 2020.