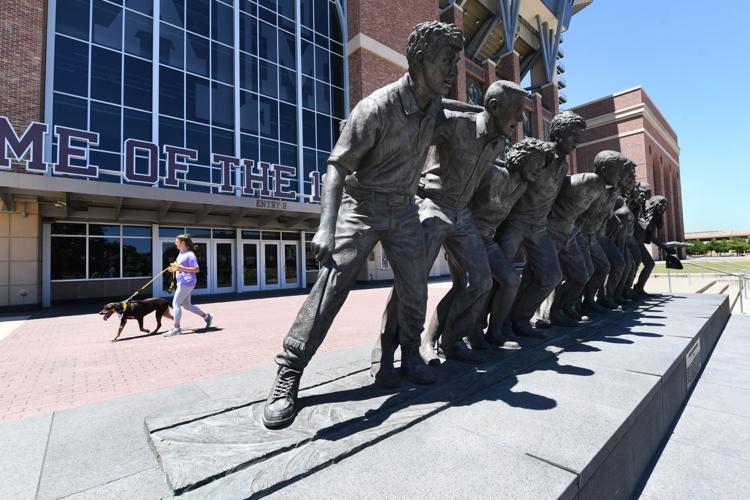 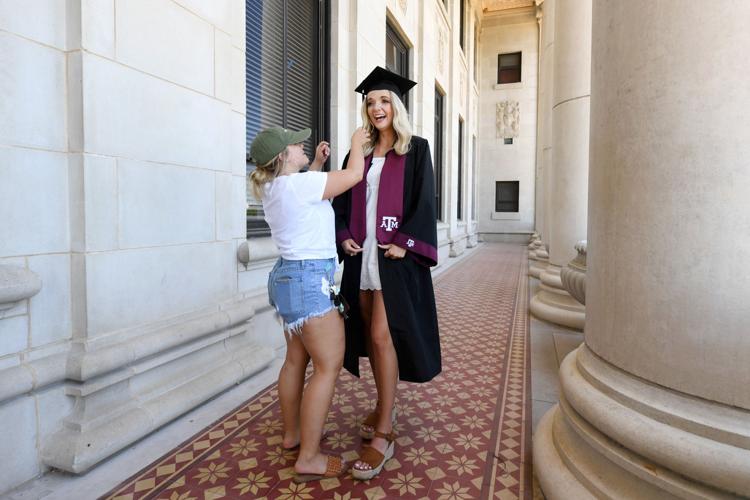 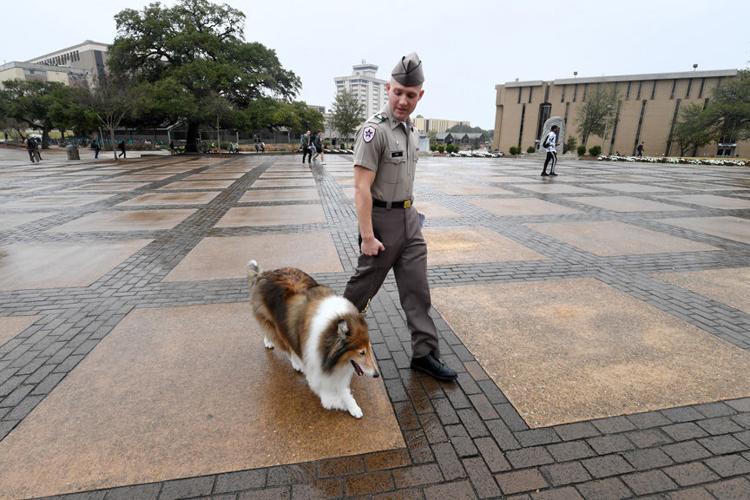 Mascot Corporal Colton Ray walks to the Quad with Reveille IX following class at Texas A&M Jan. 13, 2020, as students return to campus for first day of the spring semester. 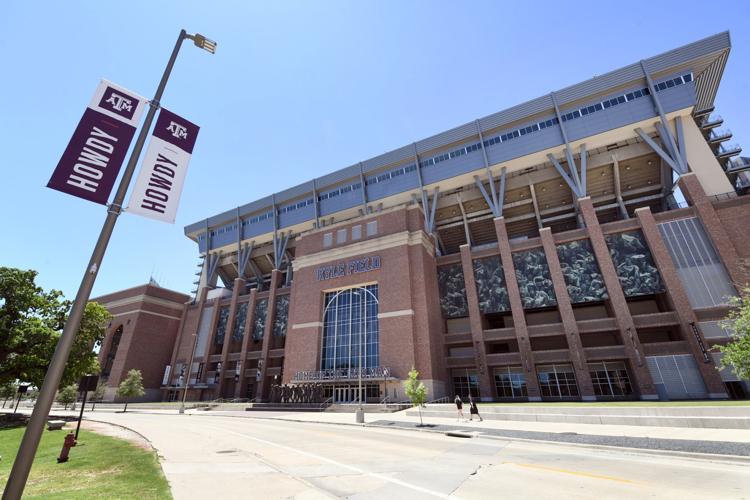 Pedestrians walk past Kyle Field on Thursday, April 30, 2020. In addition to seeing students return for on-campus classes in the fall, Texas A&M University System Chancellor John Sharp wants plans made for football to be played.

Students, and football, are expected to return to Texas A&M this fall.

Texas A&M intends to reopen its 11 university campuses for the fall semester and be ready for football, Texas A&M University System Chancellor John Sharp told the system’s presidents in a phone call Thursday morning. Texas Tech University has also announced that it plans to resume on-campus classes in the fall. Both schools said they are drawing up precautions to keep students safe while bringing them back to campus.

Sharp wants to “make this happen,” according to an A&M spokesman.

Texas A&M President Michael K. Young reiterated Sharp’s comments to have campus open again in the fall, with online classes as an option, in an email to students and faculty Thursday afternoon. Young added summer enrollment is up at A&M and will announce plans for August graduation by the end of May.

“In the fall, our Aggiebound Aggies numbers are also up. While we know online classes are an option if needed, we plan to be fully open and operational, with dedicated faculty and staff leaning into preparing for all the requirements necessary to do so safely across academics, athletics and campus activities. We will continue to keep you updated in detail for plans to open responsibly, and will, of course, follow updated federal, state officials and healthcare guidance that dictate our ability to do so,” Young wrote in the email.

Meanwhile, University of Texas System Chancellor James B. Milliken told the Tribune during a live event Thursday that “it’s pretty clear we will be open in the fall.”

Unlike his counterpart at A&M, Milliken didn’t make a declaration about football.

“Sports are maybe the only thing above the chancellor’s pay grade,” he said.

Many Texas colleges and universities were on spring break when spread of the new coronavirus began disrupting higher education. Although some students returned briefly after break, campuses were ultimately shut down and classes moved online in mid-March.

Baylor University, which is private, has already announced that it will resume on-campus classes in the fall.

The shutdowns have been costing schools millions in lost revenue, at least $19.5 million for A&M, a spokesperson told the Tribune two weeks ago. The federal stimulus programs gave A&M just under $40 million to be split between covering losses and financial aid for students.

Texas Tech received about $25.5 million in federal aid. Students at the Lubbock campus will return to classes with a list of precautions including social distancing and testing, President Lawrence Schovanec said in a letter to the campus Wednesday.

“We need to recognize that campus life will be different when we return in the fall,” Schovanec said. “We are developing several ways to reduce the density of groups in our student facilities, large lecture-based classrooms, and our popular campus areas. These same plans extend to special events, including athletics.

“Strategies for fall instruction will involve a blend of online and face-to-face classes for some students. We will also take extra precautions to protect the most vulnerable among us."

In an interview, Schovanec said he is working with his staff as well as the leaders of the medical schools in the Texas Tech System to come up with a plan. He said the group is considering nontraditional class schedules like mini-semesters within the larger ones and staggering class dismissals.

“One of the advantages to that approach is that students and faculty would have more flexibility in deciding when they will be on campus and when they feel safe,” Schovanec said.

He also said testing and retracing the steps of anyone exposed to the coronavirus will be integral to a safe reopening. However, Schovanec said it is too early to know what the scope of testing will be.

University policies have garnered considerable attention in the response to the coronavirus pandemic since the close quarters of dorms and student apartments could potentially accelerate the spread of the virus. But moving to online learning also presents challenges, especially for students who don’t have stable housing or internet outside of school.

Football presents an even more complex challenge. Games in the fall in Texas can attract upwards of 100,000 fans, and ticket sales and television contracts are major revenue drivers for the schools.

Typically, A&M’s football season brings in $85 million in revenue, including donations and ticket sales. But Jeff Toole, chief financial officer for athletics, said the school is operating under the assumption that game attendance will drop, though early ticket sales have remained fairly steady so far.

“The social distancing in a 100,000-seat stadium ... that could be challenging,” A&M Athletics Director Ross Bjork said.

Still, things could change between now and football season. Abbott announced this week that the Texas economy would begin opening in phases starting Friday, but if the state sees a spike in the number of COVID-19 cases after two weeks, that decision could be reversed. And experts have warned that even if the spread begins to slow in the summer, the coronavirus could see a resurgence as temperatures drop in the fall and winter.

Dr. Anthony Fauci, who is leading the White House’s public health response to the coronavirus pandemic, said this week that major sports might not be able to return to action this year.

College football schedules are set in a bifurcated manner. Each team plays in a conference, which sets a conference schedule of eight or nine games.

Nonconference games are then arranged by the schools; usually two schools enter into contracts individually with other schools.

Sharp wants to “make this happen,” according to an A&M spokesman, but said he will defer to the governor, the A&M System Board of Regents, the NCAA and A&M’s Southeastern Conference for the final decision.

SEC spokesman Herb Vincent said, “Our current focus is on preparing to play the 2020 football season as scheduled.”

Schovanec also acknowledged that other parties would have to sign off on playing football. But he also said sports are important beyond their entertainment value.

“Being able to play some part of the football schedule is crucial to our athletic budget,” Schovanec said. “We are very focused on trying to make sure that we can come to some sort of arrangement where there will be football.”

However, Schovanec said the fall season could come with a range of nontraditional changes like fewer games and earlier starts. He said packed stadiums are the least likely to return.

“I don’t expect that. However, I think it’s premature to make any statement about what will be the game-day environment,” Schovanec said. “We’re all worried about a second surge, and I think what actually happens in stadiums will depend on the guidelines of the state and the local government.”

Eagle staff contributed to this report

Gallery: Few on campus at Texas A&M as Bryan-College Station community combats spread of the coronavirus

Four new cases of COVID-19 were reported in Brazos County on Thursday, raising the total number of confirmed cases to 197.

The city of Navasota will reopen the Navasota Public Library on Friday.

The Brazos Transit District will receive more than $8.8 million in coronavirus relief funding from the Federal Transit Administration as part …

Health officials in Brazos County reported five new cases of COVID-19 on Friday, for a total of 202 cases in the county.

Texas A&M University divisions and academic colleges have been tasked with making plans to reduce their budgets by 7.5%, in case the need …

Texas A&M University has no plans to reopen the campus beyond what is already taking place, the university's president announced in a lett…

Mascot Corporal Colton Ray walks to the Quad with Reveille IX following class at Texas A&M Jan. 13, 2020, as students return to campus for first day of the spring semester.

Pedestrians walk past Kyle Field on Thursday, April 30, 2020. In addition to seeing students return for on-campus classes in the fall, Texas A&M University System Chancellor John Sharp wants plans made for football to be played.