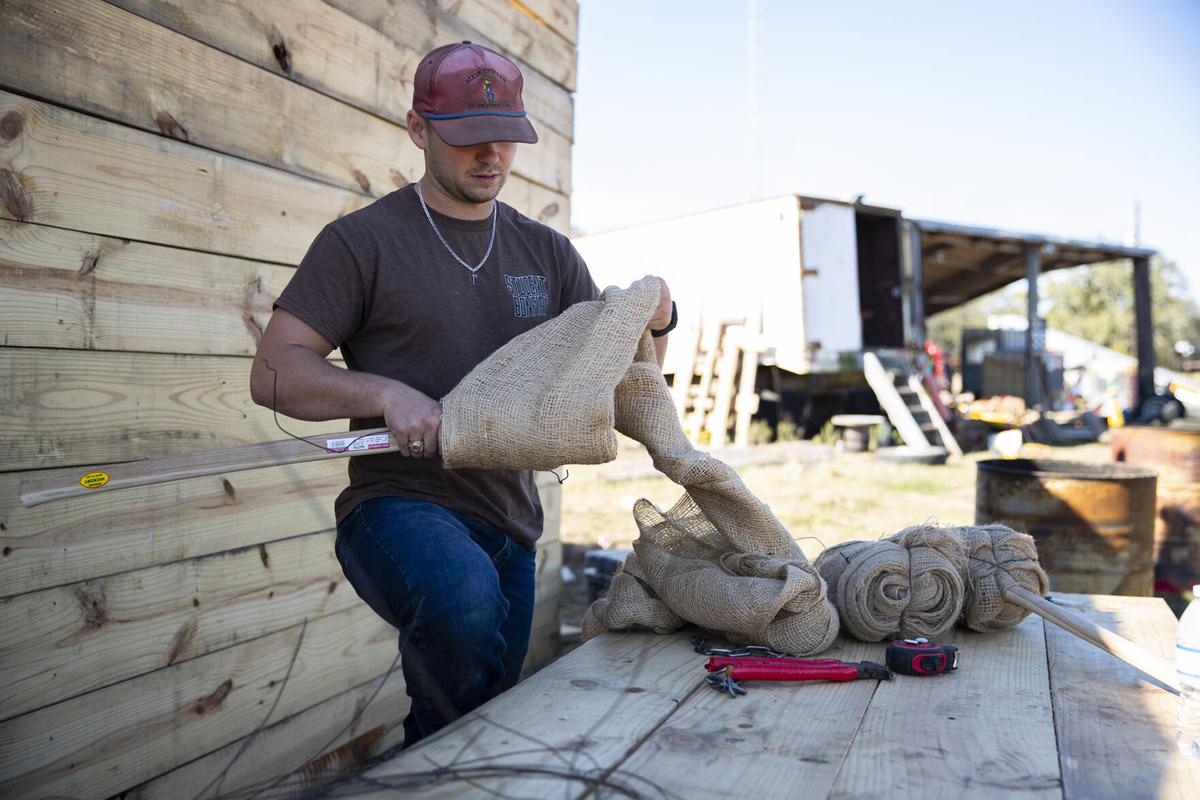 Jackson Blivin uses burlap and wire to make a torch for the bonfire lighting ceremony Tuesday at the Student Bonfire site off Old Hearne Road in Bryan. 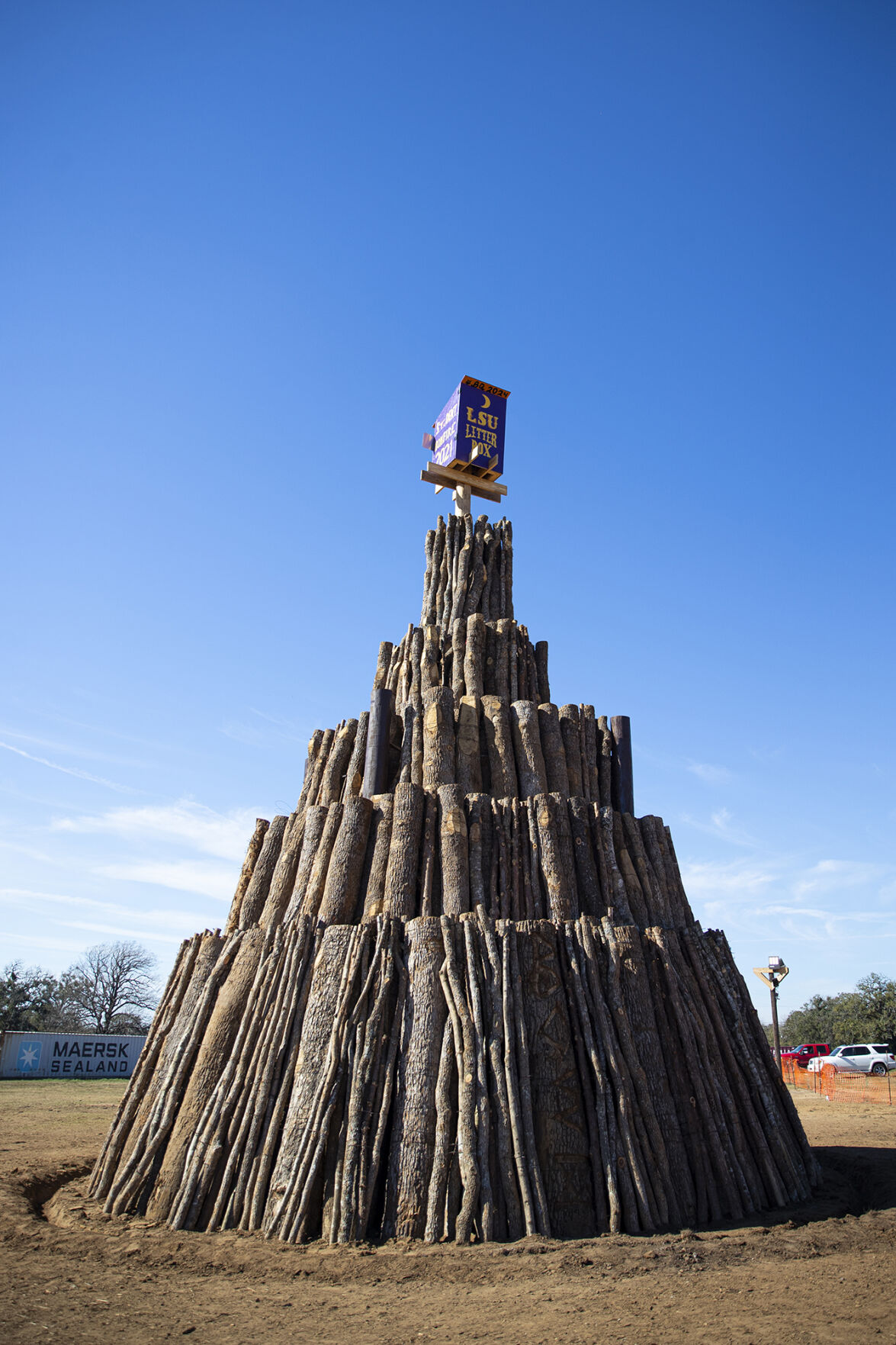 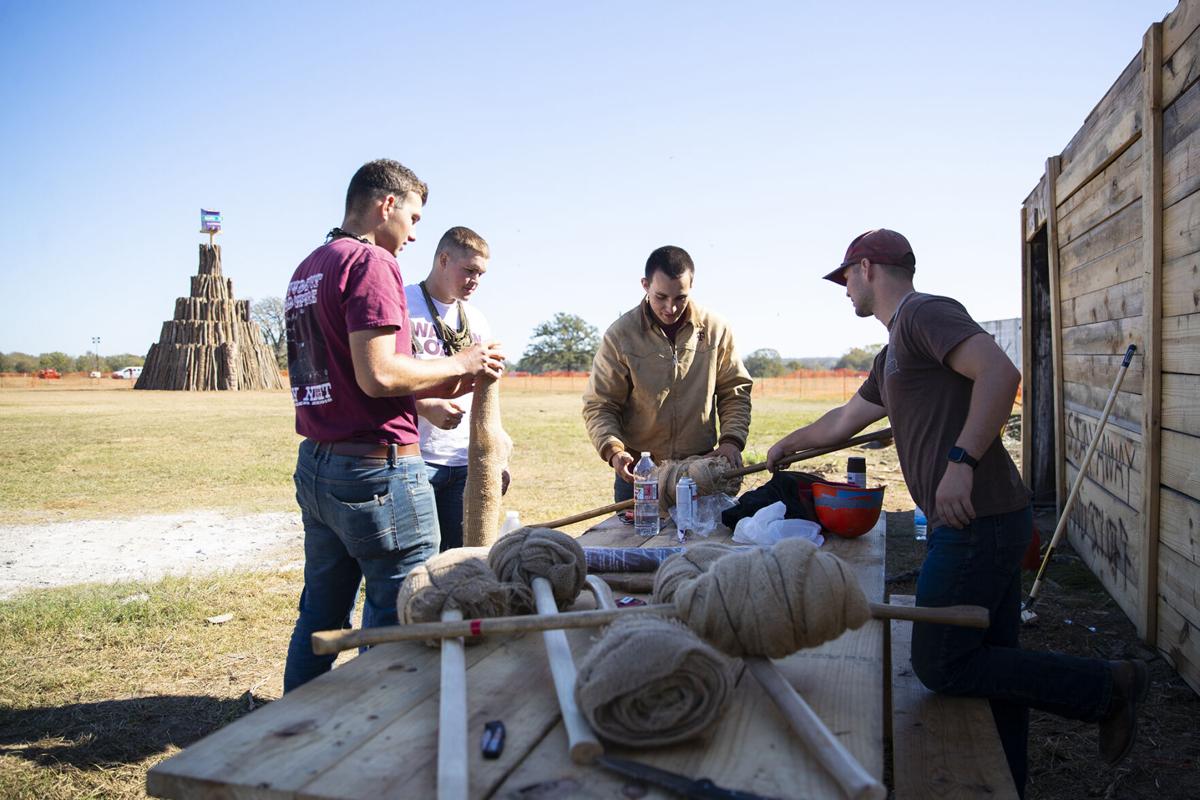 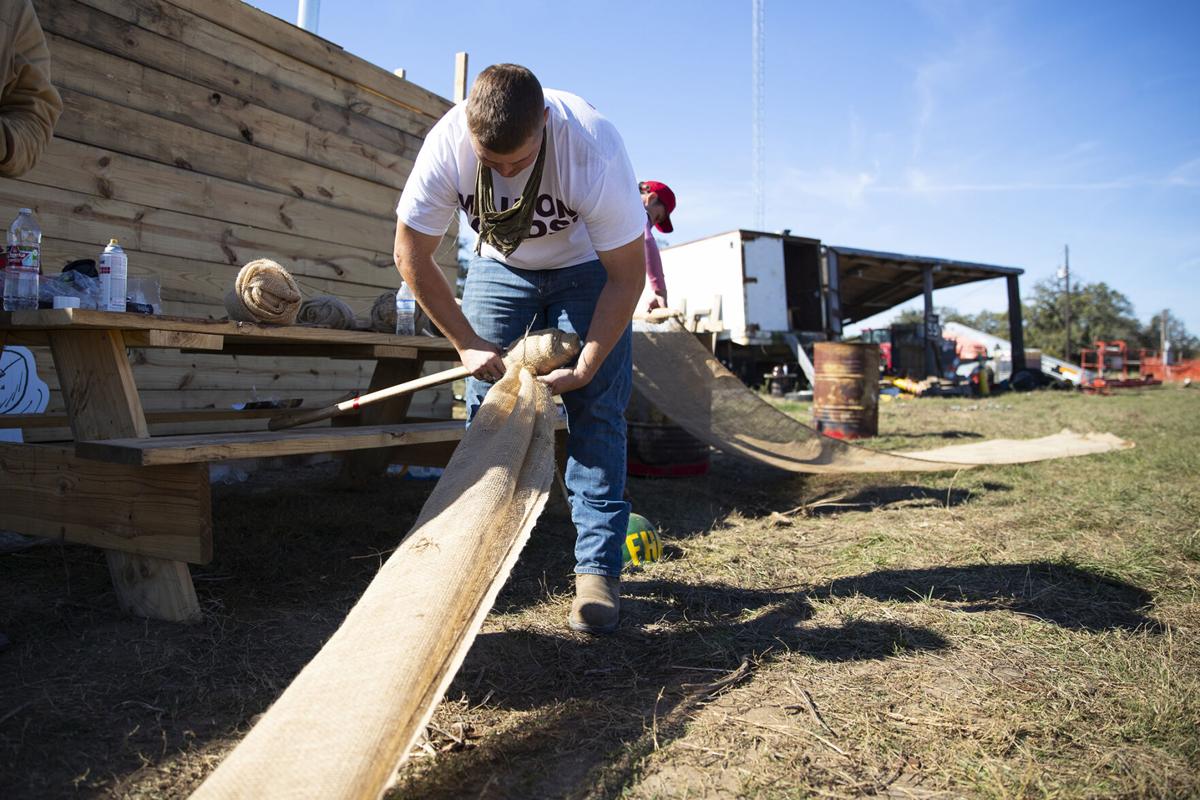 Matt Cline uses burlap and wire to make a torch for the bonfire lighting ceremony Tuesday at the Student Bonfire site off Old Hearne Road in Bryan. 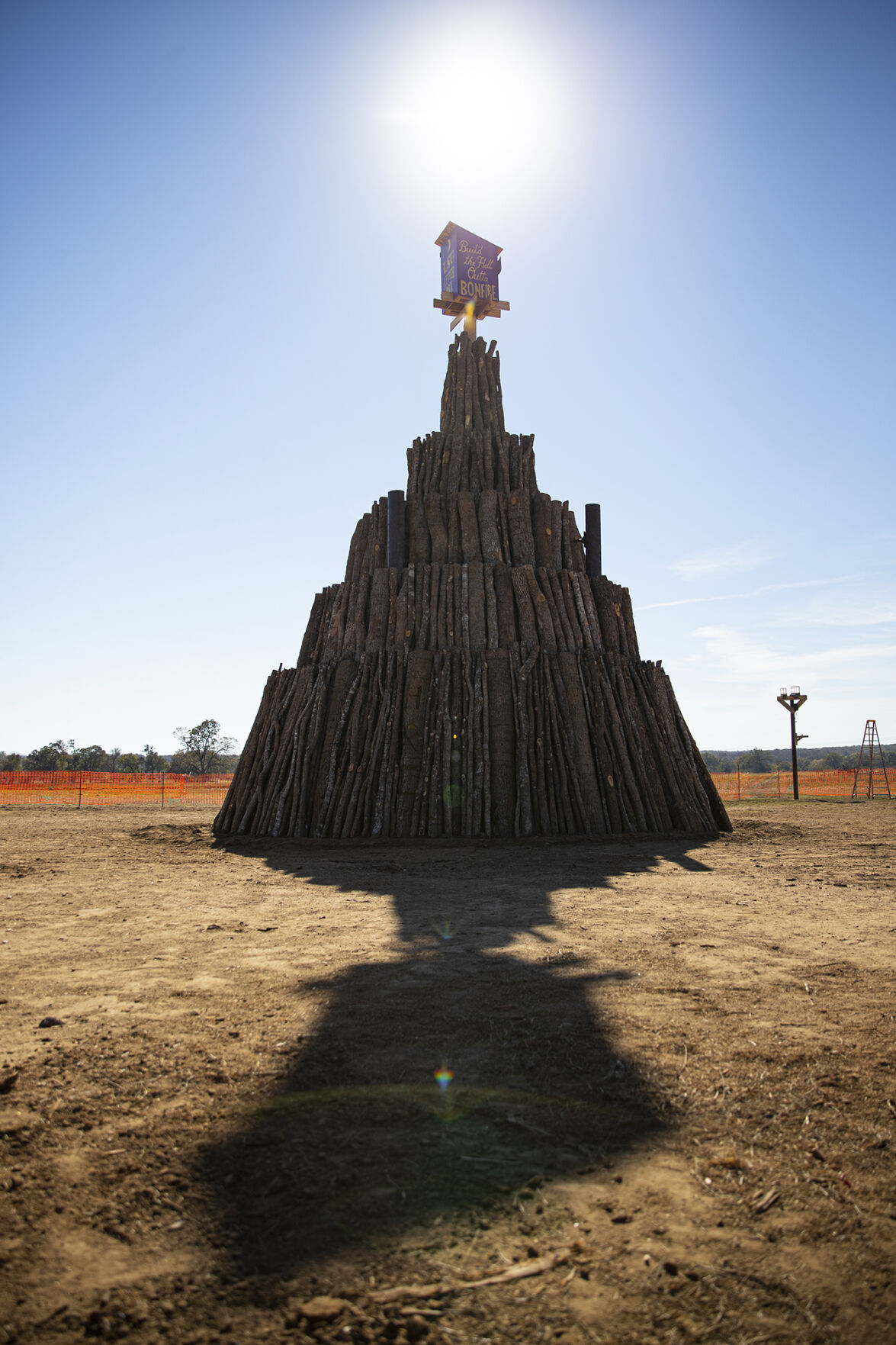 The 2021 Student Bonfire stack was set to burn at 8:50 p.m. Tuesday near Old Hearne Road in Bryan. 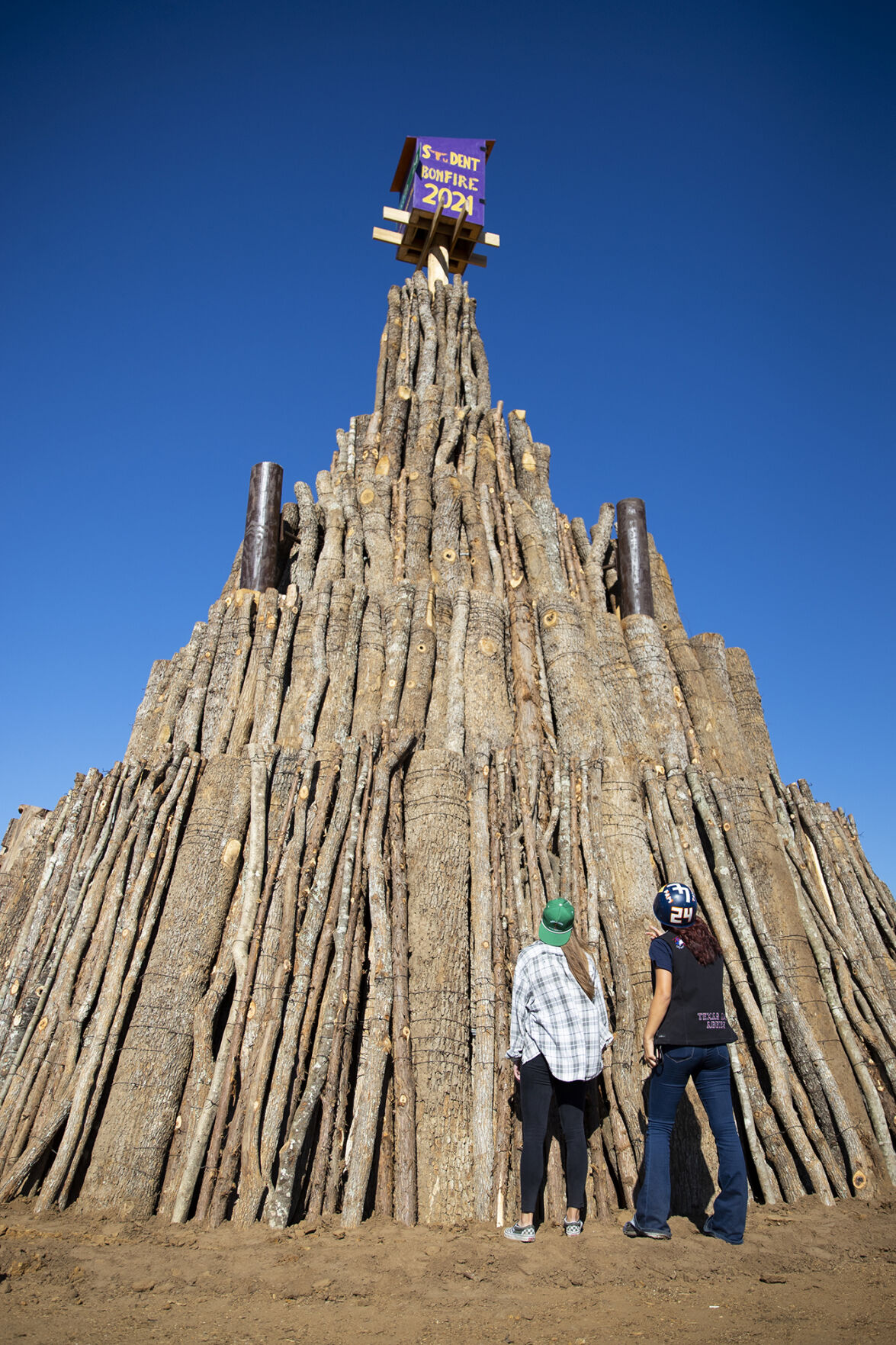 Ashley Patton, left, and Annie Martin inspect the wires on the stack at the Student Bonfire site off Old Hearne Road in Bryan on Tuesday.

The student-organized bonfire is no longer held on the university campus following the 1999 collapse that killed 12 and injured 27; however, the tradition has taken on a new meaning as a living memorial to those 12.

“If you go and read all the portals, it isn’t sadness,” junior red pot Matt Cline said, referencing the Bonfire Memorial on campus. “They died doing exactly what they loved. What we’re doing here is showing more people that love — the thing that tied them all together.”

Senior red pot Jackson Blivin said, ultimately, bonfire is about relationships and connections that tie the new generation of Aggies with “old Ags.”

People who were part of Aggie Bonfire decades earlier, including one man from the Class of 1984, return each year to help the current leadership and crew.

Bonfire is no longer an official Texas A&M event and has moved off campus to its current location off Old Hearne Road near OSR in Robertson County. Since the early 2000s, Student Bonfire, which is a nonprofit organization, has been in place to represent “the undying flame of love that every loyal Aggie carries in their heart for the school,” as stated on the Student Bonfire website.

Cline called it humbling to be a part of an organization like Student Bonfire that connects new and old generations of Aggies.

“In the grand scheme of things, I’m just one step in the furthering of this organization and making it better,” Cline said, adding both his and Blivin’s goal is to find ways to leave the organization better than they found it, following the trend of previous red pots.

“Although the bonfire, again, will always stay the same size and [be] built the exact same way, everything that we can improve in regards to safety, efficiency, quality, that’s what we’re doing,” he said. “It’s just humbling to know that I’m just one stepping stone to make this organization greater, and people who come after me will do better than I did.”

Blivin described the Bonfire crew as his “extra family,” and Cline said it is a place where anyone can find a place to belong.

“I just found that, to me at least, bonfire’s a place where it doesn’t matter who you are; it doesn’t matter the background you come from, you will always find a place,” Cline said. “For lack of better words, it’s the ‘Island of Misfit Toys.’ Anyone who can’t find a place in college is always welcome in Bonfire because you’ll have people here that will support you and care for you.”

Blivin encouraged anyone who has not attended a bonfire to do it and get involved if they are a student.

“It’s one of those things I think everyone should experience at A&M,” he said.

A friend who came to the bonfire for the first time last year told him it represents “the spirit that can ne’er be told,” Blivin said.

Tuesday's 2021 bonfire marked a return to a full event after the 2020 event had attendance restrictions in place due to the COVID-19 pandemic.

Blivin and Cline are both the first in their families to attend Texas A&M, with Blivin coming from a military family and Cline moving from Illinois.

“When applying to colleges, Texas A&M was just one of the ones I applied to, and then I ended up going here, and I’m very glad I did,” Blivin said.

Cline said each year when the bonfire stack is lit, as it was at 8:50 p.m. Tuesday, it marks the closing of one Bonfire year and the start of the next year’s work and fun.

Prairie View A&M is a small, historically black university with an enrollment just north of 8,000 students and located in a rural town, bu…

Jackson Blivin uses burlap and wire to make a torch for the bonfire lighting ceremony Tuesday at the Student Bonfire site off Old Hearne Road in Bryan.

Matt Cline uses burlap and wire to make a torch for the bonfire lighting ceremony Tuesday at the Student Bonfire site off Old Hearne Road in Bryan.

The 2021 Student Bonfire stack was set to burn at 8:50 p.m. Tuesday near Old Hearne Road in Bryan.

Ashley Patton, left, and Annie Martin inspect the wires on the stack at the Student Bonfire site off Old Hearne Road in Bryan on Tuesday.