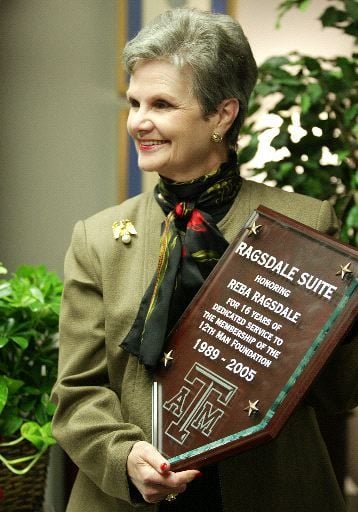 Reba Ragsdale, director of donor relations, special events and travel, displays the plaque presented to her that will mark a suite in her name. 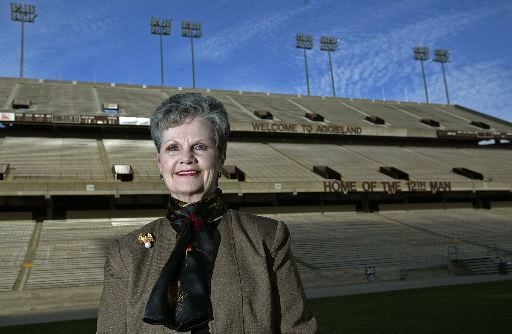 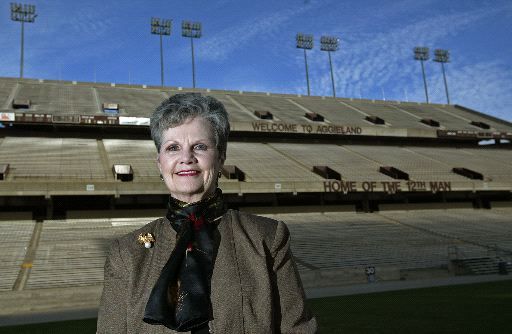 'I know Reba has a house somewhere, but she seems to spend all her time in her office, so it was fitting to name it the Reba Ragsdale Suite," said Miles Marks, her boss at Texas A&M University's 12th Man Foundation.

At Ragsdale's mid-December retirement party, Marks, executive director and chief executive officer of the 12th Man Foundation, presented her with a plaque that made the name official. Ragsdale served as the foundation's director of donor relations, special events and travel for 16 years.

Marks very nearly didn't have the opportunity to pay homage to Ragsdale.

"She had submitted her resignation before I came here eight years ago," Marks said. "She just didn't want to go through another change in leadership. She agreed to stay on until we found a replacement. Six months later, she asked to speak to me. And I said I wanted to speak to her. I said, 'You first.' She said, 'I have enjoyed working with you and would like to rescind my resignation.' I said, 'That's what I wanted to talk to you about, rescinding your resignation.'

"It's been an honor to work with her. She's become one of my best friends. She has given much more than she has received."

The 12th Man Foundation is charged with raising money to support A&M's athletic program, which receives no state funds. Donations cover scholarships, equipment, facilities and myriad other needs of a major athletic program. Ragsdale's responsibility has been to arrange travel, accommodations and food for donors who travel to road football games; she also handles pregame activities in the Zone Club for home games in Kyle Field.

The latter assignment went from routine to rushed in September when the Aggie game against Texas State was moved from Sept. 24 to Sept. 22 to dodge Hurricane Rita.

"President [Robert] Gates made the announcement at noon Wednesday that we would play on Thursday. The main problem was changing the pregame buffet," Ragsdale said. "Food Services was obligated to feed the [hurricane] evacuees being housed in Reed Arena along with the people in the triage hospital at the Vet School. I negotiated with Food Services to serve 200 people, and we had 180 show up. Everybody pitched in and made it happen. It was amazing to me how many people came up here for the football game not knowing if they would have a house when they got back."

When the team goes on the road, Ragsdale books the hotels, negotiates rates, sets up pregame meals and arranges transportation from the hotel to the stadium for the donors. Not in her job description but performed just the same: She orders birthday cakes and anniversary flowers.

"My goal is to provide good customer service, whatever that turns out to be," she said.

On one occasion, that meant getting Food Services to bring a blender to a pregame buffet so the food staff could prepare food for a donor who was recovering from heart surgery. And one donor was allergic to beef, so that meant a special order of chicken or fish.

Most trips go smoothly, but the ones that don't are the ones she remembers.

"During a pregame meal in Manhattan [Kan.], one of our donors thought she was having a heart attack," Ragsdale said. "I called 911, and an ambulance took her and her husband to a hospital. During the game, the husband called me on my cell phone and said his wife was all right. So the bus drove by the hospital, picked her up and went back to the hotel."

The largest number of donors to travel to a game was for the Sugar Bowl game against Ohio State in 1999.

"We had to stay in 11 different hotels," Ragsdale said. "It was a nightmare. We had 22 buses to work out the logistics for."

A different kind of nightmare happened at the Meadowlands in New Jersey when the Aggies played Florida State in the 1998 Kickoff Classic.

"When the game was over, one of our couples was missing," Ragsdale said. "I got in a car with the parking security and drove around, but we couldn't find them. It turned out they took the wrong exit and panicked and called a cab."

Then there are culinary disasters.

"After an Oklahoma game, the hotel buffet ran out of food, and we had lost the game. People were not happy."

At an Independence Bowl game in Shreveport, La., on New Year's Eve, Ragsdale couldn't book a major hotel, what with the casinos and all. "We rented a building at the fairgrounds and had it catered," Ragsdale said. "The service was so slow that Miles and I ended up serving the food. On top of that, before we finished eating, it started snowing."

For the past 16 years, Ragsdale said, she has had the perfect job.

"I love sports. I was raised with three brothers, and they talked me into playing basketball or football or baseball. I couldn't talk them into playing dolls."

Ragsdale's husband, Bob, was an All-America long jumper at Texas A&M in 1953.

"He knew a lot of people who were members of the 12th Man Foundation, so he was as excited as I was to get this job. I still enjoy the excitement, and I marvel that things turn out as well as they do."

But enough is enough, Ragsdale said.

"I got my first job when I was 16. I just turned 66, so I've been working for 50 years. That's enough. I want to go to my grandkids' football and basketball games. I want to go to a 3 p.m. Aggie baseball game. I want to start a scrapbook to leave a legacy for my family."

On Dec. 29, Ragsdale will walk out of her office in the north end zone of Kyle Field and close the door that reads, "Reba Ragsdale Suite."

The Texas A&M University Board of Regents approved eight action items Monday, at an expected cost of $24.75 million, in response to a repo…

One A&M professor fired, one disciplined after investigations into conduct and commentary

The Texas A&M University System is set to open its second academic building on Tuesday at the RELLIS Campus in Bryan.

Reba Ragsdale, director of donor relations, special events and travel, displays the plaque presented to her that will mark a suite in her name.