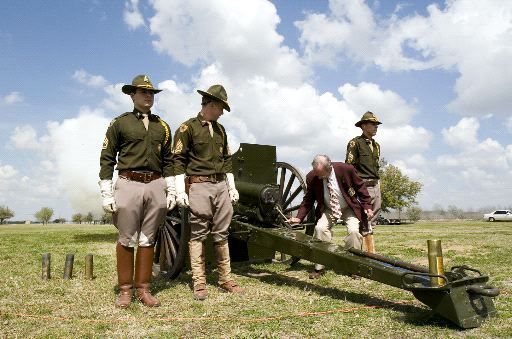 Texas A&M Corps of Cadet members Christopher Simmer, David Kientzy and Nick Gonzales stand ready as Dick Birdwell, from the Texas A&M class of '53, fires the cannon in honor of the four classes of Aggies that lived off-campus from 1950-53. 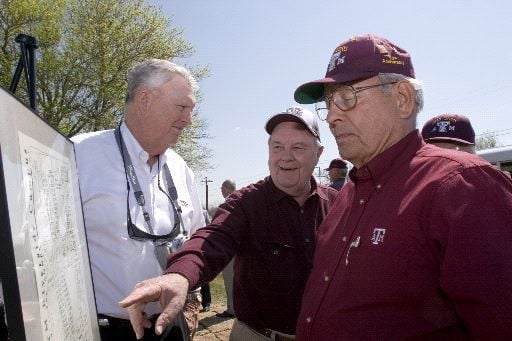 Ed Richardson, Ran Newman and Glinn White look at a diagram of the Annex Complex on Saturday afternoon at the Texas A&M Riverside Campus.

Skip Johnson Jr. was 18 years old when he arrived in 1949 at the Texas Agricultural and Mechanical College. Not long out of high school, he said, he never expected the conditions that awaited him.

The temperatures dipped just below zero that day, but to make it worse, he learned that he'd be moving not onto the main campus but into a barracks without heat miles away where about 700 other men lived.

World War II recently had ended, so by 1946 enrollment at Texas A&M was soaring. Returning veterans, aided by the G.I. Bill, came to the college to continue or start their education, but there was no room. To manage the overcrowding, the college made use of an inactive U.S. Air Force base in Bryan that's now known as Riverside Campus.

Over the next four years, about 5,500 men lived, studied, ate, showered and attended classes at the Annex, where the walls were made out of black tar-paper.

Johnson's old home away from home was honored Saturday with the dedication of a plaque as a permanent record of those experiences. One by one, former students who graduated more than five decades ago lined up to reminisce about their lives in the Annex. Even though it wasn't the first-year college experience they dreamed about, it ended up creating memories and bonds cherished to this day.

"I came in January, so I only lived [in the Annex] for one semester," said Johnson, who eventually joined the National Security Agency and later retired in College Station. "But I lived with all the freshmen who had been there a whole semester before me. They took good care of me and showed me the ropes. I was lucky."

The Annex was built in 1942 and designed to stand four years. When students began living there in 1946, the building already was in poor shape, according to Lufkin resident Jack Irish, who graduated in 1950.

"We were isolated by ourselves out here on the Brazos River bottom, crammed into rooms with 15 to 20 other guys," Irish said. "It was definitely not what we expected."

Bob Conn said he arrived at the Annex one year after Irish and saw the same conditions: a single mess hall, remote shared bathroom facilities and no heating or air conditioning.

"I was a typical 17-year-old coming out of San Antonio. I had never been to the campus of A&M before, so I didn't know what to expect, but the Annex didn't really impress me much in the way of college life," Conn said.

Very few students then had vehicles, so hitchhiking became the preferred way to travel outside of the Annex, Conn said, adding that he remembered being instructed on how to conduct himself while thumbing a ride on Texas 21.

Conn also recalled pranks the men played on each other at the Annex.

"Guys collected syrup from the mess hall and they mixed it with whatever they could find - water or mayonnaise - and used it for a drown-out," he said. "They also did water drown-outs. I woke up a time or two with a bucket of water in my face. It wasn't uncommon to see a line of mattresses drying on the roof."

The Aggies had to schedule their fun around strict study regimens, they all recalled. Each student was required to study from 7 to 10 p.m., and they attended classes and labs Monday through Saturday.

"Studying was difficult because there was no room and we were all crammed in there, but I did well with my grades. I guess there really wasn't anything to do besides study," Johnson said.

The studying paid off for many of the men. The Annex ended up producing more than 4,000 military officers, 18 distinguished alumni, 28 generals, seven presidents of The Association of Former Students and two A&M System regents, officials said.

"There was always a strong bond between those of us who lived out here, and there always will be," said Lee Howard, a retired Air Force lieutenant colonel and 1952 graduate of Texas A&M. "We didn't know what we were doing, but we were determined to become Aggies no matter what it took."

The tallest cliff in the Solar System is one steep drop

The tallest cliff in the Solar System is one steep drop

WH turns focus to getting Under 30 vaccinated

WH turns focus to getting Under 30 vaccinated

Psaki: The fight for voting rights 'is not over'

Psaki: The fight for voting rights 'is not over'

The first phase of the 27-acre gardens, the seven-acre Leach Teaching Gardens, opened in June 2018.

Texas A&M Corps of Cadet members Christopher Simmer, David Kientzy and Nick Gonzales stand ready as Dick Birdwell, from the Texas A&M class of '53, fires the cannon in honor of the four classes of Aggies that lived off-campus from 1950-53.

Ed Richardson, Ran Newman and Glinn White look at a diagram of the Annex Complex on Saturday afternoon at the Texas A&M Riverside Campus.