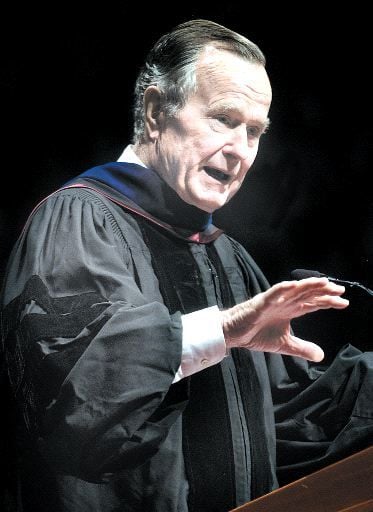 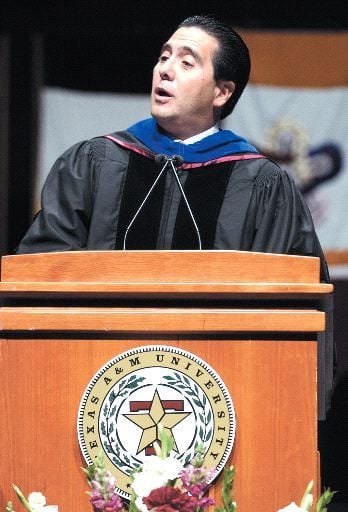 Martin Torrijos Espino, the president of the Republic of Panama and an A&M graduate, and former President George Bush addressed students during two ceremonies Friday in Reed Arena.

A&M has five ceremonies in all for the spring commencement exercises. One was held Thursday, and the last is scheduled for 9 a.m. Saturday. Texas A&M will award degrees to 5,398 students over the course of the five ceremonies, A&M President Robert Gates said.

Torrijos said that life is filled with obstacles and setbacks, but those can be turned into opportunities.

"Realize that A&M has provided you with the tools that a leader requires to overcome adversity and to turn failure into success," he said.

During his time in College Station, Torrijos said, he developed many fond memories that stick with him today and suspects the graduating class will do the same.

"Tomorrow, you may begin to feel nostalgic for friends, professors, for football games and midnight yells, for hamburger and beer at the Dixie Chicken, for Silver Taps and Musters, for the best time of your life," he said. "But what will always be with you is the spirit of Aggieland. Once an Aggie, always an Aggie!"

That Aggie spirit was apparent when three political science majors walked down a Reed Arena hallway. As they laughed and joked and ribbed each other, the three appeared to be the best of friends. But they'd only just met. Though they shared a major, the three never had a class together and met for the first time Friday as they lined up to enter the ceremony.

"This school is unlike anything else," said 23-year-old J.T. Austin. "I never knew these guys before today, and it looks like we're best friends. That's A&M."

As they stood in the hall, they traded phone numbers and promised to keep in touch.

Later in the afternoon, Bush delivered a short speech to his graduates of his namesake George Bush School of Government & Public Service, the Mays Business School, and the colleges of architecture and geosciences.

He spoke for 10 minutes and then left for New Orleans, where he was scheduled to attend a charity function. About a third of his speech was dedicated to a story about starting a life in Odessa with wife Barbara and their only child at the time, George W. Bush. He told the graduates that there's no need to know exactly what they want to do now.

"Let me give you a little early advice. I didn't know what I wanted to be. I knew I needed to get out and make a living, having been in the service and been in school all the time," he said. "But I went west, started a new life, and many, many things have happened since then. So you don't have to know exactly what you want to be when you leave this wonderful campus."

Their first home was in an Odessa duplex. The Bush family shared a bathroom with the neighbors - a 38-year-old mother and her 20-year-old daughter.

"Now this is a family event, so let me simply say that these two ladies had a steady stream of male friends coming over to see them at all hours of the day, and regrettably the night," he said.

"Did I mention that we shared the bathroom with these guys? But anyway, frequently - this is a true story - our neighbors and their guests would lock us out of the bathroom, inadvertently. And we would have to pound on the door. 'Just a minute!' she would shout back. And out she'd come. She was not a very charming person, but not all together unfriendly, if you know what I mean."

Bush told the students that the point of his story was that their time in that duplex was a "broadening experience."

Bush said he and Barbara had come from cloistered communities in the Northeast, though he'd learned a lot about life during his stint in the Navy.

"[The Navy] was not cloistered, where my eyes were opened and I learned so much about life," he said. "And you're knocking on the door, hoping some lady of ill repute lets you in. Hopefully, you'll get a smoother start in your post-college life."

During his time in West Texas, Bush helped start a YMCA, something he says is one of the most fulfilling things he's ever done.

"We did something positive," Bush said. "We didn't change the world, just a small corner of it. But we helped a lot of great kids by doing it."

He told the students to do something positive.

"We only get one life, so make yours matter. Make it interesting. Stretch yourself. Test yourself. Challenge yourself. And in the process, you'll discover yourself," he said. "Enjoy the ride, but help others along as well."

Benediction to a victory: At chancellor's request, clergy bless Kyle Field prior to Texas A&M win over Alabama

The initial trajectory of Texas A&M kicker Seth Small’s last-second kick Saturday was wrong. Off of his foot, the hooking bid appeared des…

The George H.W. Bush Presidential Library and Museum will reopen Monday after closing in August because of a rising number of COVID-19 cases i…

Texas A&M University is poised to benefit to the tune of $56 million as part of the Texas Legislature’s $3.35 billion funding bill passed …

Marvin L. Adams was nowhere to be found recently when President Joe Biden named him among 30 distinguished Americans who will serve on the Pre…