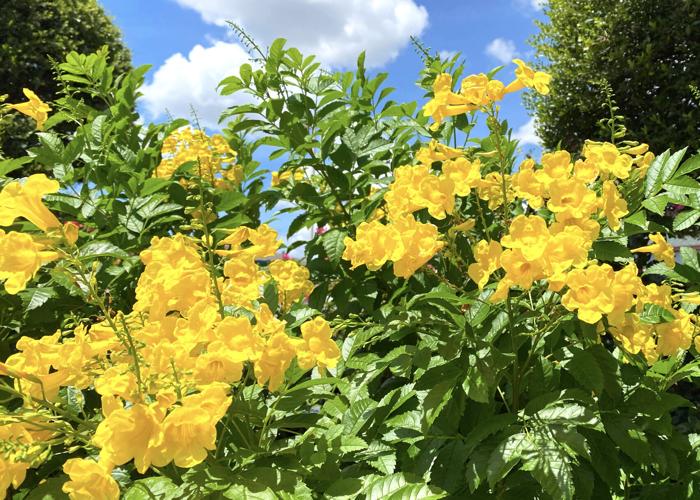 Make sure to plant the correct Gold Star Esperanzas, such as these, as knockoffs are known to be sold. 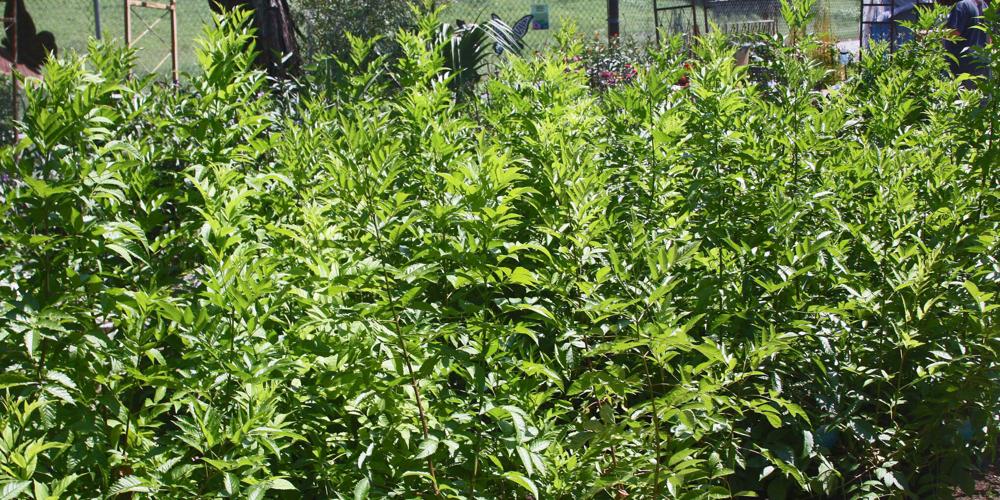 These are knockoff Gold Star Esperanzas. 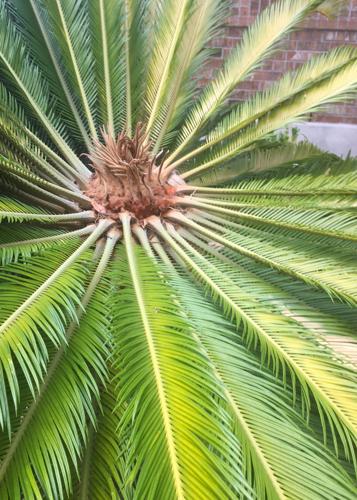 This Sago palm could be suffering from sunscald or spider mites.

Dear Neil: I have planted several Esperanza plants in various places around our yard. All they have done is grow quite tall (10 feet and more). I have tried cutting them down to 3-4 feet, but it didn’t help to get them to bloom. Still no flowers at all, even though they’re in full sun. What can I do?

A: Dr. Jerry Parsons, retired Extension specialist and Prof. Emeritus from Texas A&M has put us on alert a couple of years ago that “knockoff” Esperanzas were being sold. Our mutual friend, Greg Grant, found and developed the original fc known for its fabulous flowers and nonstop blooming habit. Along with Dr. Steve George, also with the Extension Service of TAMU, the three men introduced it to the Texas nursery trade about 25 years ago as a Texas Superstar plant. As such, it must be sold with a tag so noting its status. Those tags are sold with the rooted cuttings, with the small price of the tags being donated back to the Superstar program at the university. However, a few growers sometimes choose to bypass that small additional expense and simply grow their own plants from seeds. By doing so they lose the everblooming habit of Gold Star. It sounds like that’s what you got. I would suggest you visit with the nursery where you bought these. They may have bought them from a source that either didn’t understand or that willingly bypassed the rules. Be sure next year that you (a) buy plants that are tagged Gold Star Esperanza and (b) are in bloom at the time that you buy them.

Dear Neil: What is happening to my sago palm? The leaves start turning pale. Then they droop, and eventually they fall off and the plant dies. Help!

A: Sago palms are normally pretty durable. I do not see any evidence of cycad scale, the most common invader. When it’s present, it’s ugly and obvious. I’m assuming you haven’t let your plant get dry to the point of no return at some time in the past? That leaves me with two possibilities: The plant looks like it might be suffering from sunscald — perhaps from being moved from a shaded location into more sun than it could tolerate. And finally, spider mites are fond of sago palms. They will attack from the backs of the leaves, but they are almost microscopic. Thump one of the discolored leaves over a clean sheet of white paper. If spider mites are present they will fall to the paper and start moving around. You can control them by applying an insecticide that also is labeled for mites. Spray it on both the top and bottom leaf surfaces.

Dear Neil: Recently you advised a gardener to prepare soil for next spring’s vegetable garden by applying glyphosate to kill existing grasses and weeds. In light of court findings that it is causal to development of leukemia, should you continue suggesting its use? Could you not advise using vinegar or some non-carcinogenic product instead?

A: I’ve been asked this more than once. As the son of a Texas A&M herbicide research scientist who spent a significant part of his career studying claims made by companies as they sought government labels for new herbicides, I have followed this case with interest. After the court settlement you mentioned was made, the EPA later (February 2020) published this detailed finding: epa.gov/ingredients-used-pesticide-products/glyphosate in which they stated “EPA continues to find that there are no risks of concern to human health when glyphosate is used in accordance with its current label.” I encourage you to read it.

As far as recommending vinegar for preparing garden soils or just as a general weedkiller, I do not care to do so. I don’t think it works, at least not as well as I would expect it to if I were asked to write or talk about it positively in this kind of setting. It burns foliage, but it does not offer good long-term control of aggressive perennial grasses such as Johnsongrass or bermudagrass, two common invaders of garden spaces. They come back quickly and strongly.

I am comfortable with my recommendation of glyphosate sprays. Unless university or EPA research shows them to be of health concerns, I will continue to list them as an alternative for gardeners. Those who choose not to use them might consider solarizing by covering the new garden area with black plastic film for a few months during the growing season to kill out the existing vegetation. They can also follow that up with roll-type mulches between rows of vegetables post-planting.

Have a question you’d like Neil to consider? Mail it to him in care of this newspaper or e-mail him at mailbag@sperrygardens.com. Neil regrets that he cannot reply to questions individually.

Poppies are the perfect cottage garden plant as they definitely understand the old advice of “bloom where you are planted”, or in their case, …

Dear Neil: My monkeygrass browns many summers but it never has done it this badly. What caused it to do this?

Dear Neil: We need some help identifying and controlling this wild growth. It originated where we had a non-producing pecan cut to the ground …

Area landscapes are recovering from the summer heat and drought. Most parts of our area have received some rain, which has rejuvenated our law…

New study: Lack of sleep may harm your immune system

Ice baths may burn body fat, according to a new study

Ice baths may burn body fat, according to a new study

How to transition your skincare routine from summer to fall

How to transition your skincare routine from summer to fall

Make sure to plant the correct Gold Star Esperanzas, such as these, as knockoffs are known to be sold.

These are knockoff Gold Star Esperanzas.

This Sago palm could be suffering from sunscald or spider mites.