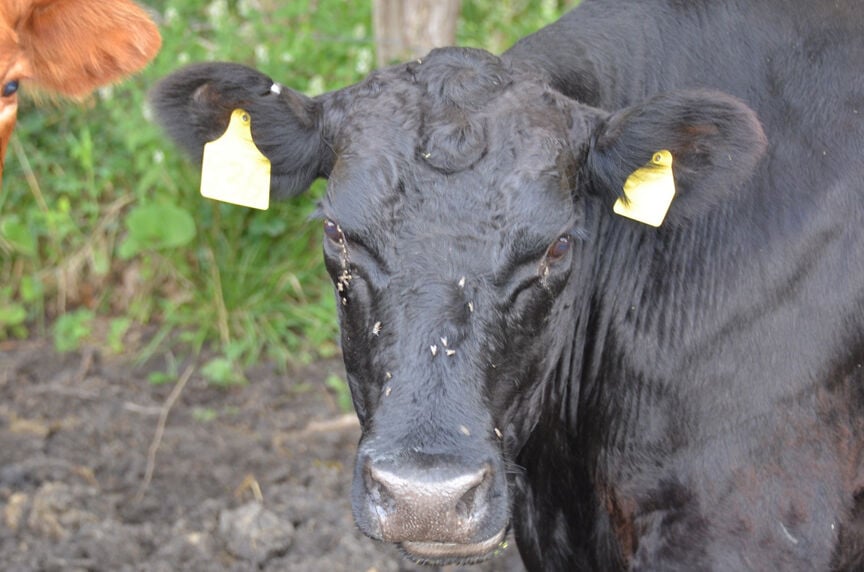 Face flies feed on an animal’s mouth, muzzle and wounds. 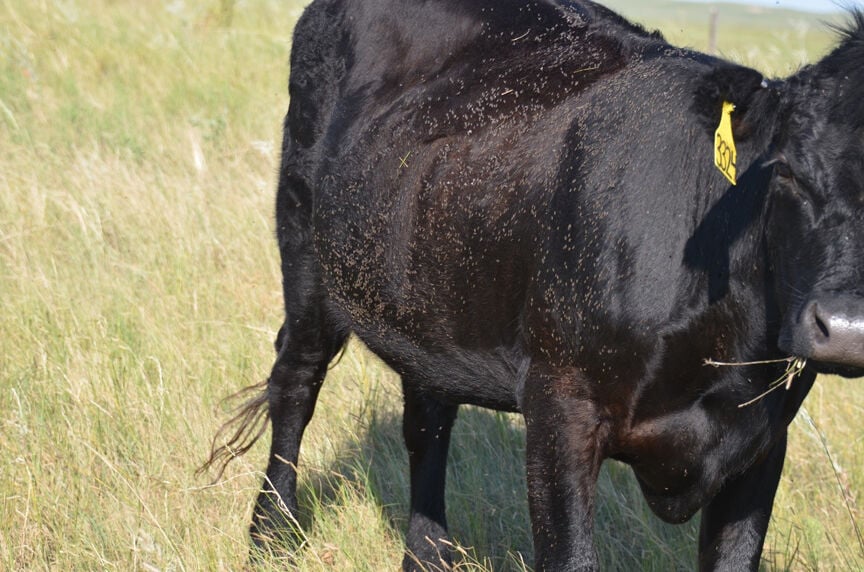 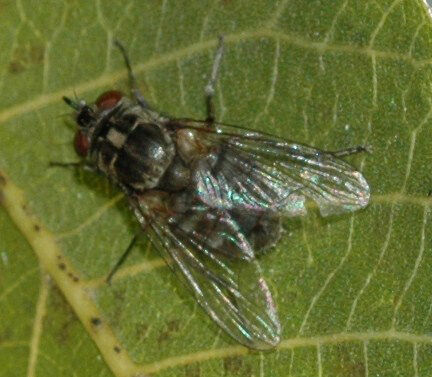 Stable flies are the cattle industry’s most costly pest. 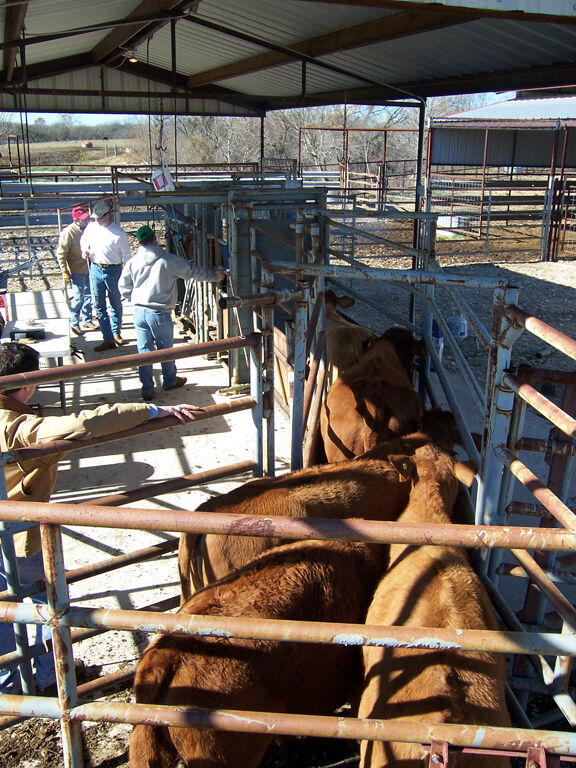 “Annual economic losses caused by horn flies have been estimated at 1 billion dollars in the United States,” said Dave Boxler, University of Nebraska-Lincoln. “Research studies have shown that calf weaning weights are negatively impacted from 4 to 15 percent. Horn flies can have a negative impact of 18 percent on weight gains of stocker cattle and replacement heifers. In addition, horn flies can spread summer mastitis.”

“Adult horn flies have piercing mouthparts and feed on blood 30 to 40 times per day,” said Sonja Swiger of Texas A&M AgriLife Extension Service. “Their bites form a wound that mars animal hides. Horn fly populations increase from late spring to early fall and peak in midsummer. They rest on withers, back and sides of cattle, moving to the belly when temperatures exceed 90 degrees F. Cattle react to the flies by licking their backs, twitching their flanks, switching their tails and kicking at their bellies with their hind legs. Adult flies lay eggs under the edges of fresh dung pats where they hatch in 10 to 20 days, depending on temperature.”

Monitor weekly for horn flies throughout the fly season between 8 a.m. and 11:30 a.m. when flies are usually located on the upper portions of the animal’s body. When the economic injury level of 200 flies per animal is reached, treat animals either with back rubbers (oilers), dust bags, insecticide ear tags, pour-on products, oral larvicides (IGRs), low pressure sprayers, mist blowers or the VetGun.

“Back rubbers and dust bags are usually an effective way to reduce horn fly numbers if cattle are forced to use them,” Boxler continued. “Insecticide ear tags are a convenient and effective method of control if applied during fly season. Use two tags on adult cattle and one on calves to obtain the desired level of control. Animal sprays, mist blower applications and pour-on products provide only seven to 21 days control and as a result, retreatment is required throughout the fly season.

IRGs administered in feed or mineral mixes prevent fly larvae in manure pats from developing into adults. An important success factor with oral larvicides is steady consumption. A complicating issue is horn fly migration from neighboring untreated herds. The VetGun applies an individual insecticide capsule to an animal with a device similar to a paintball gun. This application can provide horn fly control for 21 to 35 days.”

Boxler described the face fly as nonbiting and resembling the house fly. It feeds on an animal’s mouth, muzzle and wounds. In addition to annoying cattle, face flies transmit the causal agent of pinkeye. Since face flies are on animals for only short time periods, the best control methods are those that facilitate insecticide contact on a daily basis such as a dust bag, oiler or ear tags.

“Stable flies are the United States cattle industry’s most costly pest,” said Swiger. “They look like house flies, but are smaller. Their proboscis [mouthpart] protrudes bayonet-like in front of the head and inflicts a painful bite. Stable flies suck blood only once a day and rest on nearby surfaces after feeding. They attack legs, sides, back and belly of cattle. When attacked, animals will stomp, kick and switch their tails. They will also bunch in a group as a means of defense, which keeps them from dissipating excess heat in hot and humid weather.”

“These flies hatch in spoiled or fermenting organic matter mixed with animal manure, moisture and dirt,” Boxler said. “Sites around hay rings are often a source of stable fly development throughout the summer. These flies can move at least 10 miles or more and can travel from nearby feedlots, dairies or other cattle confinement areas and attack cattle on pasture. Where cattle are confined, stable flies can develop around feed bunks, along the edges of feeding aprons and under fences. They can also develop along stacks of hay, alfalfa, straw, grass clippings and poorly managed compost.”

The best method of killing adult flies is weekly insecticide sprays using a low-pressure sprayer or mist blower. Sanitation by removing wasted feed or treating feeding areas with a larvicide such as Neporex can reduce localized fly development, but may not totally reduce the economic impact. The economic injury level is two to five flies per leg.

“Female heel flies lay eggs on legs and lower body of cattle which causes them to run wildly with their tails in the air [gadding] or stand in water to protect themselves," Swiger said. "The eggs attach to animal hair and hatch into tiny larvae [grubs] that penetrate skin and migrate though the animal’s body. Larvae congregate in either esophagus or spinal column tissue, but eventually move to the animal’s back in late summer, fall or winter. Grubs develop a cyst [warble] just under the skin on the animal’s back. After six to eight weeks, grubs cut holes in the hide, emerge, fall to the ground and pupate. Adult heel flies emerge in late winter, spring or summer.”

As grubs move through and out of the animal, they ruin the hide, reduce carcass trim and lower meat quality. Cattle grubs are controllable once they reach the animal’s back, but by then, most of the damage is done. As a result, prevention is preferable over therapeutic treatments. Applied systemic insecticide sprays, dips, pour-on products, boluses and injectables are absorbed into the animal’s body where they destroy cattle grubs on contact.

“Female horse flies and deer flies are vicious biters and are a serious nuisance to livestock,” said Swiger. “In addition, these flies can transmit anaplasmosis, anthrax and other diseases. They are primarily found in damp, brushy or low-lying areas near creeks, streams and tanks. The horse fly measures 1/2 to 1 1/2 inches long and the deer fly is generally 1/4 to 1/3 inch long.”

Horse fly and deer fly females can lay as many as 800 to 1,000 eggs at a time. They mostly lay on vegetation near a water source but some lay eggs in dry soil or leaf litter. Female flies are not easily deterred or dislodged from an animal. Heavy attacks can reduce animal weight gain, milk production and feed utilization as well as damage the hide. Only females obtain blood meals whereas males feed on plant nectar.

“Controlling these two flies is difficult because several species feed at different times and they generally feed for only four minutes. No insecticides kill the larvae or pupae,” Swiger said. “Moving livestock from infested areas may provide some relief, and box and canopy traps can limit the number of adult flies in an area. Ladybird beetles feed on the eggs, whereas wading birds and dragonflies feed on the larvae. Certain large solitary wasps attack adults and parasitoid wasps raise young on various reproductive stages of horse and deer flies.”

Lettuce losses could cause shortage across U.S.

If you’re new to farming or ranching, access to capital is one of your biggest needs, whether it’s to purchase property or equipment or to meet operating costs. USDA offers a variety of loans, which can help producers start or grow their operations.

A group of Texas A&M AgriLife faculty are establishing a rural veterinarian network to provide education and assistance with a goal of making rural veterinary practices sustainable.

Face flies feed on an animal’s mouth, muzzle and wounds.

Stable flies are the cattle industry’s most costly pest.