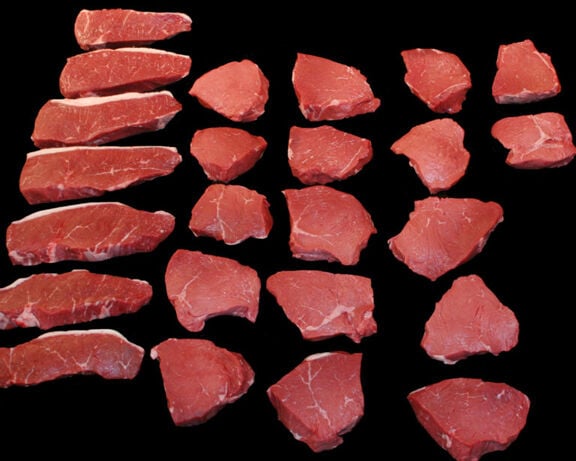 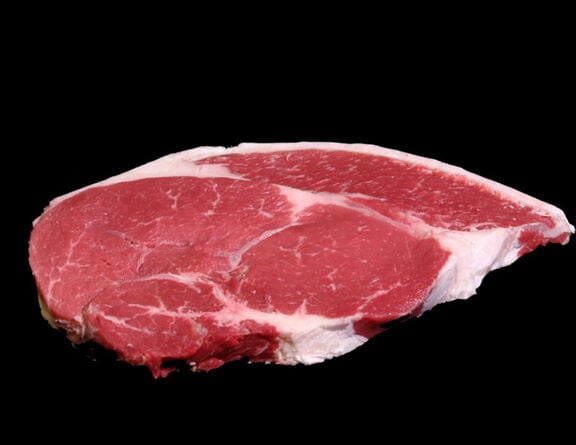 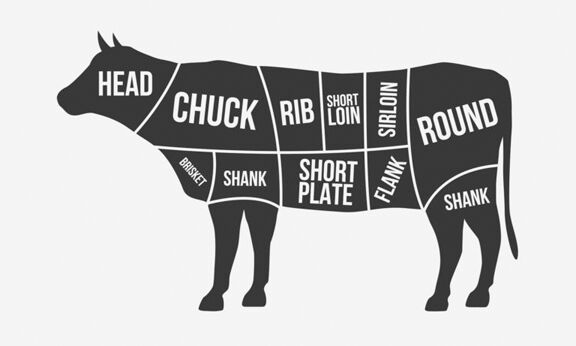 Chuck flap, rib-eye filet, tomahawk steak, Denver or Sierra cuts, flat irons and tri tips — the landscape of the local grocery meat case is changing when it comes to beef cuts, according to a Texas A&M AgriLife Extension Service expert.

As the COVID-19 pandemic brought beef shortages, consumers may have noticed some different cuts of beef when their traditional selections were sold out, said Davey Griffin, AgriLife Extension meat specialist in the Department of Animal Science of Texas A&M University. Perhaps they were even hesitant to purchase because they were unfamiliar with how to prepare these cuts.

Griffin said the recent crisis might have spotlighted the changing supermarket offerings, but these newer beef cuts have been available for some time and are starting to gain popularity with chefs and others across the nation due to their reasonable cost and flavorful eating experience provided.

The North American Meat Institute’s Meat Buyer’s Guide outlines all the beef cuts. The chuck, rib, loin and round are some of the major primal cuts familiar to consumers, with the brisket, plate, flank and foreshank being the traditional minor cuts.

Breaking down a beef carcass, Griffin said, results in one-third trimmable fat and bone and another 20-25% in trimmings for ground beef and pizza toppings. The middle meats, where the higher-value steaks come from, account for 10-12% of the carcass but one-third of the value of the whole carcass.

“The rest of it is the other muscles, and those are the ones we are trying to utilize more — enhance the value because they are the lower-cost muscles that still provide an excellent quality beef cut for consumers,” Griffin said.

Over the past 10-15 years, the industry and Texas A&M started identifying those muscles that could be used to produce other affordable cuts.

“Enhancing the value of cuts from the chuck and round not only helps consumers have a great moderately priced eating experience, it also increases the overall value of the carcass,” Griffin said. “That also has potential to add to the value of live cattle.”

“We know these cuts are changing to meet the changes of consumers,” Griffin said. “Over the years the size of families have grown smaller. They aren’t cooking a great big roast or porterhouse steak anymore.”

The chuck is being broken down differently, providing new cuts more targeted for different cooking and eating experiences, he said.

“The second-most tender muscle in the beef carcass comes from the chuck and is now being merchandised as a mid-priced flat iron steak,” Griffin said. “It was just in a chuck roast. Now we’ve pulled it out, and it is a menu item at restaurants. It has enhanced the whole value of the carcass and provided the consumer an affordable eating experience.”

The petite shoulder tender also has become overwhelmingly popular with chefs, and ranch steaks have a nutritional value close to a boneless, skinless chicken breast, he said.

“There was a while in there that some of this was attempted and retailers couldn’t get much movement on some of the newer cuts,” Griffin said. “Now, with newer customers and those willing to try new things, they are starting to get movement, and customers are having good experiences and are willing to try them again.”

He offered a breakdown of new offerings from the four primal cuts:

The traditional chuck rolls are now cut into chuck-eye steaks, chuck-roll roasts, Denver and Sierra steaks, and the chuck flap.

The loin section now yields the short loin or tenderloin. “We don’t see as many T-bones and porterhouse cuts anymore,” he said. Strip or top loin steaks and tenderloin steaks are more common now.

The round traditionally would have been round steak. Now it is broken down into sirloin tip steak, top-round steak, eye-round steak and bottom-round steak. Other cuts are flank steak, skirt steak and inside skirt — all used in fajitas. The bottom sirloin flap is also used for fajitas.

“The traditional way of cutting the sirloin is to make whole sirloin steaks,” Griffin said. “But we don’t really see those at all anymore. The muscle fibers in the center of a sirloin steak run a little different than the cap. So, they have been taken apart and sold as top sirloin steaks, cap steaks and center cut sirloin steaks.”

The smaller size, he said, means it can be cut pretty thick, making it easier to cook to the right degree of doneness. The bottom part of the sirloin is the sirloin ball tip, tri-tip and flap.

“Tri-tip is used a lot in other regions of the U.S., and we are starting to use it more in Texas, because you can cut across the grain and make those cuts more tender,” Griffin said.

Ordering up your own beef cuts

Griffin said because of these new cuts, sometimes individuals who raise their own beef and take it to small processors don’t always get back what they were expecting.

“I’d get calls from guys who said the meat cutter stole all of my T-bones,” he said. “But when I’d ask if they got certain other cuts, they’d say ‘Yes’. You can’t have both out of one side of beef. You have to understand how the cuts are made.”

Knowing the newer cuts and where they come from helps to understand why the expected porterhouse steaks or racks of ribs are not in the beef packages when they are picked up after processing, he said.

Cattle have only 13 ribs, and they can be cut into several different retail/food service cuts, Griffin explained. For instance, chuck short ribs are cheaper than the counterpart ribs from the plate but contain the same flavorful muscle. Back ribs are less meaty, come from underneath the rib-eye roll and are less expensive.

“The chuck short ribs are used a lot for export, but they are otherwise cheap on the market because of the barbecue influence,” he said. “If you want to receive the plate short ribs, you can’t do a tomahawk steak, so you have to pick one or the other out of a side of beef.”

Other producers going to smaller processors who are still making the bone-in cuts using band saws and not really trimming out the muscle — cuts like we had in the 1960s — wonder, “How can I get my guy to cut these new cuts,” Griffin said. All processors know where those muscles are, it just costs more and takes longer to do, so it is a matter of asking and paying for it.

Griffin’s advice for consumers with beef to process in the future is to discuss with the butcher/processor what you would like to have. His advice to processors is “be prepared because that’s how the consumer is eating today. The muscles haven’t changed, but we are using them in smaller, more utilizable pieces for the consumer.”