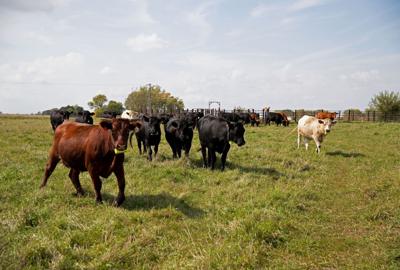 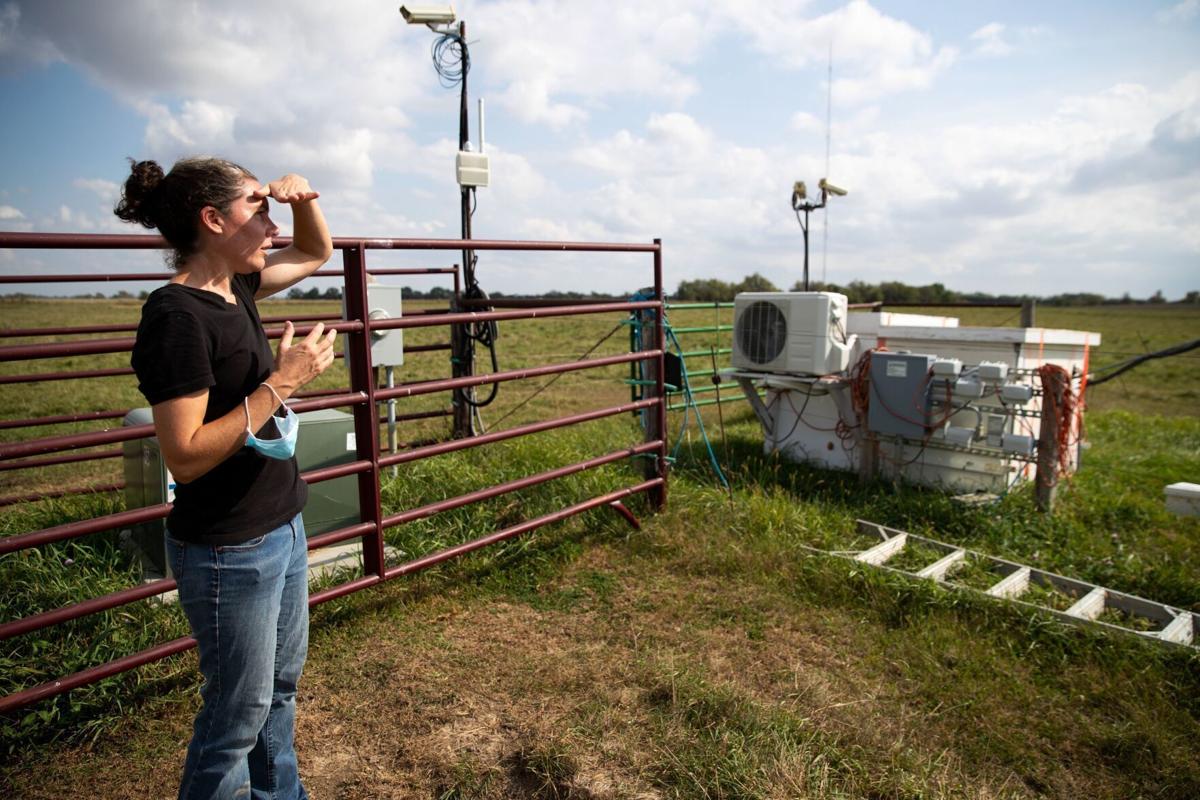 UNL animal scientist Andrea Watson looks at the Eddy Covariance Tower, which measures the methane and carbon dioxide fluxes in the pasture system, at Eastern Nebraska Research and Extension Center, in Ithaca, Nebraska. 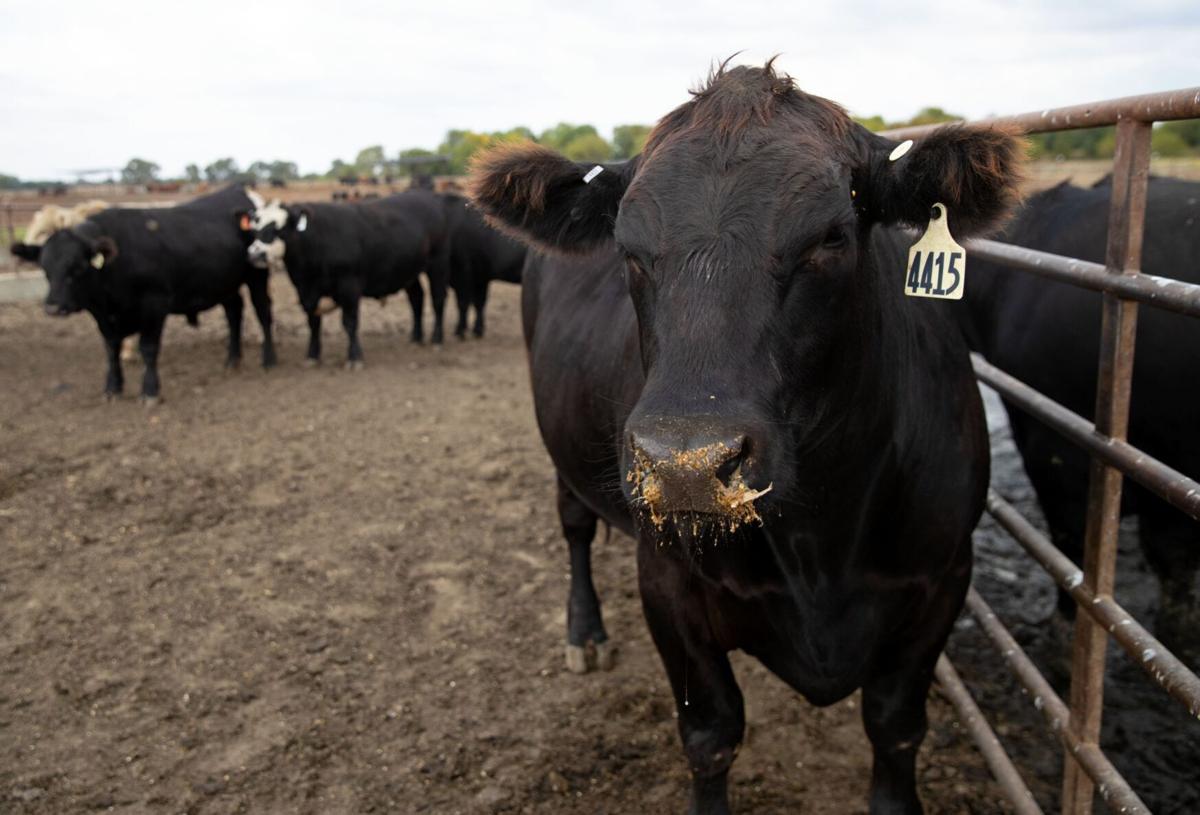 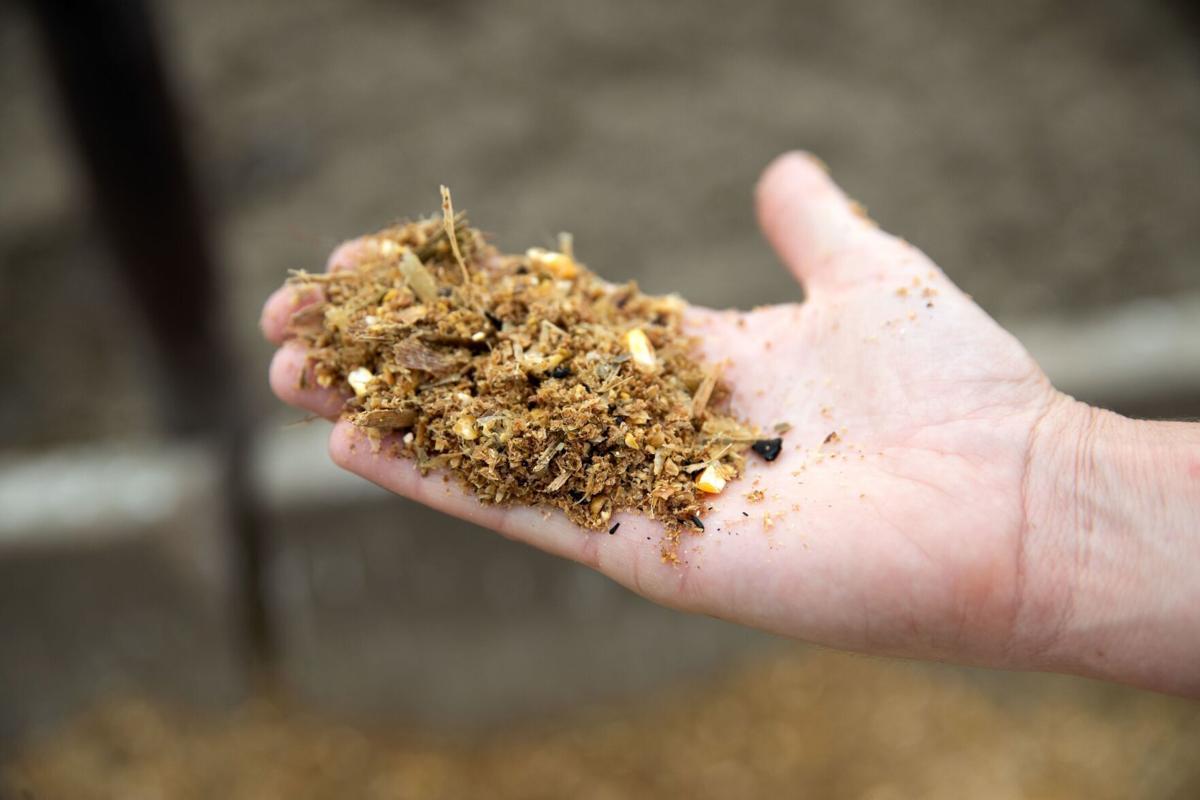 ITHACA — In what’s been dubbed the “methane barn” at a University of Nebraska-Lincoln agricultural research center near here, sensitive electronic equipment monitors and logs the amount of gas belched out by a herd of yearling steers.

Yes, Andrea Watson and her fellow UNL scientists are studying cow burps. She has already heard all the jokes.

“My brother especially thinks it’s funny I had to get a Ph.D. to study cow manure and cow burps,” she said.

But this work is really quite serious. If it can help reduce the beef industry’s global environmental hoofprint, it could one day help save the planet. And in the process, it could also help preserve Nebraska’s biggest, most important agricultural sector.

Cattle and cattlemen, long villainized in the worldwide climate debate, now have a chance to be part of climate solutions.

As changing weather patterns and extreme weather events increasingly awaken the world to the need to confront global climate change, an urgent drive is on to slash the volume of Earth-warming carbon sent into the atmosphere each year. And in that focus on emissions, cattle are taking their share of heat.

Consider that in a year, the average cow belches out 220 pounds of greenhouse gas. According to United Nations figures, if the world’s beef and dairy cattle were their own country, they would be the third-largest emitter, after only China and the United States.

Consider that the primary carbon emission from cattle is methane, a potent greenhouse gas that warms the climate 28 times more than carbon dioxide.

And consider that in addition to such direct emissions, the growing appetite for beef in developing countries is leading to the destruction of millions of acres of rainforests, depleting those vital ecosystems that pull tons of carbon dioxide out of the atmosphere.

That’s why the World Resources Institute has suggested Americans should slash their beef consumption in half. Bill Gates earlier this year went further, suggesting wealthy countries like the United States should move to 100% synthetic beef to avoid a climate disaster.

“The real question is how the heck in the next 30 years do we avoid cooking the planet irretrievably,” said Tim Searchinger of the World Resources Institute.

Nebraska beef producers say such dietary shifts would amount to an economic disaster in this state, where cattle outnumber people more than 3-to-1 and beef production underpins the entire agricultural economy. In the climate debate, they believe beef has been getting a bum steer.

As the world drives to reduce emissions, beef producers say they’ve already been doing so. Due largely to gains in efficiency that were unrelated to the climate crisis, the U.S. beef industry is producing more food today than it was in 1975, but with 29% fewer cattle.

“Trying to blame the cow industry for any of this is BS,” said Jay Wolf, an Albion, Nebraska, cattle rancher who definitely is familiar with real BS. “We have reduced the herd by one-third. When other sources reduce by one-third, come talk to me.”

Producers and some scientists also question whether assumptions used in warming calculations have overestimated beef’s contribution to climate change.

Nonetheless, looking forward, producers and climate scientists are finding some common ground when it comes to reducing methane emissions from cattle. In August, the nation’s largest and oldest producer organizations pledged to show climate neutrality by 2040, a goal that would require cuts to cattle methane emissions.

That’s where the young steers in UNL’s methane barn could come in. They are part of an experiment exploring whether feed additives can reduce the amount of methane cattle burp out. Such experiments elsewhere have shown that significant reductions are within reach.

Climate scientists say what’s most exciting about cutting cattle emissions is that due to the unique properties of methane — not only its super warming power, but also the fact the gas is relatively short-lived in the atmosphere — there is potential to produce fast and immediate climate impact.

Climate experts are increasingly recognizing that in the decades-long battle ahead, reducing methane emissions from all sources is crucial to helping the planet buy time and avoid catastrophe. Cattle can play a big role in that, said Joe Rudek, lead senior scientist with the Environmental Defense Fund.

“Methane’s impacts are higher, but it also means reductions are more significant,” he said. “We can really slow the rate of warming over the next couple of decades if we really get on top of methane quickly.”

So often, the cattle industry has been portrayed as a climate change liability, said Frank Mitloehner, a professor of agriculture and air quality at the University of California-Davis. He said cattlemen can change that if they embrace the climate change opportunity before them.

“Methane mitigation is powerful, and that’s what makes our livestock sector so important in this discussion,” said Mitloehner. “We have an opportunity in animal agriculture to be part of the climate solution.”

UNL animal scientist Andrea Watson looks at the Eddy Covariance Tower, which measures the methane and carbon dioxide fluxes in the pasture system, at Eastern Nebraska Research and Extension Center, in Ithaca, Nebraska.