By knowing your roots and soils as well as you know your pastures and fences, you can more effectively manage your land. 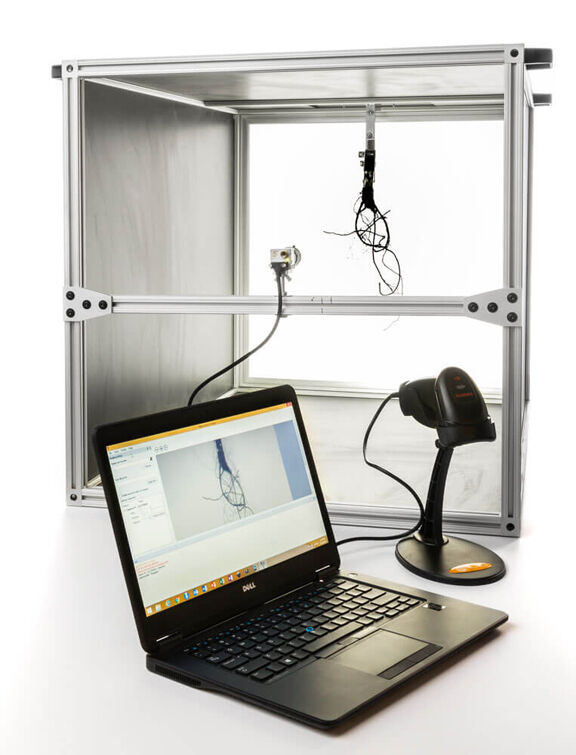 RhizoVision, developed in the laboratory of Larry York, allows researchers to visualize and study the intricacies of root structure. 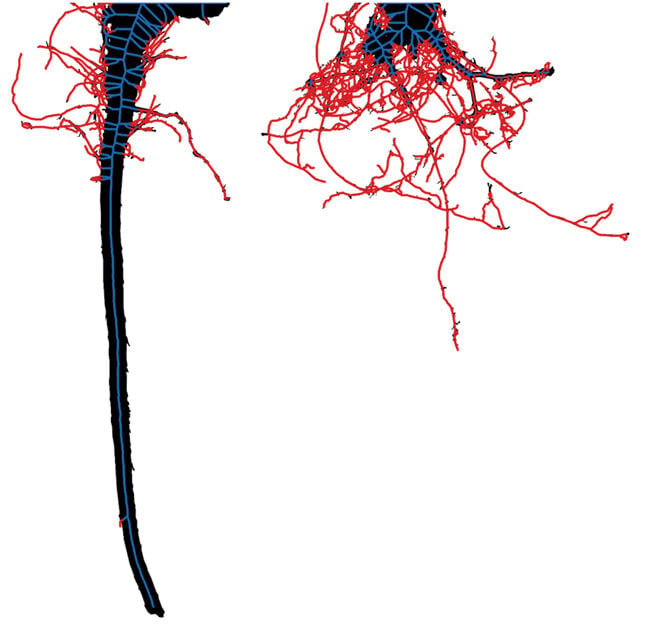 These alfalfa roots are from a field infected with cotton root rot at Noble’s Red River Ranch in Burneyville, Oklahoma. The root on the left was taken from an area with no disease, while the root on the right was a survivor from a diseased area. 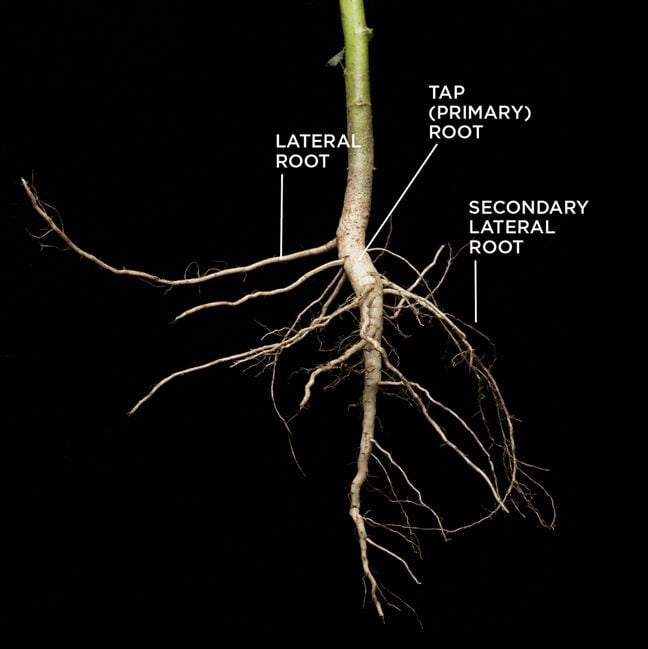 We all know roots are important to the plant, even if we don’t always see them and a lot of what they do remains hidden. In our work at Noble Research Institute, we see that producers are interested in learning more about roots.

There are some good ideas out there, but there are also some misconceptions. Here we’ll do some myth-busting based on common questions and ideas encountered with producers.

Myth 1: Balls of roots are always good when you pull up a plant.

All else being equal, we can say that more roots are better. However, all else is not equal, and there are negative reasons why plants might produce extra roots. First, roots are costly to the plant — 50% of the sugar the plant makes from photosynthesis is typically used for root construction and maintenance. Therefore, it’s very important that plants balance giving just the right amount to building the right size and shape root system to drive plant growth. Fact is, if a plant only invested in roots and not leaves, it would not live very long. As mentioned, there are negative reasons that roots might proliferate. For example, it’s well known that roots proliferate to scavenge for water and nutrients. Therefore, prolific root systems may indicate soil or plant deficiencies that may actually be limiting plant growth. If a main root is damaged by disease, worms or insects, it often has more lateral (or branch) roots.

Myth 2: You can’t pick good roots when selecting a forage to plant.

How roots might improve the soil for more regenerative ranching is a great research frontier. We typically expect bigger shoots to have bigger roots, just like you’d expect a tall person to have longer legs. As mentioned, the plant must balance investment to the roots, and when water or nutrients are limiting, the plant will typically invest more in roots. This is where science and management can come in. Varieties bred to thrive in growth-limiting environments or management practices, such as rotational grazing, that lead to greater overall shoot growth will also generally lead to greater root growth with multiple benefits to the soil. In the case of fields or pastures with hardpans, some research shows that species with thick, dominant tap roots, such as chicory or okra, may help to bust up that pan and allow greater water infiltration at depth.

Myth 3: There are only tap-rooted and fibrous root systems.

This is a bit of a misconception. In fact, all plants that grow from a seed initially have a tap root.

This is the root that first emerges from the seed before the leaves do, and is known as the radicle or the primary root. In most species, this root can grow deep as long as it doesn’t become damaged or die. The element of truth in this myth is that many broadleaf plants have a large, prominent tap root. Carrots are an extreme example, but this is also true for alfalfa, dandelions, beans and okra. In general, it may be that the thicker the tap root, the deeper it grows — but that’s not always true. Many grasses, including bermudagrass or fescue, and cereals like wheat, are described as having fibrous root systems because the tap root is small and there are many other thin roots that look like a mat. However, many varieties or species may be somewhere in the middle, like sunflower that has a fairly strong tap root but also many fine roots near the base of the tap root. Therefore, we encourage you to look a little harder and consider descriptions like a strong or weak tap root and the degree of lateral branching or fine rooting.

Myth 4: Root hairs, hairy roots and all roots are the same.

The lateral roots of most plants tend to be very fine, or of small diameter. In fact, as one lateral can emerge from another lateral, it may become even finer. Depending on the degree of branching, the species and even the specific variety, these fine roots can seem as fine as human hair, though they aren’t really. This has led to descriptions like “hairy roots” or “root hairs.” This labeling is confusing because the term “root hairs” actually refers to subcellular appendages that can stick out from the root surface (epidermis) and serve to anchor roots to soil particles even at the microscopic level. These true root hairs on some roots are barely discernable as a fuzz, like on a peach, though they typically break off when removing from soil. The International Society of Root Research has tried to avoid some of this confusion by defining four major root types: the tap root, shoot-borne roots, basal roots and lateral roots of other roots. Basal roots are those that form above the seed but not on the shoot. Therefore, the term fine roots to describe laterals of fine diameter may cause less confusion than hairy roots that may incorrectly be associated with root hairs.

Myth 5: It’s better to plant so each plant has room versus crowding plants together.

Some producers worry about planting seed mixtures because of overcrowding. Plant competition is definitely an important consideration in cropping systems or introduced pastures. Seeding rate is a major determinant of overall forage yield, where yield typically increases as seeding rate increases and then plateaus before eventually falling off as competition becomes too great. On the other hand, the concept of species complementarity suggests that by mixing plants with different forms and time of activeness (for example, between cool-season die-off and warm-season growth), the overall performance of the ecosystem is improved. Below ground, there is evidence that some roots can occupy the more shallow area, while others use the deeper soil layer so that the overall soil is better explored. Some species may also use different sources of nitrogen and phosphorus. Therefore, even as the same seeding rates, mixtures may actually have less competition and perform better than their monoculture counterparts, with numerous other benefits. A great continued frontier of study in grazing systems is to understand how native grassland systems work, and whether competition and complementary growth can provide insight into management of both native and introduced pastures.

Our tip for producers is to keep wondering and keep digging. Many plant biologists have the same misconceptions about less-studied roots. By knowing your roots and soils as well as you know your pastures and fences, you can more effectively manage your land.

By knowing your roots and soils as well as you know your pastures and fences, you can more effectively manage your land.

RhizoVision, developed in the laboratory of Larry York, allows researchers to visualize and study the intricacies of root structure.

These alfalfa roots are from a field infected with cotton root rot at Noble’s Red River Ranch in Burneyville, Oklahoma. The root on the left was taken from an area with no disease, while the root on the right was a survivor from a diseased area.