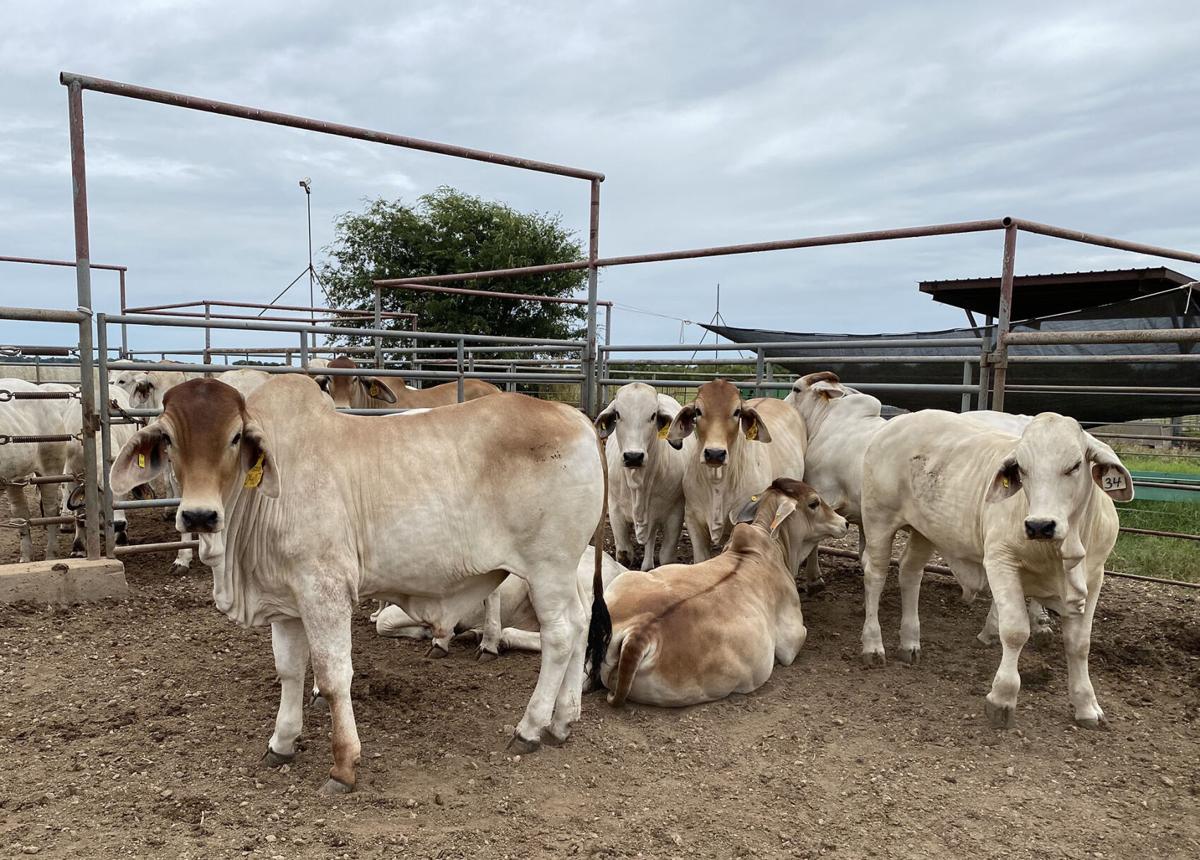 Brahman steers near the conclusion of the finishing phase are in a pen at Bryan-College Station facilities. 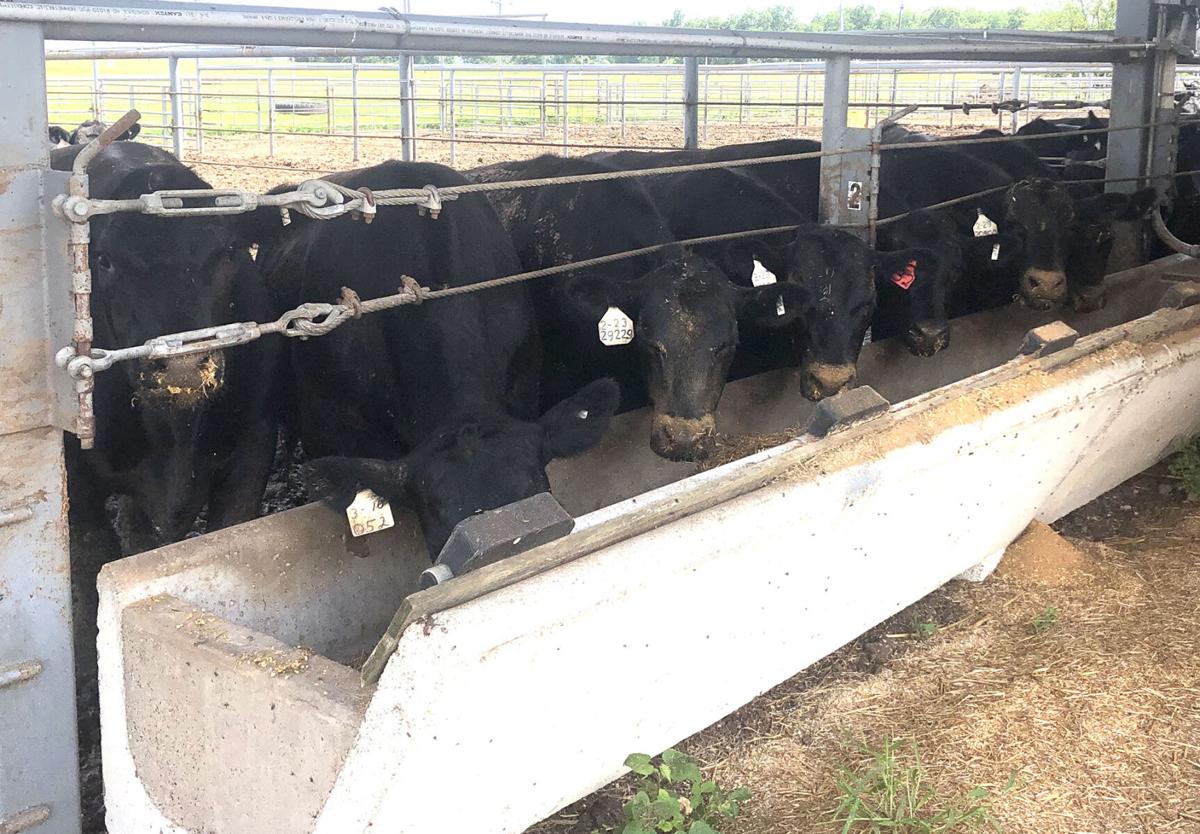 Angus steers at the Texas A&M Department of Animal Science Beef Cattle Systems Unit are adapting to feed and the feed bunk prior to initiation of the feedlot phase data collection. 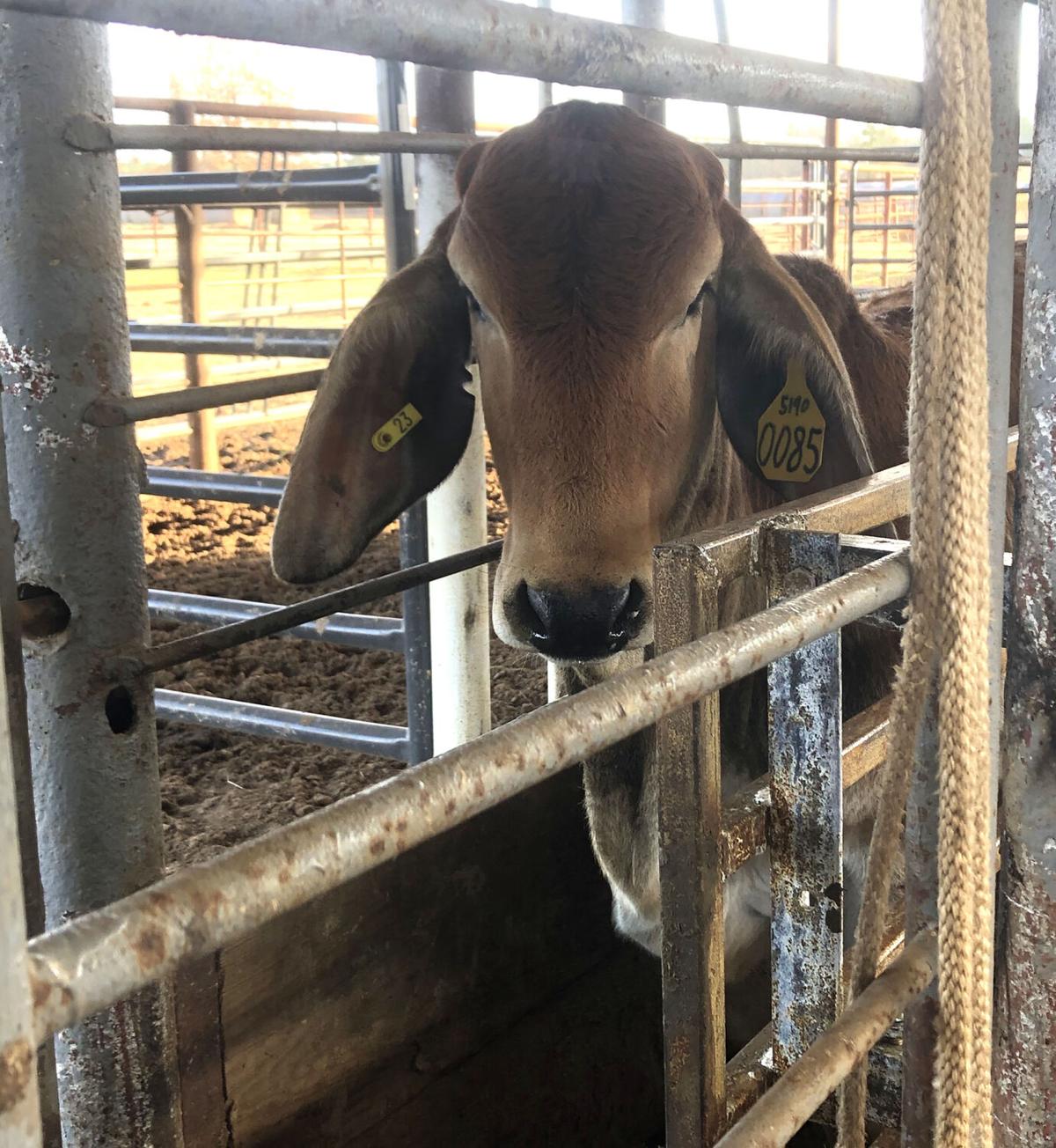 A Brahman steer at the beginning of the grazing period at Overton.

Incorporating Brahman genetics into beef cattle herds amid changing environmental temperatures in the southwest has one Texas A&M AgriLife team researching the physiological differences in cattle breeds and temperament to enhance beef quality from these heat-tolerant cattle.

To address the biological basis of this economically relevant issue for beef production across Texas and southeastern states, White-Springer and Welsh developed a collaborative team from across the Texas A&M University System. Other team members in the Department of Animal Science include David Riley, a geneticist, and Penny Riggs, a molecular geneticist.

A three-year $500,000 U.S. Department of Agriculture National Institute of Food and Agriculture grant will help them study skeletal muscle energetics at the cellular level to determine how live animal mitochondria, or the “powerhouse of the cell,” are related to meat quality.

The team will delineate within Angus and Brahman steers how temperament and mitochondrial energetics are interrelated. The project, “Enhancing Sustainability and Profitability of Tropically Adapted Beef Cattle Utilizing a Novel Skeletal Muscle Energetics Approach,” aims to identify physiological factors that may lead to economic advantages for beef cattle producers.

“Our goal is to be able to identify testing procedures that can help producers make economically viable decisions about future management of an individual bull, heifer or steer earlier in the production cycle,” White-Springer said.

“Our team’s members believe that collaboration increases the depth of an investigation, and extends the impact of the research,” Welsh said. “Our multidisciplinary research project also provides graduate students valuable experiential learning opportunities.”

Can meat quality be determined by muscle energy?

Energetics is the study of how the mitochondria make energy in the muscle, White-Springer said. The questions they will answer with the study are:

Do the mitochondrial profiles of energy production relate to meat quality, and if so, do we need to manage these animals differently?

Is temperament related to meat quality via alterations in energetics?

“Energy comes from the muscle cell’s mitochondria, and within the mitochondria, there are different protein complexes of electron transfer,” she said. “We can quantify the activity or capacity of each of those complexes.”

White-Springer said depending upon which biochemical complex an animal relies for energy production, there may be different outcomes related to consumer preference, such as meat color or tenderness. Utilizing one protein complex over another may allow the animal to better produce energy without producing toxic byproducts to muscle cells, such as reactive oxygen species. The toxic byproducts may lead to reduced muscle growth or lesser meat quality at harvest.

The efficiency of how the mitochondria move electrons through the complexes of the electron transfer system then may have implications for what we call production, and that production is different depending on which animal is being considered.

“And so, we can study the mitochondria in each of these species to determine their efficiency. How are they making energy and how does that impact whatever our end product is for that animal?”

Meat quality is influenced by genetics and breed type.

“This study is designed to see if there is a physiological reason such as muscle energetics or temperament for that,” White-Springer said.

The study is using specifically purebred Angus and Brahman cattle. Angus are a desirable breed for meat quality whereas Brahman cattle often are discounted due to a negative perception regarding their temperament and lower quality carcass.

The study has three primary goals:

To determine the ability to use a physiological marker in live animals to predict meat quality.

To identify the role of mitochondrial bioenergetics in animal production.

To prevent Brahman cattle from being discounted at slaughter, as they currently are. Identification of how to improve the quality of beef derived from tropically adapted breeds is important as the beef industry addresses an increase in global temperatures.

Muscle samples were collected when the animals were about 10 months old, after they recovered from weaning stress, and again at about 13 months of age toward the end of the grazing phase at the Texas A&M AgriLife Research and Extension Center at Overton. The final samples were collected at the end of the feedlot phase at the Texas A&M Beef Cattle Systems Unit in Burleson County, about three weeks before the animals were sent for fabrication at STX Beef in South Texas.

“So, we will actually assess skeletal muscle mitochondrial energetics, hormone concentrations and growth measurements at all of those time points from the live animal and determine their correlation with each other and most importantly with meat quality at slaughter,” she said.

The first step is to determine if mitochondria are related to meat quality, and if they are, whether the animals can be managed differently for better beef quality.

“If they have different mitochondrial profiles when they’re young, do we need to say: He’s not going to make good meat, let’s go ahead and cull him now?,” White-Springer said.

Depending on the outcomes of this study, there are a number of next steps to take, but the long-term goal would be to offer some sort of testing. Right now, White-Springer said a muscle tissue sample must be taken, but researchers hope to find a less invasive method.

“That would be optimal, with the overall end goal to be able to help producers make economic-based decisions concerning feeding out or culling cattle,” she said. “Maybe there will need to be different management practices for those types of cattle that, for whatever reason, their meat quality is destined to be less than desired.”

Angus is a primary breed that the U.S. typically uses for meat production. The Brahman breed is becoming more important, particularly in the southern U.S. and in the southern hemisphere, because of their heat tolerance.

“We’re trying to figure out are the same pathways activated or the same physiological differences we’re seeing in one breed as in the other breed,” White-Springer said. “Are they the same in both, and can we try to find a way to make our Brahman, which are better suited to a hot environment, have a better meat quality?”

Texas and other Gulf Coast states produce crossbred cattle, which are part Brahman. However, research at the cellular and molecular level in tropically adapted cattle lags that for temperate breeds such as Angus, said Welsh, who also has an appointment in the Department of Veterinary Integrative Biosciences within the Texas A&M College of Veterinary Medicine and Biomedical Sciences.

“If climate change occurs as predicted, there will be an increased reliance on tropically adapted livestock,” Welsh said. “Our USDA-funded project will acquire new cellular and molecular information about how energetics and temperament may interact to affect production of meat from both Brahman and Angus cattle. The objective remains to sustainably and profitably produce healthy food for healthy people.”

The team believes that with increased knowledge about Brahman-influenced cattle at the cellular level, they may potentially produce as high meat quality as found in the Angus.

“With the increasing global temperatures, commercial cattle producers benefit by use of a hybrid that includes Brahman,” White-Springer said.

Crossbreeding is a well-researched tool to produce beef economically and sustainably. Brahman and Brahman-influenced cattle have been proven to be the most economically efficient for beef production for Texas and the Gulf Coast states.

“I think that the hybrids are probably where a lot of the beef cattle production is going to go, because you do get the best of both worlds in a sense,” White-Springer said. “So, it will be important to determine how to increase the use of Brahman genetics and maintain meat quality.”

The 2022 dates for the Owning Your Piece of Texas: Key Laws Texas Landowners Need to Know program have been announced.

Cedar fever season is upon us once again, complete with runny noses, itchy eyes and general misery. But what exactly is cedar fever and why is…

In a La Nina winter, brace for impact

The National Oceanic and Atmospheric Administration has released its winter outlook for the next few months, and another La Nina weather patte…

Brahman steers near the conclusion of the finishing phase are in a pen at Bryan-College Station facilities.

Angus steers at the Texas A&M Department of Animal Science Beef Cattle Systems Unit are adapting to feed and the feed bunk prior to initiation of the feedlot phase data collection.

A Brahman steer at the beginning of the grazing period at Overton.