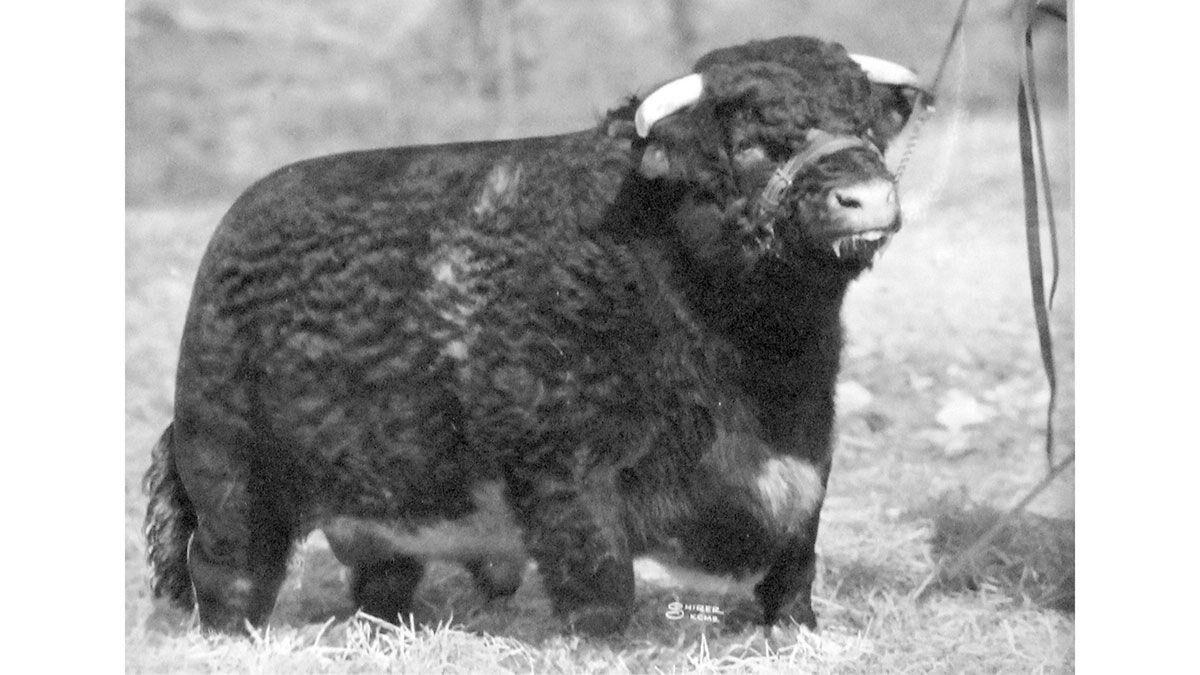 Leveldale Basis, born in 1950, had an influence on the Shorthorn breed nationwide for more than a decade. 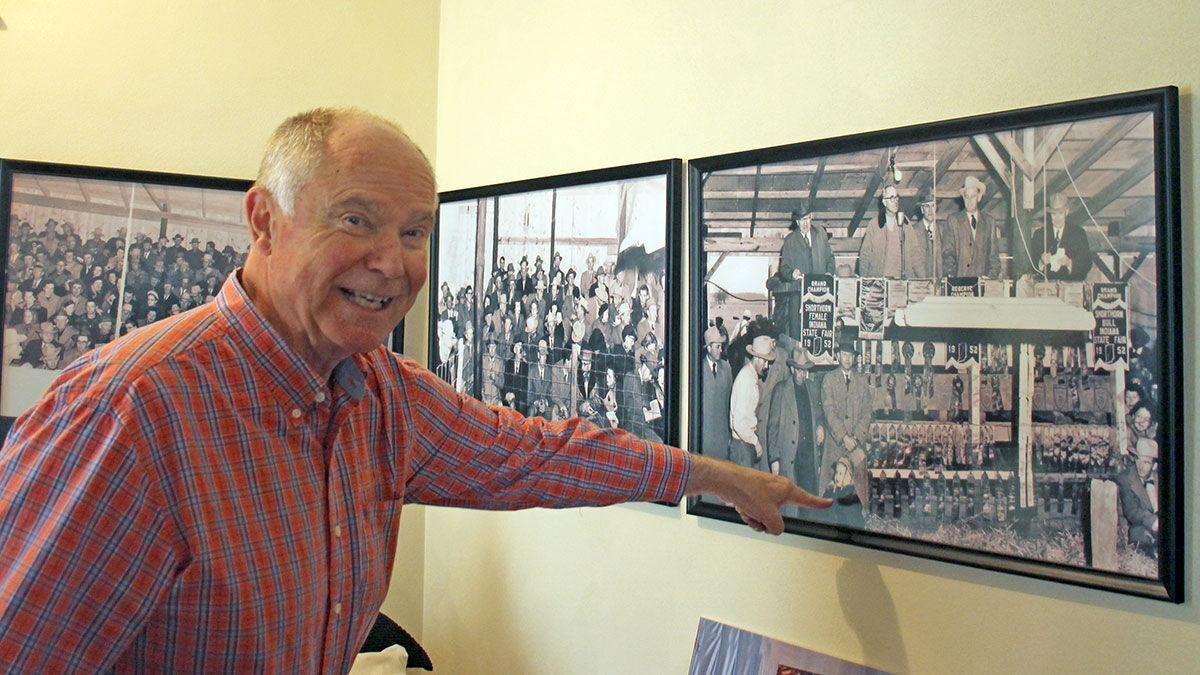 MASON CITY, Ill. — There he is in all his glory. A photograph of the famous bull who traveled the country by boxcar in his heyday, from show to show collecting championships, hangs on the dining room wall of a family farm in Mason City, Illinois.

Photographed in knee-high hay, so he looks shorter, Leveldale Basis was a big, curly-haired Shorthorn bull.

The black-and-white photograph of the champion bull doesn’t show his red color, but that color is apparent among Leveldale Farms’ modern Shorthorns grazing nearby. Changes in the breed over the decades are also obvious in the smaller, polled animals desired today.

“Leveldale Basis was born in 1950, a month before I was,” said Dr. Les Mathers, a medical doctor in central Illinois. He is also proudly L.E. (Leslie Eugene) Mathers III, a cattleman and owner of Leveldale Farms with his sister, Laura Conniff, continuing the legacy for the next generations.

In the 1950s and ‘60s, Leveldale Basis had “a huge impact on the Shorthorn breed,” said Doug Parrett, animal science professor emeritus and retired extension beef specialist at the University of Illinois in Urbana-Champaign.

“In this period of cattle history, there weren’t performance records or genetic selection tools like we have today. ‘Basis’ was used so heavily because his sons and daughters were sound, functional cattle that had the desired type to compete in national shows and also produced cattle that commercial beef herds could make money on,” Parrett said.

“In the 1950s, if a bull produced sons that other breeders wanted to buy, then that was the best measure of a bull’s genetic value. Among many famous Shorthorn cattle produced at Leveldale, Basis was a champion’s champion and his genetic superiority had an influence on the Shorthorn breed nationwide for more than a decade.”

With a veterinarian in the family, Leveldale was a pioneer of artificial insemination, which was first used in the 1950s.

The primary use then was to allow more purebred breeders to use elite beef bulls and gain their superior genetics, Parrett said.

Basis sired Leveldale Princeps, which in 1959 became the first international champion Shorthorn to be produced through AI, Mathers said.

Princeps was similar to the type that was popular at that time — somewhat compact, although he was described as “sizable and rugged,” according to the Heritage Shorthorn Society in its listing of “Classic Bulls.”

“Basis was the sire or grand sire of multiple champion bulls and cows in the late 1950s and early 1960s,” according to the society.

He also won multiple championships himself at the international show in Chicago, Mathers said.

It was the time when the best way to market cattle was to enter shows across the country. They traveled in box cars to destinations including Iowa, Wisconsin and Kansas City, with the prestigious International Livestock Show in Chicago being the biggest.

The road that led to Leveldale Basis’ fame started in 1852, when John Mathers got the title for some of the land that the Mathers family farms today.

By 1919 they had a flourishing herd of Shorthorns, with bloodlines imported from Northern England and Scotland, where the best of the breed was acknowledged to be at the time.

Shorthorns were the premier breed in the U.S. They were dual purpose for beef and dairy and some people even used them to pull things, Mathers said.

Leveldale Farms kept pace with the trends in the Shorthorn breed.

“During WWII, housewives didn’t want such large cuts to cook,” he said.

But in the 1950s, west of the Mississippi, they wanted bigger cattle when Leveldale Basis came on the scene.

The family eventually sold half interest of Leveldale Basis for $17,500 to John Alexander and Sons of Melbourne Farms.

“He did a great job for them as well,” Mathers said.

During the glory years of Basis, in the 1950s and 1960s, Leveldale held annual production sales. Attendees included J.C. Penney, Eli Lilly and Cyrus Easton. The men wore suits to the sales and women wore elegant dresses and high heels. The family still holds the annual sale, which is on Oct. 30 this year.

“Leveldale Farms was one of Illinois’ most famous purebred cattle operations,” Parrett said.

As the Shorthorn industry evolved, they transitioned to more commercial-style herds in the 1970s. The focus remains on good breeding for production and practicality today, he said.

In 2022, the American Shorthorn Breed Association celebrates its 150th anniversary, and Leveldale will celebrate its 170th year as a family farm.

The U.S. Senate Committee on Agriculture, Nutrition and Forestry Subcommittee on Food and Nutrition, Specialty Crops, Organics and Research he…

A Texas Watershed Steward workshop on water quality related to Mill Creek will be held from 1-5 p.m. on Dec. 8. Participants can earn continui…

Mental health should be top priority for ag groups

Oct. 10 was World Mental Health Day. The day provides an opportunity for all mental health stakeholders to talk about their work and what more…

Veterinary Viewpoints: When Should I Call the Veterinarian?

Many cattle owners often wonder how to determine if and when an animal needs veterinary attention.

With colder weather just around the corner, many farmers and ranchers are preparing to store machinery for the winter. Rodents will be eyeing …

The global temperature is rising, and it is having an impact on the livestock industry.

Leveldale Basis, born in 1950, had an influence on the Shorthorn breed nationwide for more than a decade.