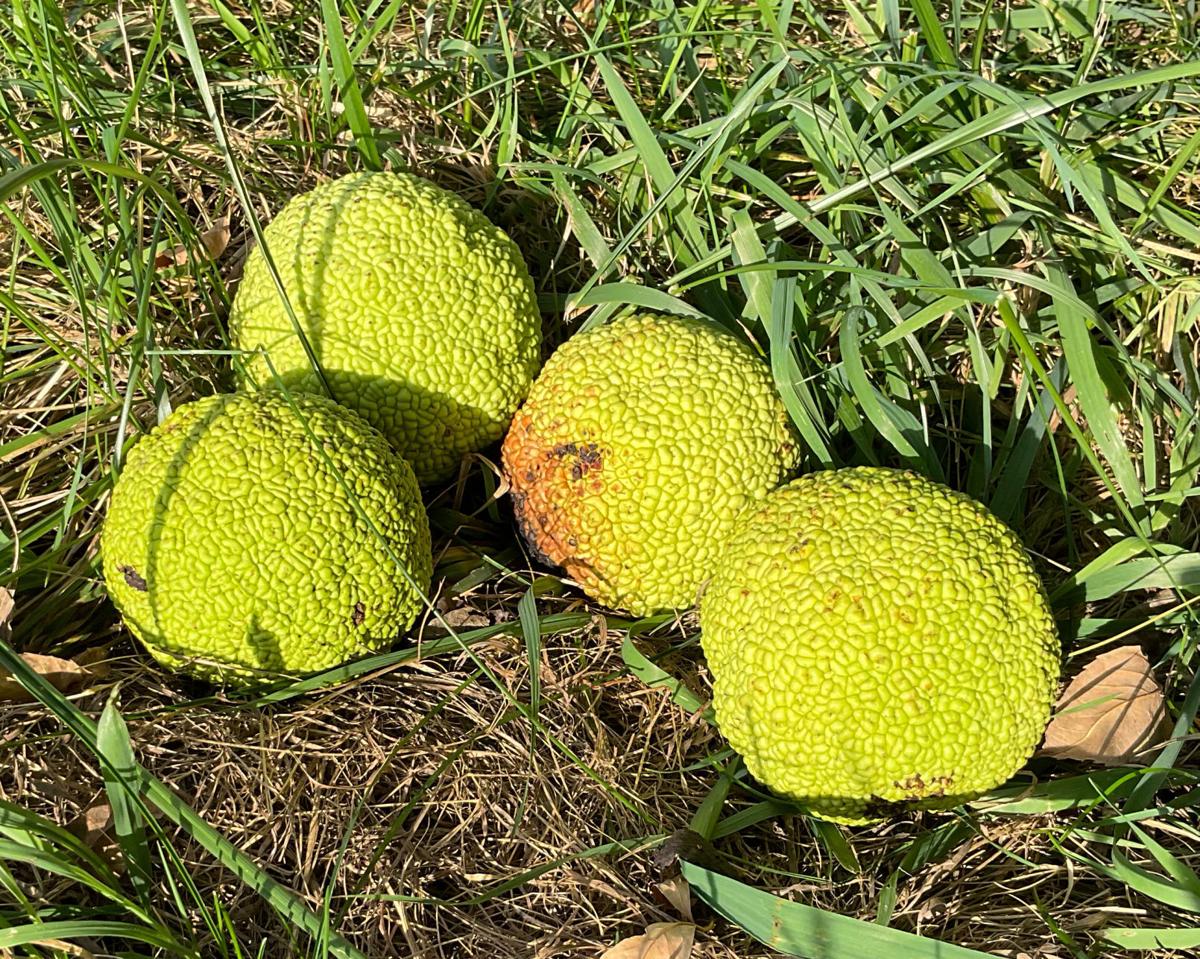 Hedge apple fruits are sticky and too big to mow over, making them a nuisance for disposal. 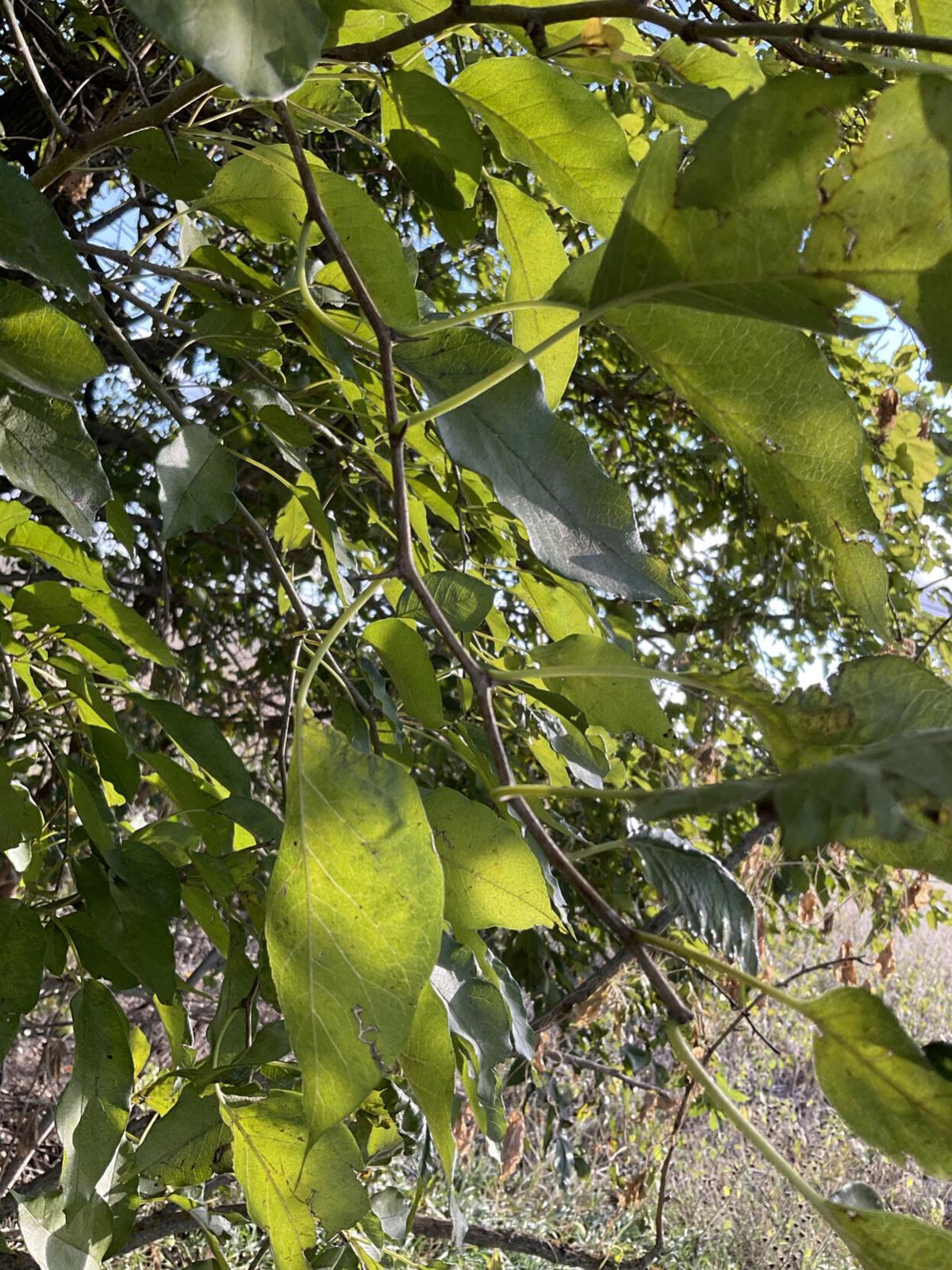 A closer look reveals the large thorns protecting the leaves of the Osage orange tree. 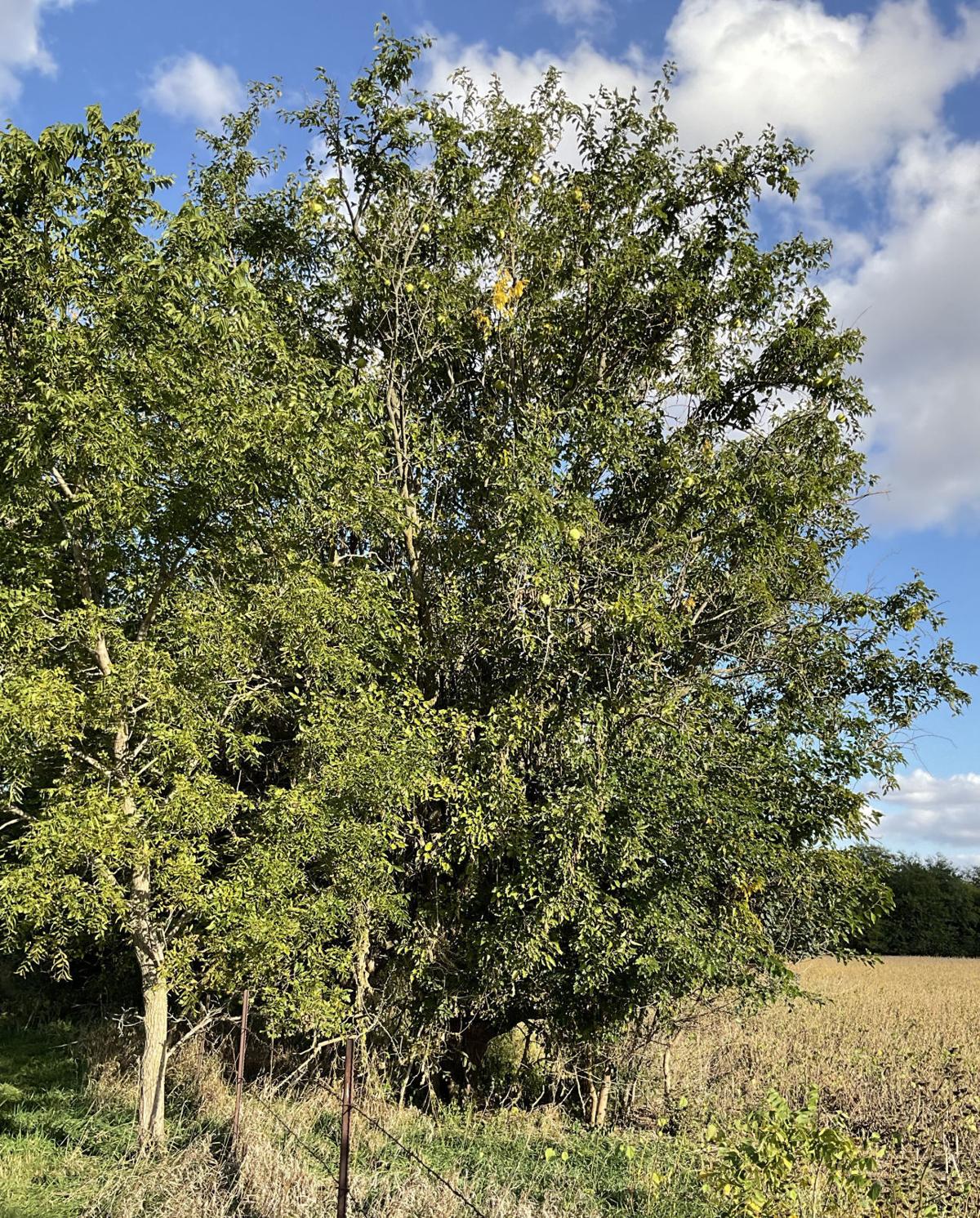 Do hedge apples really repel insects? They’re available in grocery stores now, but do they work? And where does such a strange fruit come from? There are many uniquely curious plants and hedge apple is one.

This tree has many names, so depending on where you’re from you may know it as hedge apple, Osage orange, bodark, bowwood or bois d’arc. Botanically, it’s known as Maclura pomifera. It’s not a member of the citrus family; the fruits are nothing like oranges and are not edible.

Osage orange is native to a small area of eastern Texas, southeastern Oklahoma and southwestern Arkansas. This region is the home of the Osage Indians, from whom the tree gets its common name.

Settlers found it transplanted easily, tolerated poor soils, extreme heat and strong winds and had no serious insect or disease problems. It was widely planted throughout the Midwest in the 1800s as a living fence. Its tendency to develop branches low on the trunk and its wicked thorns created impermeable thicket, making a great livestock barrier. It’s now considered to be “naturalized” throughout much of the eastern United States and beyond.

These deciduous trees are medium-sized, reaching 20 to 40 feet at maturity with a similar width. They grow well on difficult sites, including soil too alkaline for other trees.

It grows surprisingly fast for a dense-wooded tree, reaching 9 to 12 feet in a three- to five-year period. The leaves are a bright shiny green in summer, changing to yellow in fall.

Trees are dioecious, producing separate female and male trees. Male trees are fruitless; a few male cultivars with few thorns include Whiteshield and Wichita, but they are relatively difficult to find in the nursery trade. Female trees will produce fruits, even without male trees nearby, but the fruits will be seedless.

However, it’s not a great tree for home landscapes — due to the thorns and concussion-inducing fruits. Today, most consider the plant to be a weedy pest plant, but it’s not uncommon to still see trees growing in windbreaks or unmanaged wild areas.

The “apple” fruits are huge, 4- to 6-inch-diameter warty balls, about the size of softballs. Each fruit is actually made up of many fruits coalesced into one unit. The fruit ball turns from yellow-green to bright yellow in autumn and has been described as dangerous if you are unfortunate enough to be underneath one when it falls from the tree.

The fruits can be an awful mess with their thick, tough rind and lots of sticky, white sap. Fruits are numerous on female plants and disposal is a nuisance. They are far too large to mow over.

Rumors are plentiful regarding the insect- and spider-repelling properties of these fruits, and we see them for sale in grocery stores or farmers markets each fall. But despite many testimonials, there is no current research data showing the fruits actually have insect-repelling effectiveness. However, some people can develop dermatitis if the milky sap contacts their skin.

So, why would a tree develop such large, useless fruits? Long ago — 10,000 to 13,000 years — woolly mammoths (shoulder height 8.5 to 11 feet tall), ground-sloths (about 10 feet tall standing on their hind feet) and other extinct mega-sized mammals ate Osage orange leaves, twigs, branches and fruits, spreading seeds through their poop.

Thorns were probably the tree’s mechanism to attempt to protect itself from feeding by these ancient herbivores. The heavily rinded fruits protected some seeds from destruction by a ground-sloth’s teeth, enabling them to live on once expelled with the animal’s droppings.

Its fruits are now a remnant of prehistoric times. Now, only squirrels and some birds are able to pull apart the fruits and eat the seeds.

Sarah Browning is an extension educator with Nebraska Extension.

Hedge apple fruits are sticky and too big to mow over, making them a nuisance for disposal.

A closer look reveals the large thorns protecting the leaves of the Osage orange tree.