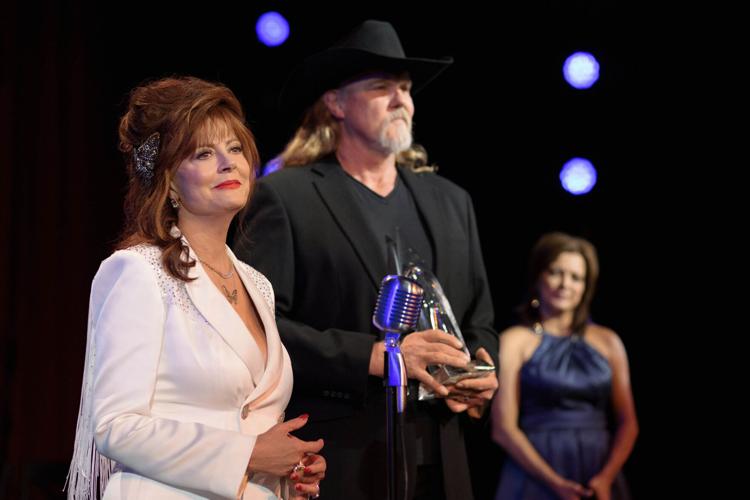 Susan Sarandon and Trace Adkins star in "Monarch," a drama about the country music business. 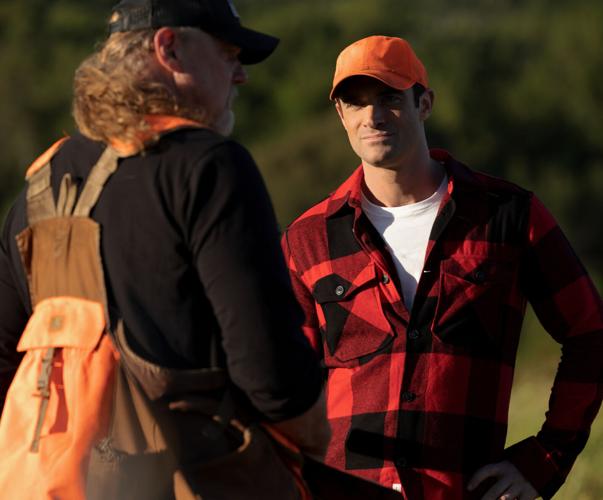 Trace Adkins and Joshua Sasse have a family/work relationship in "Monarch." 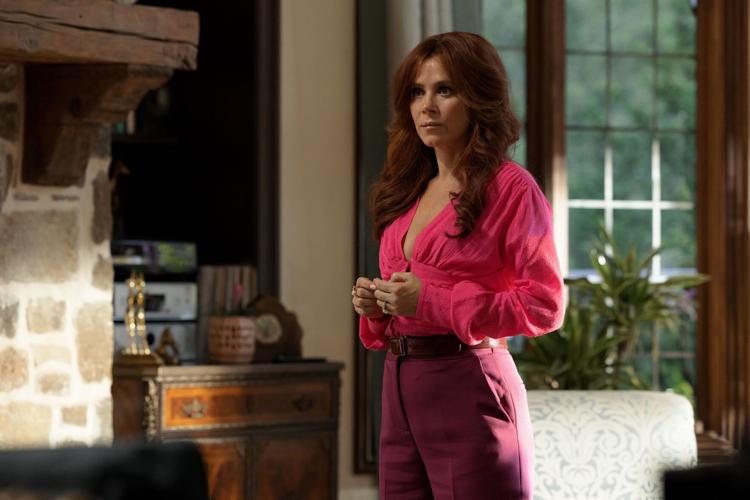 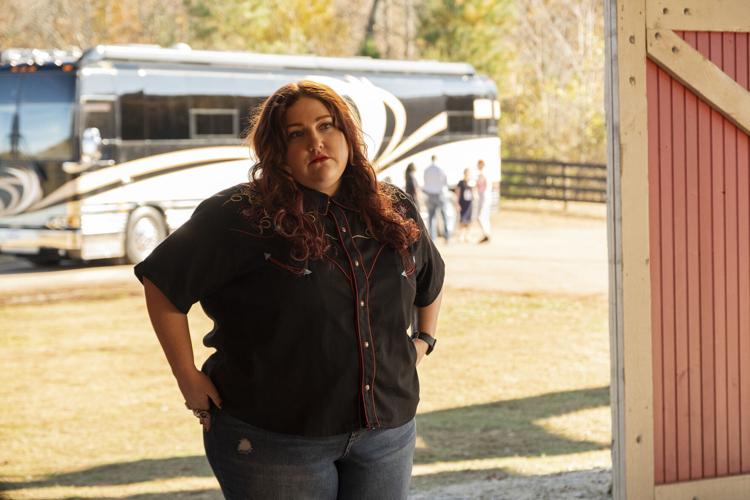 Beth Ditto plays the youngest daughter of Albie and Dottie Roman, the king and queen of country music in "Monarch." 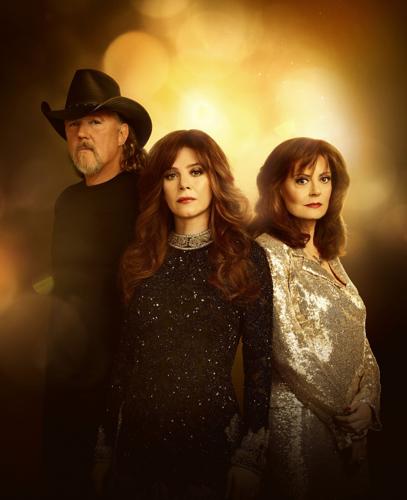 Trace Adkins, from left, Anna Friel and Susan Sarandon play the Roman family in "Monarch," a new drama about the country music business.

If you thought there were a lot of award shows in country music, wait until you see the new Fox series, “Monarch.”

Set in Nashville, it suggests those all-important totems of popularity drive the industry. Before the end of the first season, we get several tribute shows, including a nail-biting competition that pits family member against family member.

First, though, you must realize the Roman family is country's undisputed royalty. Dottie (Susan Sarandon) is the queen; Albie (Trace Adkins) is king. They’ve got two daughters, Nicolette (Anna Friel) and Gigi (Beth Ditto), who are hot to take mom’s title. She understands this and has a real convoluted way of passing on the family china.

“Monarch,” in fact, is such a mishmash of styles you don’t know if it’s satire or soap opera. Instead of crafting new songs for something like this (like “Nashville”), “Monarch” includes plenty of recognizable hits and suggests they’re the creations of the Roman clan. Shania Twain (who makes a guest appearance) gets a great shot at the practice but, largely, this is greatest hits sung by a cover band.

Created by Melissa London Hilfers, “Monarch” was supposed to air last season but pandemic shooting problems delayed the start date. That’s not necessarily in its favor. There’s a Judds-like episode that’s appalling and should have been nixed before the season started.

There’s also a mix of tropes that wear out quickly. Albie always seems to be reaching for his gun; Nicolette constantly stabs people in the back and Gigi looks for every way she can to ruffle feathers. Only son Luke (Joshua Sasse) tries to smooth things over and that’s probably because he also has a few skeletons that are ratting. Interestingly, he looks a lot like David Copperfield – wave an arm and, magically, the problems disappear.

Because “Monarch” (which is the name of the family company) doesn’t really dig beneath its “Dallas”/”Dynasty” trappings, there are plenty of moments that ring false. When the performers are on stage, they seem real. When they’re insulting each other at home, they look phony.

“Monarch” tries to get into the pressure that comes in something like the music business but country music is more laid back than most genres. You can see that when real stars step out for cameos. Karen Fairchild has a nice bit in a later episode; Tanya Tucker breezes through like she’s on a series of one-nighters through the Midwest.

And then, there’s Susan Sarandon. She’s the force behind all the intrigue. Determined to be a legend, she manipulates everyone – even Jesus, with her “half-Christmas” – and wonders why everyone isn’t supportive.

Because Hilfers constantly flashes backward, it’s never certain what has happened. This isn’t a “This Is Us” conceit. It’s a “This Is Them” one that doesn’t work.

Of the family members, Ditto wins the most support. She has a Wynonna streak that bodes well for longevity, but a sister who can’t seem to settle on a narrative.

The sprawling show features plenty of stray relatives (Faith Prince is a hoot as Dottie’s sister) and potential “writing” partners.

Friel does a great job playing a hot mess but Adkins is often saddled with lines that wouldn’t have made it out of “Gunsmoke’s” corral.

When you see how the first two episodes spin out (don’t even mention the hologram), you’ll understand why “Monarch” isn’t close to being a glimpse at what Nashville is really like.

There’s a great story to be told about the city (remember Robert Altman’s take?). This isn’t it.

Actress Selma Blair, who’s battling multiple sclerosis, continued to amaze with a “Jailhouse Rock” that included a cartwheel and splits. Yeah, they might not have been part of a traditional jive, but they certainly impressed.

Betty White’s belongings up for auction: Here are some items you could own

Among the highlights of items from the estate of Betty White are scripts from notable TV episodes, including Part 1 of "The Golden Girls" finale.

During the show's first year, creator Quinta Brunson had the luxury of crafting the episodes before any started airing. “This year, we will be in a different situation where we will still be filming and writing when the show starts airing,” she says.

If you gave “Murder, She Wrote” a contemporary spin and added in plenty of new media, you’d wind up with “So Help Me Todd,” a fun new mystery that brings out the best in Marcia Gay Harden and Skylar Astin.

'So Help Me Todd,' starring Marcia Gay Harden, springs from a son's quest for justice

When producer Todd Prendergast's stepfather disappeared in 2005, “I saw my mother collapsing, very upset, very emotional,” he recalls. “Something I called my ‘Incredible Hulk moment’ just kicked in and I said, ‘We’re going to find this guy.’”

Katie Couric, who underwent colon cancer screening on the "Today" show in 2000, says she was diagnosed with breast cancer on the first day of summer.

While it isn’t necessary to be a fan of the first “Quantum Leap” to enjoy this one, “there is an enormous amount of backstory and mythology from the original show,” Executive Producer Martin Gero says.

Sheryl Lee Ralph: Good things come to those who wait

It’s too bad the season premiere of “Dancing with the Stars” was limited to those with Disney+ subscriptions.

'Tell Me Lies' brings out a new side to Jackson White, Grace Van Patten

After playing someone who lies repeatedly, actor Jackson White finds himself over-communicating so he won’t be misunderstood.

Shakira to stand trial on tax fraud charges in Spain

Shakira to stand trial on tax fraud charges in Spain

Susan Sarandon and Trace Adkins star in "Monarch," a drama about the country music business.

Trace Adkins and Joshua Sasse have a family/work relationship in "Monarch."

Beth Ditto plays the youngest daughter of Albie and Dottie Roman, the king and queen of country music in "Monarch."

Trace Adkins, from left, Anna Friel and Susan Sarandon play the Roman family in "Monarch," a new drama about the country music business.