Ann Langel was part of the virtual audience on the "Dr. Phil" show. That's Ann in the second row from the top, far right. 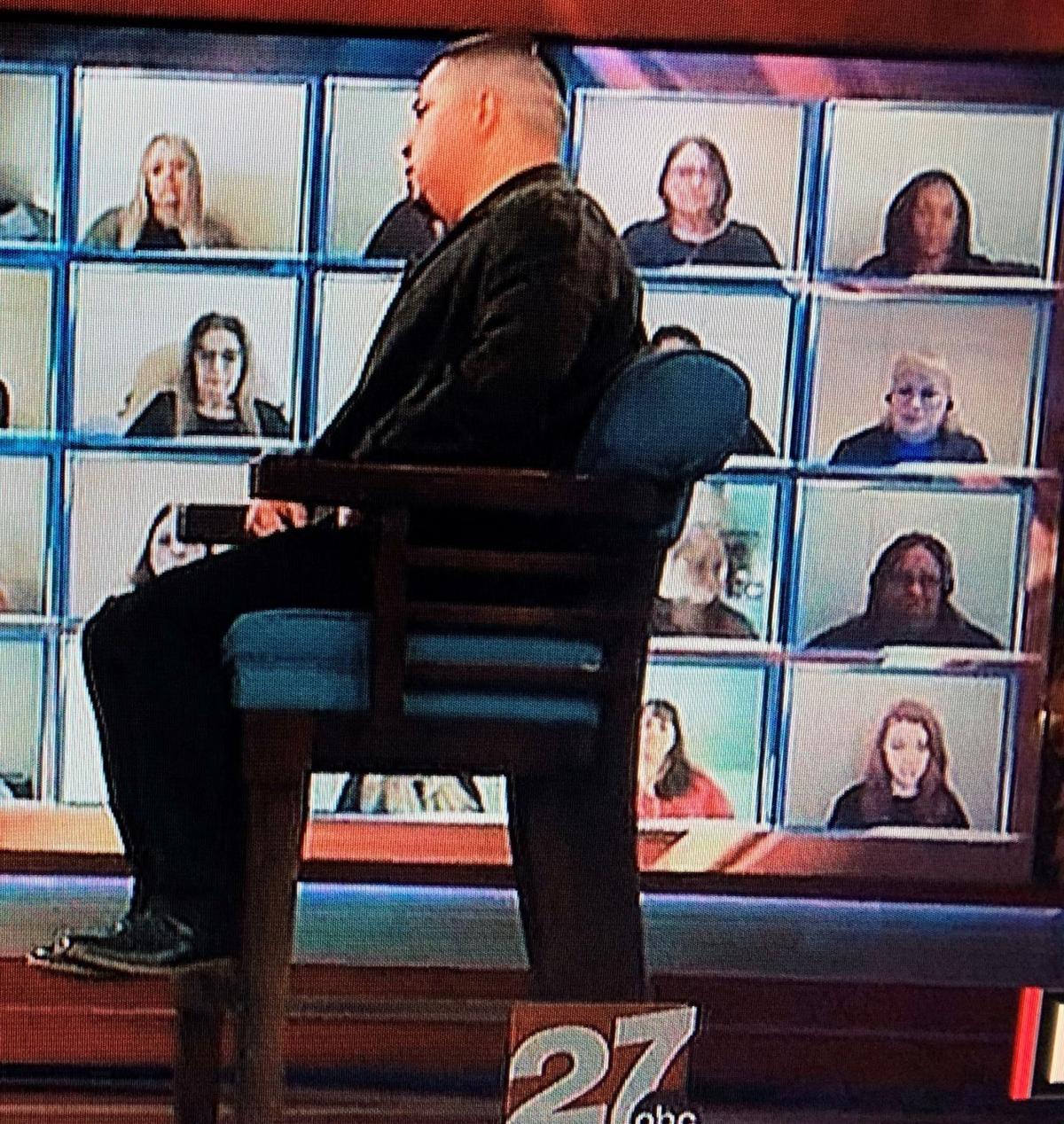 Second row from the top, far right: That's Ann Langel appearing on the "Dr. Phil" show as part of its virtual audience. 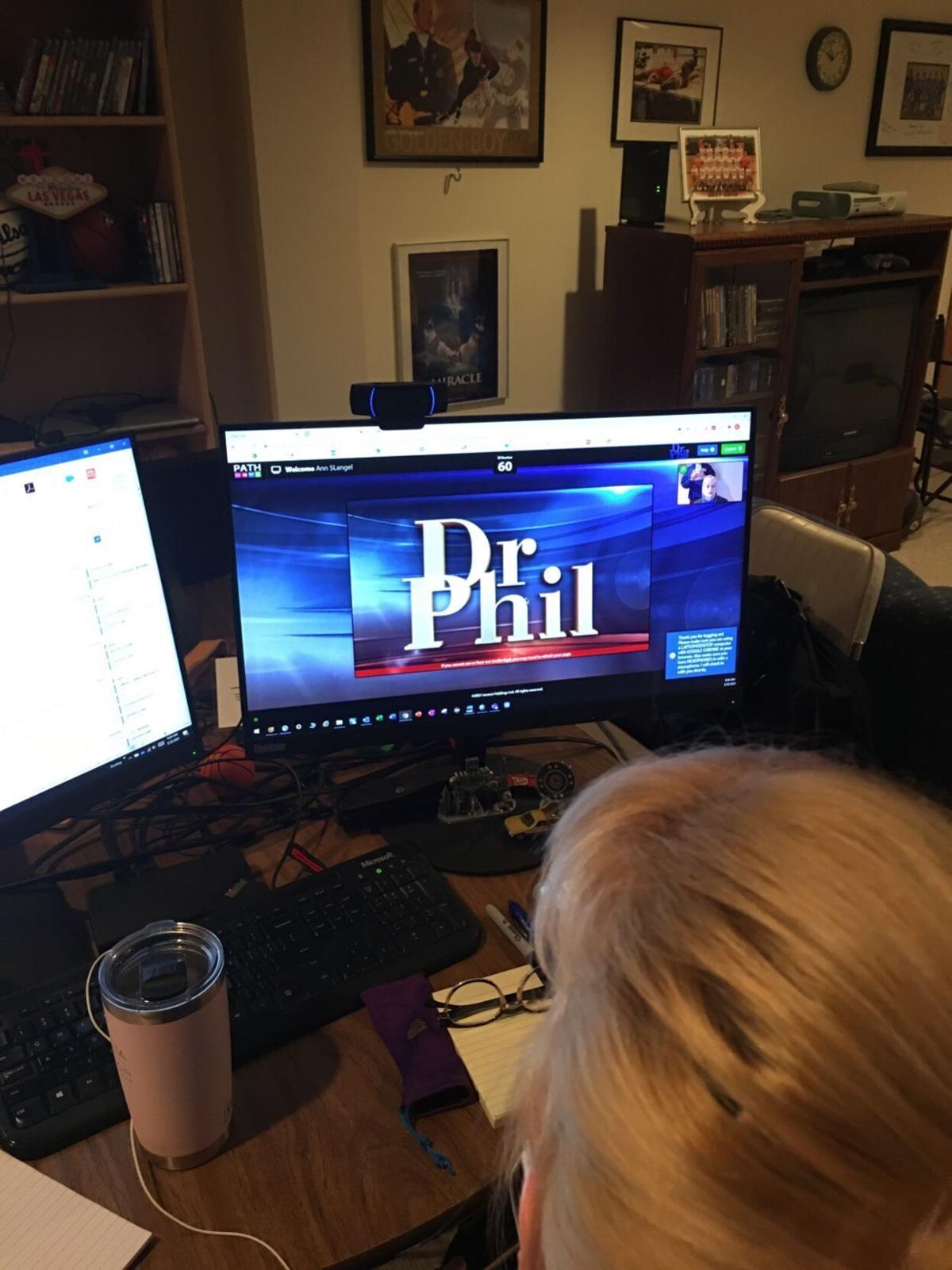 My husband and I have been working from home, together, through the pandemic – more than a year now. Like many couples, we made an effort to “learn something new or try something new.”

We learned Spanish through Babbel. After months all we can say is “aprendo Espanol” (I am learning Spanish).

We tried new recipes. And we gained a ton of weight. My husband figured out he could zest a lemon like nobody’s business. And I learned something that changed my life: a hoodie is not an apron.

Our reality/trash TV watching has gone through the roof. We can’t get enough of the shows where regular people are put in a work or vacation setting, cause chaos and then are filmed. And who can resist a group of people who write to prison inmates and await their release from prison? We are experts in judging others’ misfortune and bad choices.

In that vein, I was watching "Dr. Phil" one day and I saw an opportunity to be in the virtual audience. So I went to DrPhil.com and clicked on “be a part of the audience.” All you need is a Webcam on your computer and be 18 years old.

It tapes Mondays, Tuesdays and Wednesdays 8 a.m. to 2 p.m. PDT. So I clicked on it, and soon I was offered my choice of Monday, Tuesday or Wednesday of a certain week. You must be available to tape two shows over the six hours.

I selected my preferred date, and they confirmed it. They sent a nice 13-page PowerPoint with instructions.

But first you must do a technical test with the “audience department coordinator” the Thursday prior to make sure you have the correct equipment. "Wear solid dark clothing with no busy patterns, large logos or hats." Check. "Have a clean background" (scrutinizing each wall for its “blankness”). Check.

The run-through was a mess. I couldn’t get to where the “show” was. Turned out after a lot of patient coaching by Dagny that work laptops just aren’t compatible with the show software. She hung with me for a long time on the phone as we went from computer to computer in the household. I couldn’t believe they didn’t dismiss me just for that. Finally found another computer in the house that worked with Dr. Phil’s set up – my husband’s work desktop computer -- and different headphones. That worked, but then I had to take down all the sports memorabilia behind me as I had to move from my “perfect” virtual audience background to another spot in the house.

I told my hair stylist I’d need an early morning appointment the day of taping so my hair looked good. But then I studied the virtual audiences of some "Dr. Phil"  episodes and I realized you can hardly recognize anyone in the “virtual audience” (walls of individual computer screens, for a total of 100 “boxes” of people – some audience “walls” you can’t even see) among all the people wearing dark solid colors in front of sterile white or beige walls, so no need to look like I just walked out of the salon.

I studied the requirements for the taping: "You are to refrain from eating or drinking while on camera, as we can be seen on screens behind Dr. Phil and guests. Only one person per camera. Be aware of surrounding noise as your applause, laughter, and reactions will be recorded.”

After I’d passed the Thursday “test,” as they called it, I was confirmed for the Tuesday, March 23, tapings of the shows. Whew! Now to sign the 1.5-page agreement.

So Taping Day for these episodes of Dr. Phil’s 19th season rolls around. You have to be in your seat at your computer by 8 a.m. PDT. They finally got me all hooked up after yet another problem – my headphones were causing an echo. Another panicky moment for me, and we switched to Bluetooth headphones with an admonishment they be fully charged, and they coached me on centering myself in the screen, and I was ready to go at 8:30 a.m. PDT. They then take a break until 9 a.m. PDT. (A heart-racing 30 minutes as we’re frantically charging the Bluetooth headphones.)

There are notes on the screen about it being “final call” to turn your cell phones off, put dogs in another room, etc. Jay Flats is an entertainer and warms up the audience. He has been warming up audiences for 20 years, and that includes warming up audiences for “Dancing with the Stars,” “American Idol,” “The Masked Singer” and the “Titan Games.”

“I love the Dr. Phil virtual experience because it’s a challenge and I love doing new things! Even during a pandemic I still find ways to be a class clown!” he says later for this story.

More “final warnings” to get serious and take your last sips of your beverage. I see I’m in “seat 60” and am on the far right of the middle screen. Yay. A prime position.

A green “applause” (a couple hands clapping) icon comes on the computer screen, and I make sure I clap loudly and position myself where they can see my hands. (I look later and my hands look clownishly huge.) They introduce the episode to be taped – a “Where are they now? You asked, we answer!” series of three guests with updates on what’s happened to them since their original shows.

Dr. Phil walks out with his wife, Robin. First is “Raging Ryan.” He appeared during the 18th season with his sister, Alyssa. Ryan, 27, had an anger, alcohol and marijuana problem. Dr. Phil sent him to treatment for four months, and Ryan appears on the show looking good. Ryan and Alyssa appear in person on stage. He got his diploma. Has a good job. Makes good money. Sang a country song he’d written for Dr. Phil. We in the audience are touched.

However, Alyssa says, “He’s still a monster.” I do my best “C’mon, Alyssa. He’s trying!” outraged gesture with my arms.

It’s a little difficult to take notes and look like I’m not taking notes. Wondering whether my scribbling “man hands” can be seen on camera.

Next “update” in the episode is Heather. She’d just appeared in a show three months ago about domestic violence. Her boyfriend of 4.5 years, Collin, had choked, dragged and bit her. Collin admits, “My hands were around her neck, but I didn’t squeeze.” I’ve become an expert at the on-screen eye roll.

Now we have a 30-minute break. I’m wondering what Dr. Phil has for lunch. How will he keep it from dribbling on his suit? Will he change clothes? Later, I’m told the McGraws have food from restaurants near the studio waiting for them during the break.

Back in our seats. The lines between all the computer screens look like concrete blocks behind us – I look like I’m either at school or in prison.

Ready to tape next episode. The next guests are in the studio. They are in masks and are walked to their stools, and production has them put their masks in a paper bag for disposal. Dr. Phil looks fresh as a daisy. Robin has changed into a top and jeans.

The second episode was another domestic situation, and the male gets the help he needs. This second episode hasn’t aired yet, so I’m not able to reveal anything more about it.

Dr. Phil does a plug for his fans’ Facebook group, “Dr. Phil Phanatics” and a plug for Robin’s “I’ve Got a Secret” podcast. Dr. Phil and Robin do a plug for how to get tickets for when they’ll go back to a studio audience. Dr. Phil is good at these; it takes Robin three takes.

They walk off, and we’re finally done. It took a total of almost six hours, as they’d described. I’m energized and dying to tell everyone how awesome it was.

But I’m left with just one question – when are the Emmys for virtual audience members?

Ann Langel is an executive assistant with Lee Enterprises and is based in Madison, Wis. She can tell you everything you don’t want to know about the Kardashians.

Virtually there: How do they get those audiences in TV shows?

Is it a talk show if there’s no one to talk to?

Ann Langel was part of the virtual audience on the "Dr. Phil" show. That's Ann in the second row from the top, far right.

Second row from the top, far right: That's Ann Langel appearing on the "Dr. Phil" show as part of its virtual audience.