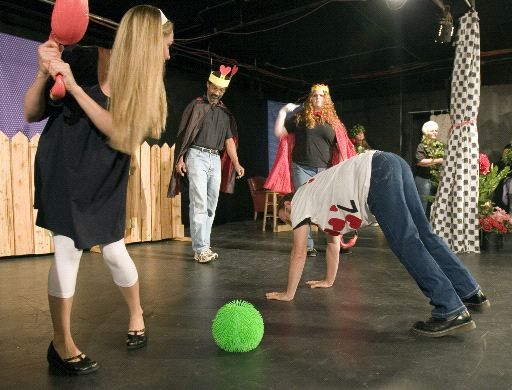 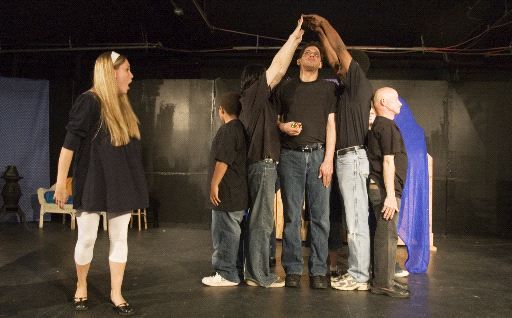 Actors form walls and a door for Alice (left, played by DeAnn Benning) in StageCenter's Alice in Wonderland. 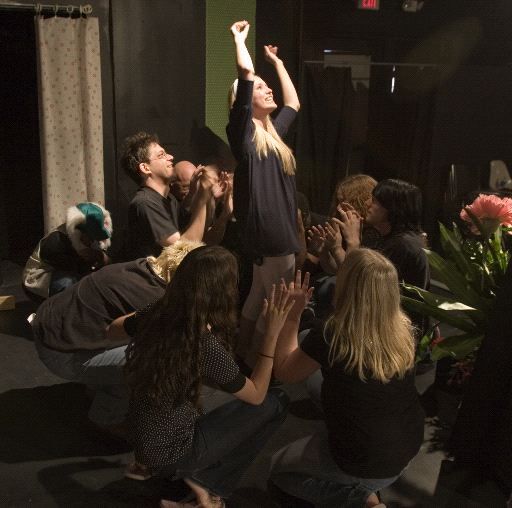 Alice (center, played by DeAnn Benning) goes down the rabbit hole in StageCenter's production of Alice in Wonderland.

Most actors would be upset if their performance were described as "wooden." But the cast of StageCenter's Alice in Wonderland would consider it a compliment.

Actors will be playing walls, doors, croquet wickets and even a rabbit hole as director Amy Ressler challenges the audience to use its imagination.

"I think that's what Lewis Carroll intended when he wrote Alice in Wonderland," Ressler said. "He wanted his readers to use their imagination."

Costumes will be more suggested than literal. For instance, Matthieu Myrick's outfit as the White Rabbit will consist of a hat with floppy, bunny ears and a vest.

Ressler has chosen a creative solution to the problem of shrinking Alice after she drinks the potion. Instead of the little girl getting smaller, the door becomes larger by exchanging the people who portray the door.

"The actors will use body language to express their roles as objects," Ressler said. "It's been an interesting process. I'll say try this or try that. Or one of the actors might suggest something. Some things haven't worked out, but most have. The cast has been very collaborative and receptive."

Some special effects, such as the appearance and disappearance of the Cheshire Cat, will be accomplished by lighting tricks.

"The columns on stage have been a challenge to work around in other productions," Ressler said of the unique aspect of the community theater's new home in the former 3rd Floor Cantina. "But I've had fun figuring out how to use them in this show."

The story about the little girl who follows a white rabbit down a hole and ends up meeting a host of odd characters, such as a Mad Hatter, Mock Turtle and a deck of cards come to life, has been a children's favorite since it was published in 1865. Ressler said StageCenter's version should be just as appealing to kids. An example is the courtroom scene in which the jury will be sock puppets made by cast member Allie Dillard.

"At the end, Alice says she hopes everyone gets to visit Wonderland," Ressler said. "The play has a lot of fantasy and fun."

A special tea party with Alice and the Mad Hatter will be at 1 p.m. April 22. Tickets are $8 for the party and play. Reservations are required by calling 823-4297.

Billie Eilish: People don't know anything about me

Billie Eilish: People don't know anything about me

Demi Lovato reveals what led to their 2018 overdose

Demi Lovato reveals what led to their 2018 overdose

Elizabeth Olsen has secretly been married for months

Elizabeth Olsen has secretly been married for months

Check out photos from celebrity weddings in the 1950s and '60s

Wedding gowns like those worn by Grace Kelly and Jacqueline Bouvier were endlessly copied, as were the choices of pearl chokers, veils, and flowers in the bouquets of countless others.

Frank Bonner of 'WKRP in Cincinnati' dies at 79

Frank Bonner, who played a brash salesman with an affection for polyester plaid suits on the TV comedy "WKRP in Cincinnati," has died. He was 79.

Johnson admitted he isn't sure if he has "the patience" for the role, but he was flattered to discover that 46 percent of Americans would back him for the White House.

Now that Lil Dicky has a bigger slice of success his neuroses are off the chart.

Bruno Mars doesn't miss. So in teaming with multi-hyphenate performer Anderson .Paak — this is the first offering off the duo's upcoming debut album, "An Evening with Silk Sonic" — he's created a timeless-sounding, retro-R&B love jam that is crafted with care and precision and actually sounds romantic, a quality missing from so many of today's wham-bam odes to hooking up. Here's to hoping the album fully carries on that vibe.

Beyond 'In the Heights,' colorism persists in Hollywood and is rarely addressed

Every year, Hollywood faces criticism for its lack of racial diversity. But another pervasive problem also resurfaces: the lack of diversity in skin tone.

Those fitness gurus from the 1980s: What happened to them?

Sure, you remember Jack LaLanne, moving vehicles with brute force. But who else got the heart pumping during the 1970s and 1980s?

Masked Wolf, "Astronaut in the Ocean"

Australian rapper Masked Wolf's recent Top 10 hit has been hanging around since 2019 but got a recent bump from TikTok, as its opening — which goes silent before Wolf's first line and a hard-hitting beat drop — make it perfect for the video platform. It's the rare song that peaks at the very beginning, which makes it ideal to cross-fade into mixes; you don't need to hear the whole thing to get the full effect.

Frank Bonner, Herb on 'WKRP in Cincinnati,' dies at 79

LOS ANGELES (AP) — Frank Bonner, who played a brash salesman with an affection for polyester plaid suits on the TV comedy “WKRP in Cincinnati,” has died. He was 79.

Q&A: Rita Moreno on finding self-worth and never giving up

Rita Moreno was forthright in an interview with the AP while occasionally reaching for a tissue for springtime allergies. "All that cocaine," the 89-year-old joked.

Actors form walls and a door for Alice (left, played by DeAnn Benning) in StageCenter's Alice in Wonderland.

Alice (center, played by DeAnn Benning) goes down the rabbit hole in StageCenter's production of Alice in Wonderland.