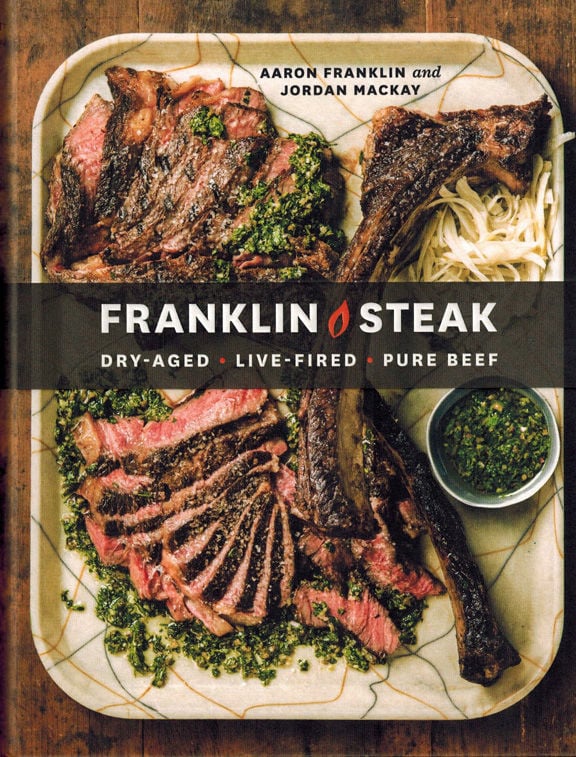 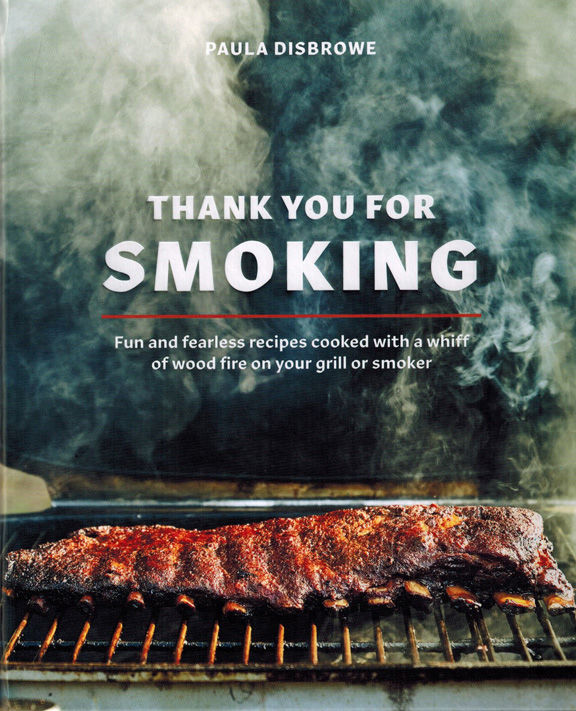 Thank You for Smoking by Paula Disbrowe (Ten Speed Press, $30)

Surely by now you’ve fired up the grill at least once or twice, and you look forward to more grilling as the days get warmer and the wind dies down.

Here are two new books that might give you some fresh ideas to try on the grill: Franklin Steak by Aaron Franklin and Jordan Mackay (Ten Speed Press, $29.99) and Thank You for Smoking by Paula Disbrowe (Ten Speed Press, $30), both colorful hardbacks.

First, the Franklin book. Aaron Franklin is the Austin barbecue guru whose restaurant sells out of brisket every day. But he’s not just about barbecue. He loves to cook steaks, and he’s teamed up with co-author Mackay to write a book about it.

It’s a cookbook, I suppose, but not so much a recipe book. Franklin and Mackay delve deeply into the science and art of cooking steaks, with chapters on the story of beef, buying steaks, steak cuts, dry aging, the grill, fuel, firing up, cooking and recipes for sides and sauces.

With most cookbooks, you can just flip through and find recipes that sound interesting and pick out a few to savor. Franklin Steak isn’t that kind of book. It’s one to be read all the way through before starting to grill.

Franklin, who grew up in Bryan, calls the book “our so-called love letter to steak.” In case you’re wondering how they could write a whole book about steak, the authors reply, “How can we ever meaningfully cover steak in just one book?”

Well, I think most readers would conclude that they do a very thorough job of it.

Thank You for Smoking is more of a traditional cookbook, full of recipes and cooking instructions and tips.

Disbrowe, who also lives in Austin, has written or co-authored seven cookbooks, including Any Night Grilling and Cowgirl Cuisine.

In her new book she includes 130 recipes, with chapters on fish and seafood, poultry and pork, and beef and lamb, but also sections on smoked spices, smoky cocktails, and grains, nuts and seeds, as well as peas and beans, vegetables and greens and desserts.

Plenty of good ideas and recipes to try out this summer.

Glenn Dromgoole writes about Texas books and authors. Contact him at g.dromgoole@suddenlink.net.

TEXAS READS: Take a peek into American espionage with 'To Catch a Spy'

‘Few Americans realize the extent to which foreign intelligence services are stealing our most important secrets, right here at home, right un…

Stephen Harrigan’s long-awaited comprehensive history of Texas is scheduled for release by the University of Texas Press in October.

Taya Kyle has teamed up again with Jim DeFelice to produce a book of inspiring stories, American Spirit: Profiles in Resilience, Courage, and …

TEXAS READS: 'It’s who likes you’ -- and plenty of big names have liked Chris Christian

Chris Christian grew up in Abilene before hitting it big in the music business in Nashville, Los Angeles and Dallas. He tells his inspiring an…

Sarah B. Smith was in her 30s when her mom, affectionately known as Beauty by the family, was diagnosed with early-onset Alzheimer’s disease.

Turning the Pages of Texas by Lonn Taylor (TCU Press, $22.95 paperback) is a literary jewel that relates the stories behind the stories of som…

Thank You for Smoking by Paula Disbrowe (Ten Speed Press, $30)