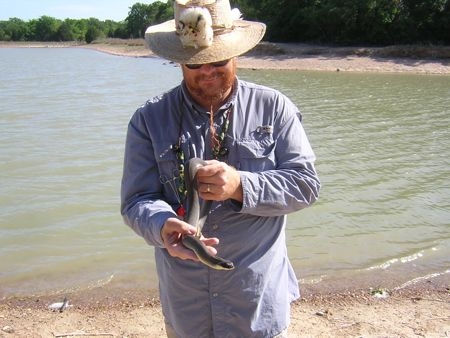 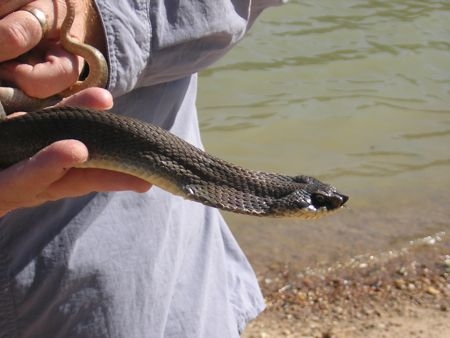 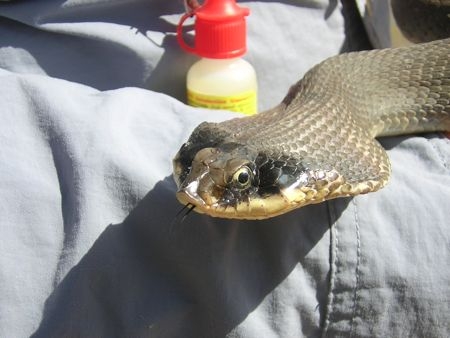 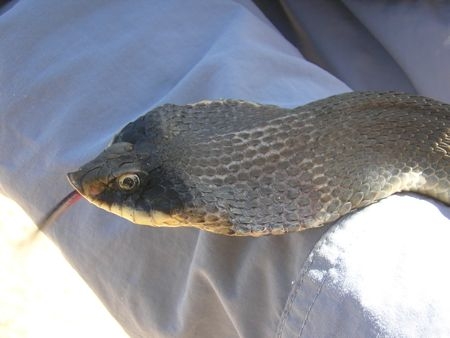 My friend Brian, the kids and I were fishing for crappie in the channel between the two sections of Lake Bryan one April day when from the opposite bank a very thick dark snake came swimming right towards us.  The young couple fishing next to us on the shore were getting kind of worried as was I because the snake had the right shape and color to be a water moccasin.  As the snake got closer to our side of the channel it veered left and was heading right at the young couple.  As they backed away from the bank Brian moved in for a closer look.  The snake was bound and determined to come up the bank which I would normally let it do but Brian leaned over and snatched up the snake about midway down it's body.  Now if I didn't know Brian already I'd say he was crazy for even getting that close much less picking the dang thing up!   Anyone else would have probably mistaken this snake for a water moccasin and killed it first and asked questions later.  Brian quickly identified the serpent as a eastern hognose and knew that it was harmless.  He also knew the biology and behavior of this particular species and set about teaching a lesson to the kids with us that day.

A hognose will hiss and puff up like a cobra in a very threatening posture and false strike but they don't typically bite. They also will play dead and excrete a very foul odor to go along with playing dead.  This particular snake put on quite a show for us before we let it go on it's way through the brush.
Not long after the hognose had made it's departure another snake came from the same area, swam about halfway across the channel but retreated back to where it came from when it saw us.
I see snakes all the time and as long as they don't bother me I don't bother them!

FishTales: To an End