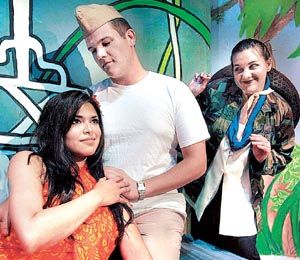 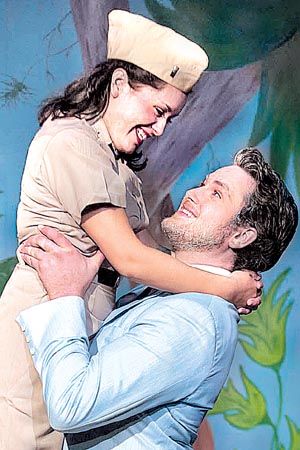 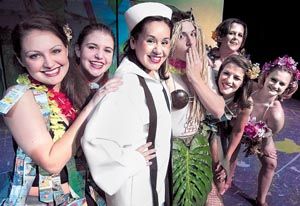 Grant Soderberg, who stars as Lt. Cable, admires Yolanda Reyna — who plays Liat — while Stacy Erskine as Bloody Mary looks on with approval in a scene from “South Pacific.”

Adrienne Dobson, who plays Nellie Forbush, gets a lift from Justin Dollar, portraying Emile De Becque, in a scene from “South Pacific.”

Tropical beauties — and an impostor or two — abound in The Theatre Company's production of “South Pacific.”

If you’ve seen only the movie, you haven’t seen “South Pacific,” says Randy Wilson, director of The Theatre Company production.

“The movie expanded on the setting with the islands and the seas and men in airplanes. The play focuses on the love stories,” Wilson said.

Who: The Theatre Company

Where: Tejas Center, Villa Maria Road and Texas Avenue; turn at the entrance next to McDonald’s and go behind Tejas Center.

A good example is the island of Bali Hai.

“One problem with the movie is that it showed you Bali Hai,” Wilson said.

“I took the island out, so when Bloody Mary sings the song, she and Lt. Cable are looking out over the audience. Everybody has their own vision of Bali Hai, and we are going to let the audience create their own island.”

The Theatre Company of Bryan-College Station opens its 2004-05 season Friday with the musical based on James Michener’s Pulitzer Prize-winning novel, “Tales of the South Pacific.”

Wilson’s production is different from the Broadway classic, which some consider the finest work by composer Richard Rodgers and lyricist Oscar Hammerstein II.

“We’re going to stage the overture,” Wilson said. “I got the idea from the Broadway production of ‘Carousel’ that showed Julie Jordan meeting Billy Bigelow.

“We’ll start with the troops arriving on the island and Emile De Becque’s first meeting with Nellie,” he added.

“Our choreographer Adrienne Dobson has so many good ideas, I figured, why not use them,” Wilson said. “So we’ll have three little ballets to help the flow. It’s really been a joy seeing it unfold.”

Dobson is also playing nurse Nellie Forbush, the girl from Little Rock, Ark., who finds herself in an exotic paradise in love with a mysterious Frenchman.

“I don’t see how she can do the choreography and play Nellie, too. But she has the energy and innocence to pull it off,” Wilson said.

A more noticeable change, in terms of audience awareness, comes in the nationality of De Becque’s children by his late wife.

“I decided to make them Japanese (instead of the original Polynesian) to make Nellie’s dilemma more clear,” Wilson said.

But one of the show’s most memorable and entertaining scenes — Nellie washing her hair on stage — will be real.

“We’ve got a shower stall with a vat over it,” Wilson said.

“When she pulls the chain, she gets doused. Adrienne says she can dry her hair in plenty of time, and the show is really written for that, with the love story of Cable and Liat following the shower.”

Dobson is a senior at Texas A&M University who has been one of the most active members of The Theatre Company, both as actor and choreographer.

“When Randy picked me to play Nellie, I was completely flabbergasted,” Dobson said. “I was just hoping to be one of the bodies on stage. But Nellie fits my personality. I’m naturally optimistic.”

Dobson’s favorite scenes are with the rest of the nurses.

“It’s such fun doing the choreography and then dancing it with the girls,” she said.

Justin Dollar, whose recent credits include Frank Butler in “Annie Get Your Gun” and Guido in “Nine,” plays De Becque.

“If anyone wants to know how to play an older guy, tell them to call me,” he said, laughing.

Dollar’s favorite number in “South Pacific” is “This Nearly Was Mine” which has a similarity to “I, Who Have Nothing” that he sang in “Smokey Joe’s Cafe.”

“It’s all about having love and losing it,” he said. “I particularize it and draw on experiences in my own life.”

Stacy Erskine, who played Ren’s mother in “Footloose,” has the plum part of Bloody Mary. “She’s so much fun to play because she’s crazy,” Erskine said. “But she knows how to get her own way. She runs the island.”

Blake Whitaker, who has starred in “The Secret Garden,” “Hello, Dolly” and “Smokey Joe’s Cafe,” is using his Texas A&M experience to contribute to “South Pacific.” He is a junior is the Corps of Cadets Squadron 2 and is teaching the sailors and nurses how to march.

The show has an 11-piece orchestra directed by Greg Economides.