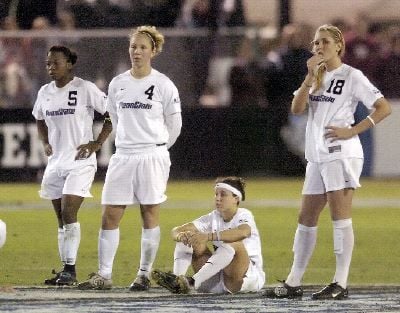 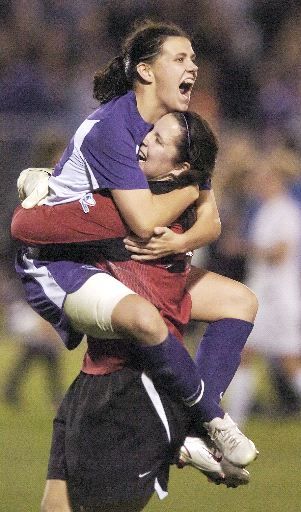 After 110 minutes and nine penalty kicks, the first College Cup semifinal came down to two Hermann Trophy finalists facing off from 12 yards apart.

Portland and Penn State played to a 0-0 draw and with the penalty kicks tied at 3, Sinclair calmly went left side to leave Erin McLeod guessing wrong and the Pilots moving on to Sunday's final, where they will play UCLA, a 4-0 winner over Florida State, in the other semifinal at the Aggie Soccer Stadium on Friday.

The Pilots celebrated on the field after Sinclair's shot hit the back of the net, but were a little more subdued about the result later, almost apologetic.

"I hate to win games on penalty kicks," Portland coach Garrett Smith said "There were two undefeated teams out there and we knew going into the penalty kicks that one of us was going to have an undefeated season and not win the national championship, which is a shame."

Penalty kicks go down as a tie on a teams record.

In the penalty kick session, Tiffany Weimar put Penn State up, but was immediately matched by Megan Rapinoe.

Then the keepers both stepped up like they had all game. Portland's Cori Alexander guessed right and got a hand on a well-struck shot by Carmelina Moscato. McLeod then matched her, getting a left hand on Lisa Sari's PK.

Allie Long put Penn State back up, and Angie Woznuk tied it at 2.

Heather Tomko went left side low, but Alexander, who went through a little ritual of touching both goalposts before each kick, was there with an outstretched right hand.

"Our goalkeeper coach advocates a little gamesmanship [when facing a penalty kick]," Alexander said of her routine. "Anything you can do to throw the field player off helps. They try to make penalty kicks a routine, and if you can intimidate them a little, it gives you an advantage."

It gave the Pilots the advantage they needed.

So did Colleen Salisbury, who had not played during regulation or the overtime and on her first touch of the game beat McLeod to her right side. Smith said he put the senior in cold because she has yet to miss from the penalty spot and that being left-footed gave McLeod something different to look at.

In the fifth and final round, the Nittany Lions' Sheree Gray left Alexander flat-footed to tie it, leaving Sinclair, the nation's leading goal scorer and last year's Hermann Trophy winner (player of the year), alone to win it.

Sinclair nearly ended it twice in the final two minutes of the second overtime. The first time she let Penn State off the hook by mishitting a shot from in close, after a nice buildup by Sinclair, Lindsey Huie and Sari.

The second chance, from the top left side of the penalty box, left McLeod watching as the ball hit the right post.

"I finally found some open space and had a chance with my left foot but I hit it with my purse," Sinclair said of the first shot. "[On the second chance] had an all right angle and struck it cleanly and thought it was going in, but the post got in the way."

Portland, going into the wind, had the best of the opportunities in the first half, with perhaps the two best chances coming in the first 10 minutes. Angie Woznuk made Erin McLeod dive to her left to stop a dipping shot from the top of the box.

Five minutes later, Rapinoe took control on a hustle play and then found Sinclair, who left-footed a shot that sent McLeod diving to her left again. McLeod got just enough of the ball to send it just outside the right post.

The Pilots next dangerous ball started with keeper Alexander sending it to Sinclair, who headed it on to Natalie Budge. Budge, who was free, hit her shot above the cross bar. McLeod was called on one more time, before the end of the half denying Lindsey Huie.

Fellow senior and the Nittany Lions' other choice for the Hermann Trophy echoed her coaches feelings.

"Erin had one of the best games I've ever seen a goalkeeper have, and I've seen a lot of soccer games," Weimar said.

On the final Portland attempt of the half, McLeod got help from Tomko, who hustled across the box to clear a Woznuk cross that was ticketed to Sinclair just outside the 6-yard box.

Penn State's best two threats in regulation came on restarts from just outside the penalty box. Alexander turned away both, the first with the help of the cross bar. Jean Rettig rocketed a shot for the top shelf that Alexander just touched enough to have the ball bound off the cross bar.

Late in regulation, Alexander spoiled Carmelina Moscato's blast by diving to her right and while parallel to the ground just getting a fist on it, sending it over the line.

"That's my job to put any part of my body on it to stop it," Alexander said. "They work their butt off out there in front of me so the best I can do is make a save or two for them."

The Nittany Lions had their moments in the first half but for the most part never really tested Alexander. Gray had time midway through the half but had her shot deflected for a corner by a defender. McLeod may have came closest to scoring, taking a free kick from just inside the midfield line that Alexander had to turn away from the far post for a corner after appearing to misjudge the speed of the ball.

NOTES - It was the second time in College Cup history that a game ended in a scoreless tie. The other time was in 1986 between Colorado College and UMass. CC advanced on PKs ... Portland is 3-1-1 against Penn State, including 2-0-1 in the tournament. .. The semifinal was the first time this season Penn State had been held scoreless. ... Sinclair, last year's Hermann Trophy winner and this year's leading scorer, has gone three games without a point.