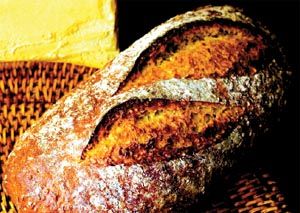 What do people crave most in dangerous, uncertain situations? Ask the International Red Cross, which distributes humanitarian aid in war zones, as it’s now doing in Iraq. They say it’s the makings for bread: flour and yeast. Whatever else may go in the food package, they must be there.

“Bread is symbolically more important than other foods in so many countries,” says Red Cross press officer Amanda Williamson. “If the means to make it become diminished, the people feel more in need than when they’re without other foods.”

Everywhere bread is made, people respond to it this way. For most of the world, the appetite for bread is an essential part of being human. In our country, we have such an abundance of things to eat that we forget what a central role bread once played in our diet, and still plays in many other places. Take Egypt, where the word for bread, eish, literally means “life.”

“He who has bread and something to dip it in,” runs an Egyptian proverb, “has the whole of happiness.”

In the Middle East — which is, after all, where it was invented thousands of years ago — bread has a sort of sanctity. If a piece falls on the floor, you don’t eat it, but you don’t throw it away, either. You’re supposed to pick it up, kiss it and put it on the table. (In an Egyptian movie, somebody who fails to honor bread in that way is sure to be the bad guy.) When people notice a piece of bread on the ground, they will sometimes pick it up and leave it in a visible place.

Bread is not just food; it’s the symbol of sociability. In eastern Europe, guests are traditionally greeted with bread and salt (in the Middle East, it’s with bread and water). “To break bread” is still our term for establishing or sustaining a social relationship. Even now, we consider it treachery to turn against somebody you’ve broken bread with.

Of course, “breaking bread” is just a phrase with us. We slice our bread; rather, we usually buy it pre-sliced. But in some places (in North Africa, for instance), the idea of cutting bread with a sharp metal implement, rather than breaking it with the bare hands, is found shocking. The association between sharing bread and unthreatening intimacy is that close.

There’s a widespread need to ask divine blessing on this central food. In Judaism, the breaking of bread is accompanied by a blessing, as it is in the Christian Eucharist.

Ten years ago I met a pious Sufi baker in Bukhara, Uzbekistan, who prayed over his dough as he kneaded it and symbolically purified his tandoor before baking by burning a handful of wild rue in it. Some customers wouldn’t buy from any other baker.

In the Middle East, bakers have the tandoor oven and the European-style brick bread oven to work with, and nomad cooks have introduced a highly portable griddle, called a saj, on which flat breads are cooked. So it’s not surprising that the number of breads that have been made there is immense.

It’s no accident that every civilization throughout history has been based on grain. Grains are the seeds of grasses, the go-getters of the vegetable kingdom: fast-growing, stripped-down plants consisting of nothing but roots and leaves. Not terribly finicky about climate or soil, these little machines for converting sunlight into food energetically colonize something like a quarter of the world’s land. Even the animals we have domesticated tend to live on grasses, so most of our meat, milk and eggs are recycled grass or grain.

And so are we.

Wheat is the most nutritious of the common grains, containing carbohydrates and every amino acid we need (though not all in sufficient quantity, which is why traditional foods so often combine wheat with meat, beans or dairy products).

It turns out you can’t live on bread alone, but you can live quite well without adding much else.

Decades back, Cosmo girls figured out the gimmick of using the smell of something baking to put a guy in a romantic mood. Well, it works — we’re hard-wired for it. There’s just nothing like the smell of fresh bread to give a feeling of comfort, of being cared for, a confidence that life will go on. It’s the basic comfort food. The proverbial Egyptian description of a sourpuss is: “He never smiles, not even for hot bread.”

Note: Adapted from English Bread and Yeast Cookery, by Elizabeth David. The bread can be baked on a baking sheet.

1. Dissolve the yeast in 1/4 cup of the water in a large bowl. When it starts to foam, stir in the remaining water. Combine 3 cups of the all-purpose flour with the whole-wheat flour and salt. Add to the yeast mixture, stirring until blended. Beat in additional flour as necessary to form a ball.

2. Knead the dough on a floured board until smooth and elastic, 10 minutes. Transfer to a greased bowl and cover with plastic wrap and a towel; let rise in a warm place until double in volume, 1 1/2 to 2 hours.

3. Punch down and form into a ball. Roll it in flour; set on a baking sheet sprinkled with 2 tablespoons of cornmeal. Cover with an inverted pot 9 inches or more in diameter. Leave in a warm place 1 hour.