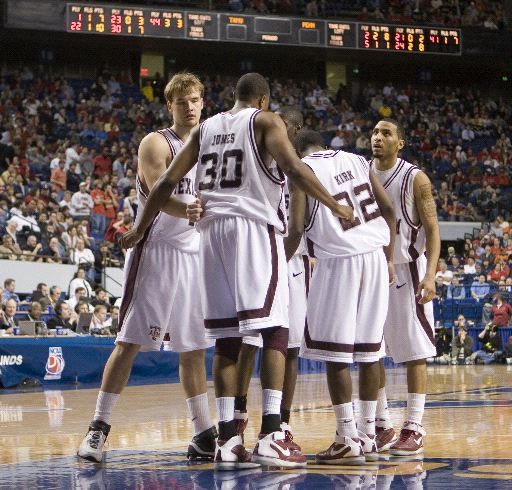 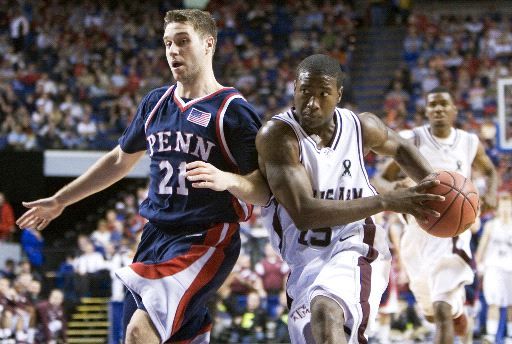 Texas A&M's Donald Sloan drives past Pennsylvania's Brian Grandieri for a basket during Thursday's first-round game in the 2007 NCAA Division I Men's Basketball Tournament at Rupp Arena in Lexington, Ky. The Aggies play in the second round Saturday against Louisville. 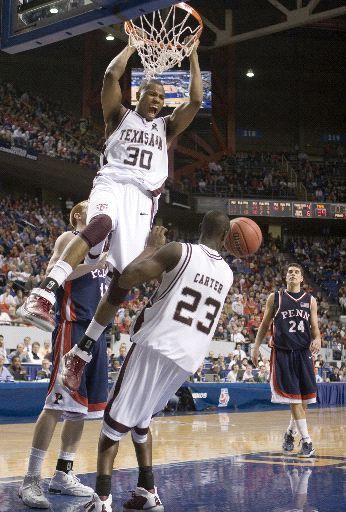 Texas A&M junior Joseph Jones slams home one of his two game-changing dunks Thursday in the Aggies' win over Penn.

LEXINGTON, Ky. - When the NCAA moderator for the postgame interviews at Rupp Arena introduced Joseph Jones on Thursday, he threw in a statistical fact.

"Representing Texas A&M is Joseph Jones, who had a double-double," he announced.

And if he had wanted to take it a step further, he could have added: "and a double-dunk."

Jones threw down the game-tying slam dunk and followed it with another jam that gave the third-seeded Aggies the lead for good in their 68-52 victory over Penn in the first round of the NCAA Tournament.

Jones picked up four of his points and three rebounds in a 42-second span to help the Aggies erase the Quakers' only lead of the game.

Two of the rebounds and all four points were on follow-up dunks after Acie Law IV had driven the lane and missed. Both times, Penn weakside defenders pulled off their men to help stop Law, and both times, Jones corralled the rebounds and threw them down.

"Those two dunks gave us a spark and [helped] get us on a run," Jones said. "I was just trying to be aggressive, attack the offensive glass."

Jones achieved his goal, pulling down a game-high 11 rebounds, four on the offensive end, and scoring 14 points on 6-of-11 shooting. He also tied a school Tournament mark with three blocks.

"I was really pleased with the way our team responded when they fell behind," A&M coach Billy Gillispie said. "They really played well from that point on."

Penn led 39-37 with 12 minutes, 55 seconds left in the game after Ibrahim Jaaber scored on a three-point play inside and again on a layup after a Kevin Agee hustle play saved a ball from going out of bounds.

Jaaber, the Ivy League MVP, scored 16 points but was held to three free throws after Penn seized the lead. A&M slowed down Jaaber with a defensive switch, putting 6-foot-8 Marlon Pompey on the point guard and, consequently, taking the Quakers out of their offense.

As part of the switch, A&M put 6-3 shooting guard Dominique Kirk on Penn's 6-7 Mark Zoller. The Aggies were giving up an advantage to get one, but by the time Penn coach Glen Miller called a timeout to make the offensive adjustment, the Aggies were ahead 47-39.

After the timeout, Zoller scored the Quakers next four baskets for eight of his team-high 19 points.

Zoller only had three points at halftime.

A&M could have saved itself a lot of grief by hitting free throws. For the second straight game, the Aggies struggled at the line, this time hitting just 56 percent and missing 5 of 9 during the Quakers' big run.

"It's a 40-minute game, and you're going to have good and bad periods against a team that has gotten this far," Gillispie said. "We just needed to hit some free throws and finish some plays."

Kirk got the Aggies off on the right foot, hitting his first three shots including two 3-pointers to give the Aggies a 10-3 lead.

"Acie did a good job of kicking it out for good shots," Kirk said. "I had wide open shots, got the ball, didn't think about it and let it ride."

In the second half, Kirk hit another 3-pointer and added a runner along the baseline to build the Aggie lead to 55-45. He finished with 16 points, one below his season high.

Miller called Kirk's basket along the baseline a typical A&M play down the stretch as the Aggies held the lead.

"We were doing well in a 1-3-1 [zone] situation, and [Kirk] made a big play along the baseline with 5 seconds remaining [on the shot clock]," Miller said. "Four or five times they made baskets near the end as the shot clock was running down."

Though the Ivy League champions came back to take the lead, Miller said his Quakers were eliminated because of their slow start.

"When you know you're playing a defensive team like A&M and you have open looks, you better convert," Miller said.

"And I thought we were intimidated and not aggressive enough, not believers early, and it cost us."

Penn made just one of its first 13 shots but trailed only 10-5 when Jaaber scored with 11:15 remaining in the first half.

A&M didn't have a larger lead because it turned the ball over four times in the first 6 minutes.

Law, who finished with a game-high 20 points, stretched the early lead with one of his patented runs. He scored seven straight points on a long 3-pointer as the shot clock was running down, a layup and a jumper.

From that point until the end of the half, six different Aggies scored to give A&M what looked to be a comfortable 31-18 halftime lead.

NOTES - A&M tied a school record with its 26th victory. ... A&M had only one turnover in the second half. ... The Aggies are 3-2 all-time at Rupp Arena. ... A&M held an opponent to less than 20 first-half points for the fourth time this season. ... Penn was held to less than 60 points for only the second time this season. ... Penn had shot 54 percent over its last seven games. Against A&M, the Quakers only hit 36 percent overall and 20 percent from behind the arc.

Texas A&M's Donald Sloan drives past Pennsylvania's Brian Grandieri for a basket during Thursday's first-round game in the 2007 NCAA Division I Men's Basketball Tournament at Rupp Arena in Lexington, Ky. The Aggies play in the second round Saturday against Louisville.

Texas A&M junior Joseph Jones slams home one of his two game-changing dunks Thursday in the Aggies' win over Penn.