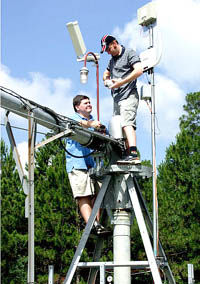 A technological revolution is on the horizon for American agriculture, and as a weekend rancher, I don’t know whether to rejoice or sell the farm.

The Associated Press reported last week that a University of Georgia project could turn ag producers into computer jockeys.

“ Farms of the not-too-distant future could be managed through wireless computer networks that allow farmers to sit in their pickups with laptops and drive tractors, monitor soil moisture and even feed the hogs remotely,” the AP reported.

The story focused on the work of Stuart Pocknee, leader of advanced technologies at a University of Georgia agricultural lab. He predicts wireless farm networks will be common in about five years, “helping growers with insect control, opening gates for livestock and controlling irrigation pumps.”

“ It’s a farmwide Starbucks, where a farmer can get his cup of coffee, sit in his pickup truck and log on to the Internet,” Pocknee told the AP.

Erin Macheski-Preston, at left, and Stuart McCarthy replace a wireless video camera on an irrigation system in Tifton, Ga.

Tapping on a keyboard in an air-conditioned truck is an appealing thought on a hot summer afternoon. But to be honest, I’m more comfortable driving a Deere than a Dell. I’d rather sweat for five hours than spend five minutes trying to learn a new computer program.

There’s another tall hurdle to leap, too. I doubt there’s a computer program on Earth that could adapt to the eccentricities of my poor-boy operation.

For example, Pocknee and his co-workers have come up with a tractor that can be guided through its chores by either GPS signals or by a human-operated joystick.

Sounds nice, huh? Sounds like you could program your tractor and post-hole auger, then kick back and listen to Waylon and Willie while your equipment drills the holes for you.

Last time I drilled post holes, I managed to hit both my water line and my sewer line within five minutes, sitting right up there on the seat of the tractor and putting the auger exactly where I thought it should go. At some point, you see, alien beings apparently landed behind the camphouse and moved the water and sewer lines a foot away from where I buried them 14 years ago.

A joystick or a mouse pad wouldn’t have helped, and there’s no way I could’ve entered the correct GPS coordinates of water and sewer systems laid more than a decade ago. If I had that kind of luck, I’d be a lottery winner by now.

A GPS system might actually work for mowing the pasture, but the computer would need to know a few peculiarities about my equipment.

The computer would need to know that the left wing of my shredder scrunches its way up into the air after it bounces across the pasture for a few hours, and you have to use a monkey wrench to screw it back down. If you don’t, the mowing job looks like a bad haircut.

You’d also need to make the computer understand that the mower’s universal joints are as old as Methuselah, and fragile. So you have to ease off your turn angle when they start clacking like George Washington’s wooden teeth.

Those remote-controlled corral gates the researchers are testing sound like a fine idea. They’d need to take into account the wide spectrum of bovine personalities who reside at the Diamond B Ranch, however.

Speckles, for instance, is a former show girl. My nephew raised her as an FFA project, and she’s so calm under pressure that she’s likely to stop right in the middle of the gate while you’re working her. You wouldn’t want an automated gate system to rush her into anything.

At the other end of the spectrum, there’s that Charolais-cross cow I bought from a neighbor a few years back. She doesn’t have a name ... at least not one you’d use in polite company. She hates corrals, and she blazes through gates like Sherman went through Georgia.

The first time I penned that cow, she expressed her displeasure by kicking a corral gate, then kicked it again for dramatic emphasis. I happened to be taking shelter behind that gate at this particular point in time, and my head flippety-flopped back and forth like one of Mike Tyson’s punching bags.

With cows like that, I’m not sure a high-tech gate system would work out.

As a rule, you see, your average piece of high-tech equipment isn’t nearly as hard as a rancher’s head. And nobody with enough sense to program a computer would have anything to do with that cow anyway.

• Donnis Baggett is publisher and editor of The Bryan-College Station Eagle. His e-mail address is dbaggett@theeagle.com.