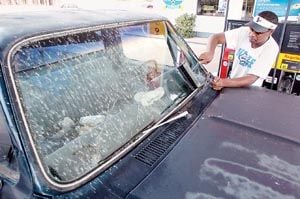 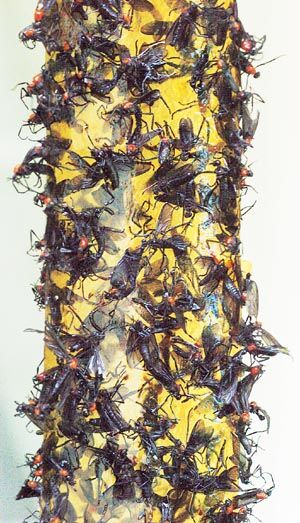 Mark Chase of Brookshire cleans off dead lovebugs from his windshield Wednesday at a gas station on Villa Maria Road in Bryan.

Fay Shepherd of south Brazos County says she put out three strips of fly paper Wednesday that were filled with lovebugs within 10 minutes.

Description: The flies are black with a reddish-orange area on top of the thorax and a pair of smoky-colored wings. They are about a half inch long and are weak fliers.

Life Cycle: Large numbers of adults emerge primarily in the spring and fall. Males and females fly and couple in open areas along roadways, appearing to swarm in weak flight. Although females live for only a week or so, adult flight activity lasts for about 4 weeks. After coupling, the female deposits her eggs in swampy areas and ditches. The larvae develop through several stages, becoming about 3/8-inch long and slate-gray with dark heads. They then pupate in the soil and emerge as adults in about eight days.

Texas A&M University entomologist Jim Olson said the bugs tend to flock to highways because, as weak fliers, they need the heat updrafts to keep them aloft. Their natural habitat is along river and stream beds, which is similar to the ditches along Earl Rudder Freeway, he said. Lovebugs also are attracted to contrasting colors.

Olson’s tips for keeping your car safe from lovebugs:

• Rub a layer of petroleum jelly on the front edge of your hood to help prevent bug stains. If you do have stains, wash them off quickly — otherwise, the acidic juice will begin to etch away at the paint.

• Attach a square of screen wire inside your vehicle’s grill so the bugs won’t plug up the radiator and cause the car to overheat.

The grand white house on Brazos County’s Woodlake Drive looks these days like the setting for a bad horror flick.

Hundreds of tiny black flies swarm around the doors and windows. Even more cling to the corners of the house. And throngs of the insects flit aimlessly throughout the yard.

Then there are the dead ones — scores of insect carcasses litter the front porch, scattered on the concrete and patio furniture, even piling up in a pair of sandals.

“Would you like to be at a picnic in this?” exasperated home owner Fay Shepherd asks, standing in her back yard as the little creatures hang in the air around her.

For Shepherd and her husband, Opie, there is nothing to love about lovebugs.

During that time, the bugs have become a nuisance for just about everyone in the Bryan-College Station area, where, Jackman said, a summer of heavy rain ensured a hearty fall population of the little insects known best for their coupling abilities.

It is the largest fall swarm of the insects in the Bryan-College Station area that Jackman can remember.

Highway motorists often get the best glimpse of the lovebugs — usually joined end-to-end in pairs — in the moments before they splat across their windshields. The females, which carry the eggs, always are larger than their male partners, Jackman said, and often are seen dragging the males around as they mate.

“A lot of insects have fairly elaborate coupling mechanisms, or genitalia,” Jackman said. “Once they get coupled, it’s hard to get uncoupled, so they couple for an extended period of time.

“They remain coupled for hours.”

After the two manage to break apart, Jackman said, the female then flies away to lay her eggs. The larvae mature over the next few months, before hatching the following spring, he said.

The lovebugs, which typically make an appearance in the spring and again in the fall, generally live only four to five days, he said.

Though they seem to provide the most problems for motorists, the little black creatures aren’t just swarming along the highways. They’re also hovering around football practice fields.

Harry Francis, assistant athletic director for Bryan schools, said that although his high school football players’ helmets aren’t covered in bug juice, the little red-and-black insects are fluttering around. He and the other coaches are especially careful, he said, when driving around the field on John Deere Gators.

“I know I better keep my mouth shut,” he said with a laugh. “They are everywhere. They’re in your hair, in your ears. They like to get in all kinds of places.”

Texas A&M University entomologist Jim Olson said it could be another 10 days or so before all the lovebugs finally die off.

Until then, there is at least one person who isn’t singing the blues over the lovebugs. Charlie Dean, assistant manager at Shammy Car Wash in Bryan, thinks the insects are downright lovely.

The twice-yearly advance of the lovebugs has prompted Dean and his employees to develop a special system to wash the insects’ remains off vehicles. The trick, he said, is soaking the stains with a good bug cleaner.

Currently, about 80 percent of the 150 to 200 vehicles stopping by the Shammy Car Wash each day have windshields coated with lovebug remains, Dean said. And that, he said, has made for good business.

“They want the lovebug special,” he joked.