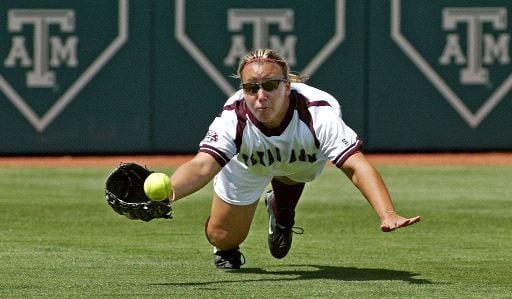 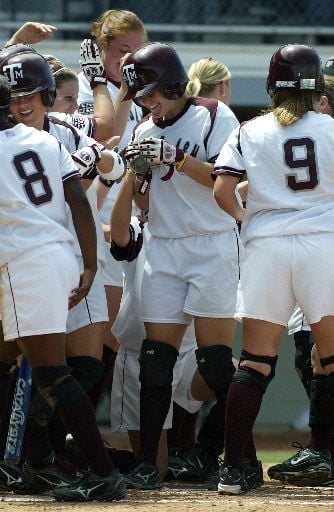 Texas A&M's Holly Ridley hit a two-run home run to cap the Aggies' four-run first inning. It was Ridley's fourth homer of the season, and A&M held on to beat Missouri, 4-2, behind the pitching of Megan Gibson.

It was Jo Evans "Bobblehead Day" at the Aggie Softball Complex, but it was Texas A&M pitcher Megan Gibson whose head needed to be on a swivel Saturday. Every time the sophomore turned around, the Missouri Tigers had someone in scoring position.

Gibson pitched out of five jams in A&M's 4-2 victory, striking out a career-high 10 to help the 15th-ranked Aggies remain a game ahead of Nebraska in the Big 12's battle for second place.

Gibson (15-4) issued just one walk but set Missouri down in order only once - in the seventh inning when the crowd of 1,153 stood cheering, a few fans even waving their bobblehead dolls of A&M's head coach.

"I think maybe I was mentally tougher [with runners on]," Gibson said. "I knew I couldn't let them score. I was really focusing on every pitch I was throwing, where I needed to throw it to keep those runners where they were."

It didn't appear early that A&M would need much pitching from Gibson after the Aggies took a 4-0 lead in the first inning.

Leadoff hitter Jamie Hinshaw, who had an eight-game hitting streak snapped in a 5-0 loss to Baylor on Tuesday night, homered on the second pitch she saw.

"Jamie Hinshaw set the tone for the whole game," Evans said. "When you have your leadoff [hitter] hit a home run, and the crowd gets into it right from the get-go, I think that's huge."

A&M threatened to make it a blowout as Rocky Spencer singled, and Jami Lobpries and Beverly Rowan walked to load the bases after Ridley's two-run blast. But Missouri right-hander Jen Bruck (18-15) retired the next two batters and went on to set down 17 of the last 18 batters she faced, inducing 14 groundball outs. The lone Aggie to reach during that stretch was Scarborough on a fifth-inning double.

A&M's defense wasn't as sharp as its first-inning offense.

Aggie second baseman Lobpries booted a potential inning-ending double-play ball in the second inning to put runners at second and third. Gibson retired the next three batters to get out of the jam.

Missouri threatened to tie the game in the third inning. Singles by Bruck, Micaela Minner and Amanda Renth along with a fielding error by shortstop Ridley cut A&M's lead to 4-2 with two runners still on base. But with relief pitcher Lisa Gorzycki warming up in the bullpen, Gibson survived the inning by striking out three straight.

"Gibson didn't feel sorry for herself because she made great pitches, and we didn't make plays," Evans said. "She went out there and said I'm going to be this much better."

The Tigers were 2 for 14 with runners in scoring position. They stranded 10 runners, including three at third and four at second.

Missouri had another chance to score in the fifth when one-out singles by Renth, Jaci Schuyler and Alli Kennewell loaded the bases. Kennewell reached when an inside pitch hit the knob of her bat as she jumped back, and the ball bounced into fair territory for a perfect bunt.

It didn't unnerve Gibson, who struck out the next two batters.

Missouri's last threat came in the sixth when Buck doubled with one out. But true to form, Gibson retired the next two.

"Gibson was outstanding," Evans said. "She had great control of her pitches. Her curveball was great. She was mixing her change-up, and she had great composure. She showed great leadership today."

Gibson lasted only four innings in her last outing, giving up six runs in a 14-6 loss to Iowa State.

This time, she made sure she was around for the ending.

"[Gibson] stayed very sharp, very focused," Evans said. "I thought she was prepared for every single pitch. She knew what she wanted to do with each of those pitches, and I think that made the difference in her game. And she kept the ball down."

But Gibson had struggled in her last four starts, allowing 16 earned runs in her last 23 1/3 innings.

"I worked real hard with the pitching coach [Ali Sagas] this week and talked with [hitting] coach Wigs [Rich Wieligman]," Gibson said. "I just knew there was something wrong with my pitching."

Gibson says the coaches told her to trust her change-up and keep her curveball down, advice she heeded Saturday to help A&M maintain its second-place position in the Big 12 standings.

NOTES - A&M, which had four errors against Baylor, had three against Missouri. "I was very frustrated with our defense," A&M coach Jo Evans said. "I thought on those plays, we just weren't aggressive, and that's frustrating to me because we need to be better. Our team needs to make a commitment on how they play the game out there. I'm not happy at all with us making errors."

Texas A&M's Holly Ridley hit a two-run home run to cap the Aggies' four-run first inning. It was Ridley's fourth homer of the season, and A&M held on to beat Missouri, 4-2, behind the pitching of Megan Gibson.