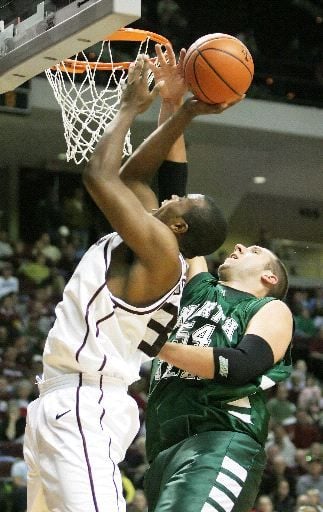 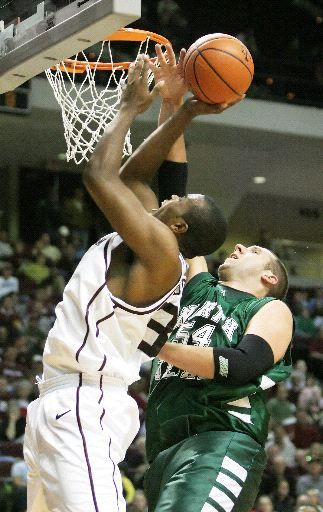 Falling under the "be careful what you wish for" category, Texas A&M survived its second straight crunch-time scare at Reed Arena, this time surviving North Texas' attempt to win at the buzzer.

North Texas' Kendrick Davis missed a 3-pointer with 1 second left as the A&M men's basketball team held on for a 72-70 victory Tuesday in front of 5,348.

North Texas (2-3) had 13.7 seconds to set up the last shot. Davis said the Aggies (5-0) did a good job of forcing the Mean Green to alter its plan, and Davis eventually had to create his own shot from the right wing with A&M's Joseph Jones in his face.

"That's a shot I practice all the time," Davis said, "and I'm the type of person, I'm going to live with it whether I make it or miss it. I feel I can make it, and I'll shoot that shot again any day."

While A&M shot just 38 percent from the field, Jones had a career night. The 6-foot-9 sophomore scored a career-high 35 points and tied his career best with 13 rebounds.

It's the most points scored by an Aggie in 11 seasons, but it almost wasn't enough. And Jones said after the game there was a "lot of silence" in the A&M locker room.

"It's frustrating to me to see that, as a team, we're not doing what we need to do to put teams away or to win games the way we're supposed to," Jones said.

On Monday, A&M's Billy Gillispie said he wished every non-conference game could end close. The second-year coach, of course, also said he wanted his Aggies to win, and he got his wish for the second straight game.

A&M had to hold off a charging Penn State on Saturday for a 60-55 victory. Then against North Texas, the Mean Green cut A&M's lead to one point five times in the second half. Four times, North Texas had a chance to tie or take the lead.

The Aggies dodged all of it, and Gillispie pointed to some of the positives, specifically A&M's second half free-throw shooting (12 of 14) and its ability to feed Jones in the post. But Tuesday's crunch-time survival also included some things Gillispie didn't want to see.

"We did do some [good] things there at the end, but we just made so many bonehead plays," Gillispie said. "We won the game, but we got whipped. We're lucky we won."

And Jones may have been lucky to walk off the court still standing.

A&M's go-to guy in the paint fought through tendinitis in his knee and played a game-high 39 minutes. The only time he came out was late in the first half - so he could run to the locker room to throw up during a timeout.

"He was hurt, and he didn't want to come out of the game," Gillispie said. "He's a special kid. He's just got a little tendinitis in his knee, and then he got hit a couple times. And then he had to go throw up ... you know, the regular old Joseph game. He's a tough kid."

The Aggies pushed their streak of regular-season victories over non-conference opponents to 18. They host Grambling State on Saturday at 2 p.m.