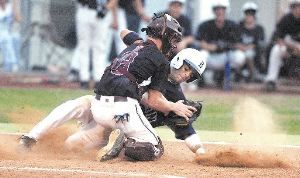 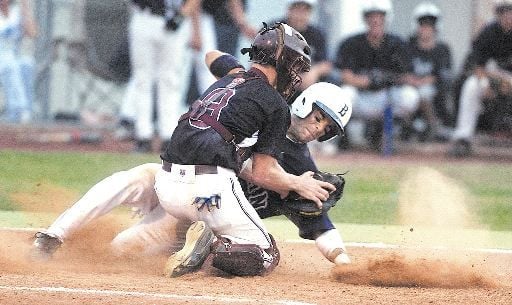 By JERRY WAGGONER Special to The Eagle

The Tigers, who already had clinched the district title, finished with a 14-0 record in 13-5A play and moved to 21-6 overall. Bryan fell to 19-9-1 and was in second before the loss but fell to third in district because Belton knocked off Copperas Cove on Friday.

The Tigers have a first-round bye in the playoffs and will play Cinco Ranch on May 6 in a warmup game at Tiger Field. Consol's first playoff opponent will come from one of two Austin districts, both of which currently have a three- and four-way battle going on for the final playoff berths.

"I hope it is a three-way tie, so we can go over on the weekend and scout all the teams," said Consol Coach Chase Mann."

Bryan's playoff picture isn't so jumbled. The Vikings will play Klein Collins at a site and time to be determined, and Bryan coach David Powers said he and his staff already have scouted the school.

The second Crosstown Showdown of the season was another nail-biter. Consol's Lance Robinson pitched six innings of two-hit ball to earn the victory, while Travis Lawler pitched the seventh for the save.

But the Tigers walked the leadoff Viking five times, and Consol needed good defense and six strikeouts by Robinson to keep Bryan at bay.

At the plate, Consol had just seven hits, far below its recent average, as Bryan starter Blake Batten kept the Vikings in the game with strong pitching.

Batten also tripled in the first, but Bryan couldn't knock him in.

"Batten was coming off an injury and I thought did a good job," Mann said. "When you get right down to it, our defense had no choice but to play well with all those leadoff walks. Robinson did a good job and battled all the way. [Bryan] got only one big hit by Batten, and keeping them away from the big hits was Robinson's job and he came through."

Consol got all three of its runs in the third. Wes Schill led off with a single to right center. Schill raced all the way to third when J.T. Huckabay laid down a bunt single, and the throw from first to third in an attempt to get Schill sailed over the third baseman's head, allowing Schill to score. Huckabay eventually scored on a single by catcher Nick Anders, and Zach Smock drove in Anders with a double down the right-field line.

The Tigers had only one other base runner the rest of the way.

The Vikings rallied for their lone run in the top of the fourth. Carlos Ponce walked, moved to second on a balk and advanced to third on a sacrafice bunt by Josh Hathcox. Ponce scored when Collin Janssen topped a high hopper to Smock at first base who tried to throw out Ponce at home. The only other Bryan hit came one batter later when Kyle Zdunkewicz singled sharply to right.

Batten allowed seven hits and threw just under 70 pitches. Robinson threw almost 100 pitches before being lifted for Lawler in the seventh.