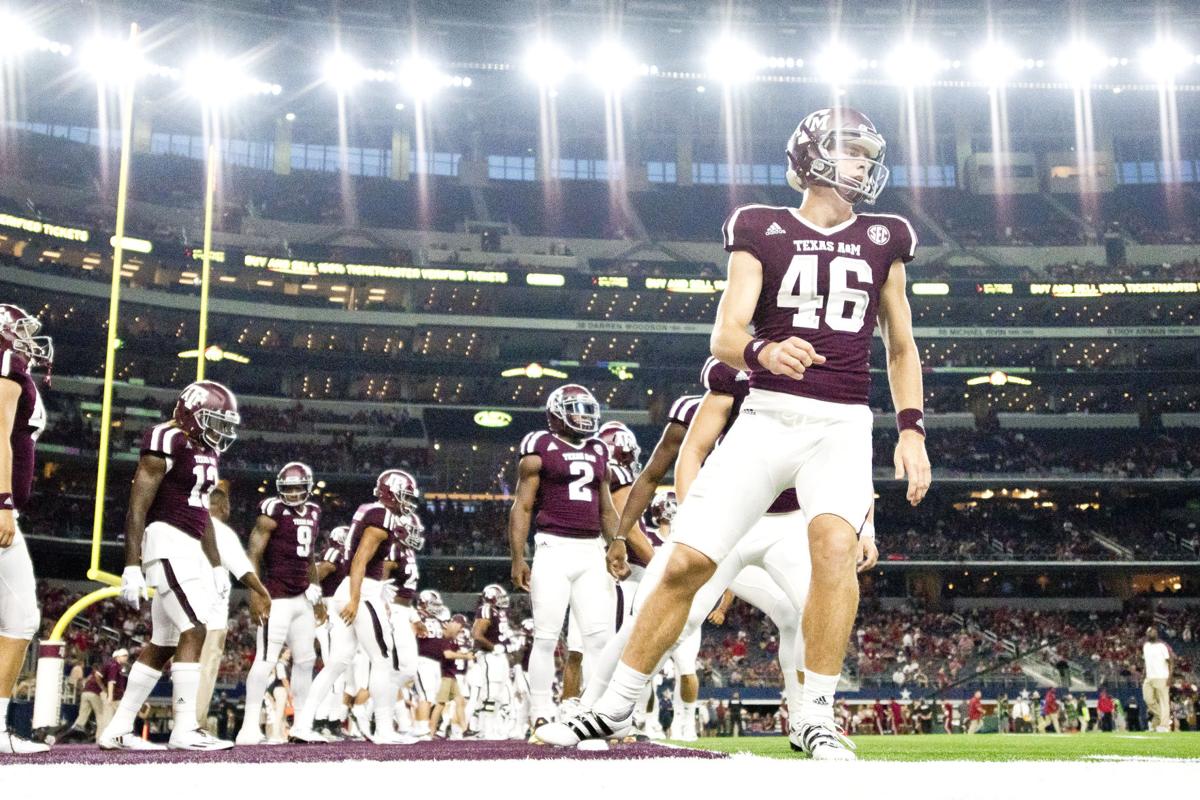 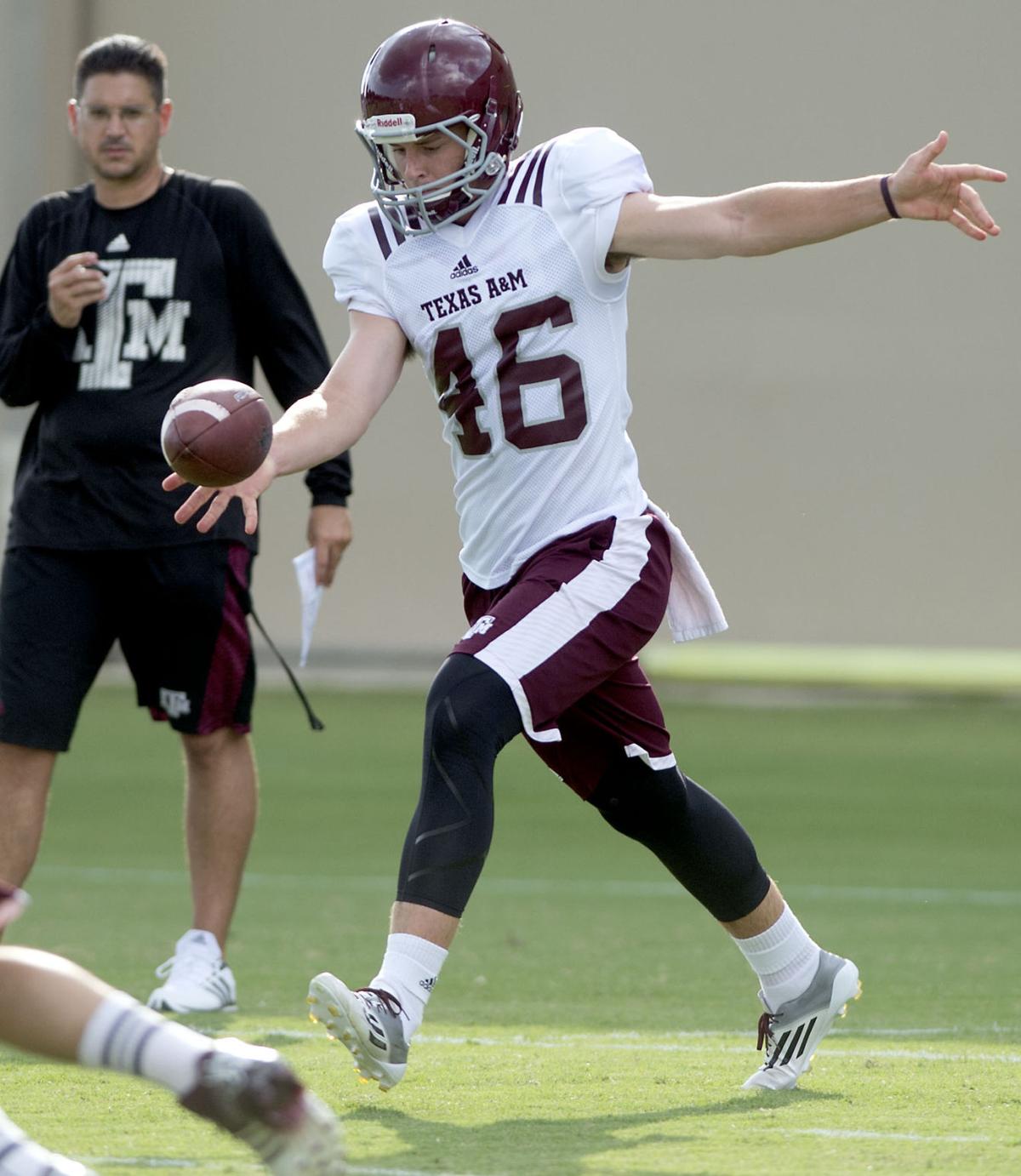 Texas A&M junior Shane Tripucka can't throw a football like his grandfather did or shoot a basketball as well as his uncle, but he's cornered the family punting market.

Tripucka's late grandfather Frank quarterbacked the Denver Broncos in their inaugural season in 1960 and threw the first touchdown pass in the old AFL. His uncle Kelly led the Notre Dame men's basketball team in scoring four straight years and became a two-time NBA all-star, once setting a Detroit Pistons single-game record with 56 points.

Those are just the two most famous Tripuckas in the family's long line of professional and college athletes, which includes his father Chris (college football) and cousin Jake (college lacrosse).

"They are all these big athletes, all 6-foot-7 playing basketball and lacrosse, and I turned out to be a punter," Tripucka said. "It works for me, and I'll take that route. It's kind of nice because you are kind of competing against them. I wouldn't say it's a pressure because they are always there to support you."

Some of his best and earliest advise came from his father, who can spin his own stories as the quarterback who joined the Boston College football team the same year as Heisman Trophy winner Doug Flutie.

"I played receiver and tight end in high school, and dad just always had me keep at [punting] and said maybe something will happen. If you don't play receiver or tight end, you can kick," Tripucka said. "I got to my senior year in high school, got [injured] in our preseason scrimmage and our coaches said, 'We'd rather have you punt because we don't want you to get hurt,' and I just ended up punting from there."

Punt he did, earning All-America honors his senior season at Allen.

Patience is a virtue

Unlike most of the Tripucka athletes, Shane has had to wait longer for his opportunity in college.

He arrived at A&M in 2013 and worked on his craft with little reward while sitting behind Drew Kaser, who is now punting for the San Diego Chargers. Because fans hadn't heard of Tripucka when he earned the starting job this season, it caused a little concern over his ability to handle the job.

"Every year we come into this thing with a bunch of questions about kickers, punters, snappers, and we just get to a point in the year where we expect them to be good," A&M head coach Kevin Sumlin said. "People are worried at the start of the year, because no one ever heard of them. Shane has proven himself."

Tripucka's work has paid off in more than one way. Sumlin rewarded the former walk-on with a scholarship just before the season opened.

"It gets tough sometimes, sitting behind a guy as good as Drew is and now he's in the NFL," Tripucka said. "You are itching to play, but it's a great learning experience and you get to learn from somebody who is going to be in the NFL now. To get rewarded after three years of that is amazing. My teammates are the guys who pushed me every day to get better and work hard for [the scholarship]."

Tripucka is averaging 43.4 yards a punt, good for 30th nationally, and his average looks even better when you consider he's pinned 17 of his 39 punts inside the opponents' 20-yard line.

"Although his average maybe hasn't been as high as guys who've been here the last few years, if you look at his accuracy and limiting returns and his pinning people down inside the 20, he's been very, very good," Sumlin said, pointing out two of Tripucka's punts against Alabama that helped A&M stay in the game.

Tripucka booted one of them across the field and pinned Alabama's returner against the sideline, and he sailed the other high enough that teammate Josh Reynolds had time to run under it and catch it at the Crimson Tide's 1.

At 6-foot-3 and 210 pounds, Tripucka may not be as tall or as big as many of his family members, but he can still mix it up with others athletically. During special team drills the day before games, Tripucka doesn't punt the ball. He throws it, which has impressed many of his teammates, including A&M quarterback Trevor Knight.

It probably would have also caught the eye of grandpa Frank.

NOTES -- Frank Tripucka played in the both the NFL and AFL from 1949 to 1963, including part of the 1952 season with the Dallas Texans. He died in 2013 at age 85. ... Kelly Tripucka played 10 years in the NBA, averaging 17.2 points, 3.8 rebounds, three assists and one steal per game for the Pistons, Utah Jazz and Charlotte Hornets. ... Shane Tripucka's uncles Mark, Todd, Tracy and T.K. also played college sports. Mark played quarterback at UMass; Todd and Tracy played basketball at Lafayette in Pennsylvania; and T.K. played offensive line at Fordham.

Texas A&M's Trevor Knight is proof that the NCAA's graduate-transfer rule can benefit the student-athlete, and so are former Aggie quarterbacks Matt Joeckel and Jameill Showers, who had less publicized finishes to their collegiate careers.

Texas A&M senior Shane Tripucka has quietly continued the Aggies' tradition of excellent punting, following in the footsteps of Drew Kaser, who is punting for the Los Angeles Chargers.